by Mario Figueiredo on November 30, 2012 in Gaming

Some games just like to fly low. These are dangerous and you should be aware of them. They make their approach avoiding your radar and before you can say “who? what? why? But…” they are already in your territory, blazing at your brain cells and killing every bit of your carefully cultivated productivity. Be warned, be aware.

Released January this year, Defender’s Quest: Valley of the Forgotten is one such game. Like the valley, it went mostly forgotten until just recently when it silently and with little fanfare debuted on both Steam and GOG. A game that flies under your fine-tuned radar shouldn’t be much of a concern. Right? Well, I got a hold of it, I played it and I’m here to tell you that I’ve had better days in my life; back when I used to feed myself and keep the house clean. Who? What? Wh… 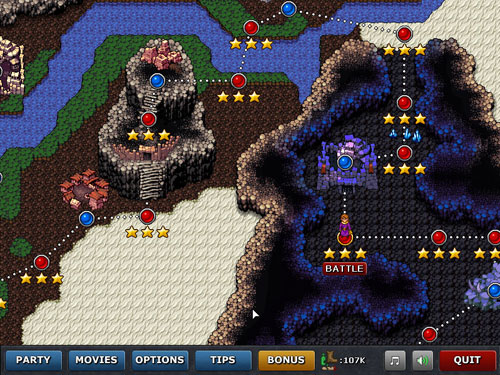 Defender’s Quest: Valley of the Forgotten

A librarian and a witless barbarian,
an ice casting fire mage, don’t forget the sage.
An annoying archer and sword marcher,
plus a dragon sheep catcher.
These are all your friends complete,
you will find in a valley named Pete.

Right. Yeah, so where was I? Ah, yes. The RPG element of Defender’s Quest is marvelously implemented. Your defensive army is made up of you-yourself playing as a spell-casting librarian (which all librarians would like to be able to be), plus an entourage of loyal companions ranging from nitwitted sword-spinning barbarians to fire mages who only know how to cast ice spells (I’m not making this up!). There’s also dragons. Big, mean, powerful dragons who like feral sheep.

Each companion type has its individual stats and skill tree. As you progress in the game, you can level them up and distribute skill points, hoping to make your army the killing machine required to tackle the ever increasing legions of monsters. Distributing skill points isn’t the end of it. As you play through you will find unique and powerful items you will wish to give your companions to further boost their fighting abilities. All these elements are crucial for success and the RPG acronym wasn’t thrown into this tower defense game as an afterthought, but rather as an intrinsic ingredient that will shape your capabilities and define your tactics. 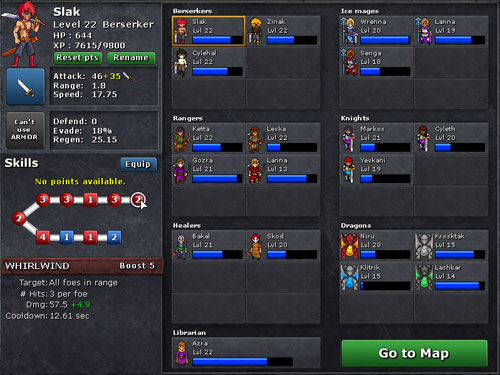 You will face varied and interesting enemies that will force you to keep your wits about you. In addition, you will face boss monsters from time to time. The enemies in Defender’s Quest are well-designed and will challenge you. However, the game difficulty can be set by you at any time. Individual battles can be fought at any difficult level you choose and later be revisited for harder difficulties, after you have leveled enough or if you are no longer in the mood for a casual game. You can also set the game pace from completely paused to 4x the normal speed (you can even take certain actions while the game is paused). Defender’s Quest also allows you to revisit old battles as many times as you like, in any difficulty you like. 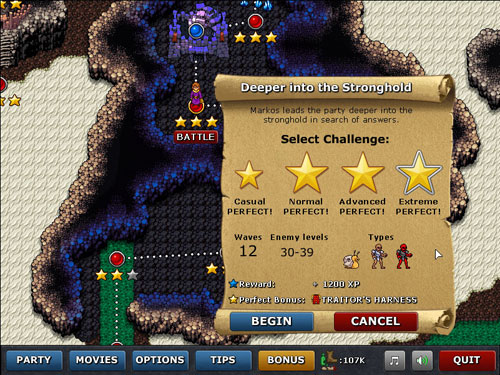 It’s just perfect. Defender’s Quest lets you change from a casual to an insanely difficult game without having to load a different savegame. From a slow moving battle, to a fast moving one. You can grind endlessly for experience or take your battles to the doorstep of impossibility. This is a game for all types of gamers. You choose how you want to play it and let no one tell you otherwise. Lars Doucet and Anthony Pecorella know how to make games! I want their t-shirts.

Tactics-wise, the game introduces a whole row of different possibilities that aren’t just tied to how you place your defenders in the battlefield. During battle you can change any individual defender combat attitude. You can tell him to favor boss monsters, to attack only weak enemies, to use the more powerful skills on stronger enemies, etc. In addition, your companions have boost levels that you need to increase in order to give them access to their strongest skills. However, you spend precious energy (called Psi) every time you boost their abilities, which will sometimes force you to make tough decisions. 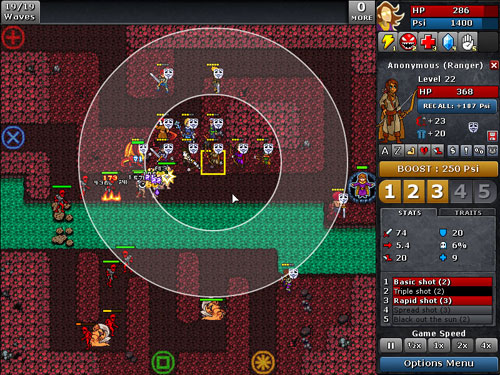 Other than fighting through the story, at a certain point you will gain access to a list of ever-increasing challenge bonus battles (including two endless battles). These will offer you yet more experience as well as precious unique books to augment your protagonist Librarian fighting skills. Bonus battles will be unlocked once you earn enough blue and yellow stars from fighting in normal battles.

Once you complete the normal game, you will unlock the New Game +. This is the story all over again, but at a much harder level, with even better rewards and the ability to upgrade all those unique items you found during the normal game. The New Game + will also have its own bonus battle list.

Do you have an Internet? I want to phone home!

Let’s quickly deal with this unpleasant business. By default, Defender’s Quest will phone home and send to the developer’s server your playing statistics. What exactly, we don’t know. We are guaranteed however that no personal information is passed, only data on how we play the game. This can be disabled in the game’s Options screen, under a rather equivocal Miscellaneous button. But its turned on by default.

Now, I can for sure understand that data of this type can be of a lot of use to any game designer, but the decision to turn it on or off is mine, never of the game authors. This option should have deserved a whole lot more visibility and require explicit permission. An implicit permission is how things used to be done before we knew any better. Not anymore. It is also expected that these things will be thrown at our face right on the onset of the welcome screen, not to be hidden inside some obscure settings button.

Defender’s Quest bridges RPG with Tower Defense and comes up with pure entertainment. It’s a great investment in fun. I’m currently slightly addicted to it and, needs to be said, its been delaying this review for the past few days. How it hasn’t come under my radar until now is something I need to investigate further. Someone, somewhere, is going to pay… 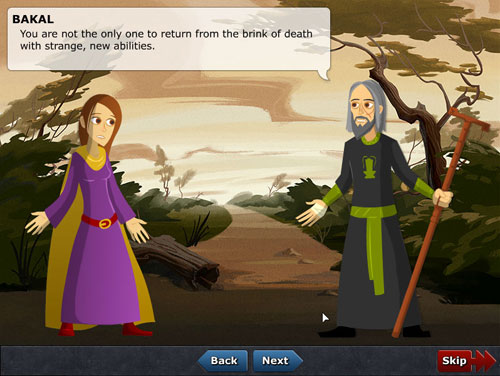 Nicely done pixel art, a healthy dose of casual humor, a good deal of challenge; the game only slacks in the sound department. There’s a charming, slightly retro look to it, coupled with a good deal of taste for RPG stats and skills. From the party and battle screens it becomes obvious there is tactical goodness to explore all around. With its strong unabashed commitment to RPG – and with Tower Defense done in a way that will make you want to keep coming back for more – Defender’s Quest really defines a perfect hybrid genre. 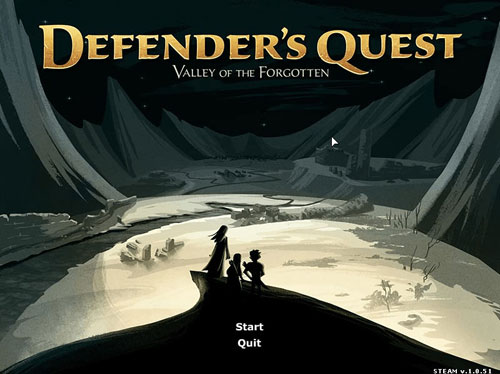 There’s a whole lot more than can be said about Defender’s Quest. But every word I put in here, is one more word stopping you from going out to play the game. So, go do it. Grab your party and visit the Pit, a valley filled with tower defense fun.

Defender’s Quest: Valley of the Forgotten