So, Deus Ex: Human Revolution (aka DX:HR) has been out for a couple weeks, and undoubtedly you’ve seen reviews all over the place by now. Of course, as many fans of the series know, no Deus Ex game (even the crappy Invisible War) has been small enough to properly review anything more than its basic mechanics within a week of its launch.

That’s why here at TG, we let the others charge ahead and write their reviews early – and now we can give you the stuff they all gloss over. In many games, that stuff is all the extras and the goodies and the bonus tweaks – but in the Deus Ex franchise, those extras ARE the game.

The original DX was known as an amazingly open-ended choose-your-own-adventure style game wrapped up in a first-person interface, with different early game choices putting you on the same maps with completely different objectives later. Multiple paths crossed in ways that sounded more like a John Grisham meets Michael Crichton novel than a video game, and the “augmentation” style leveling system meant that you could never explore ALL of the paths in one playthrough.

The game’s plot wrote you in as a pawn between huge world powers, and stepped you in at the shallow end – lending a pound of truth and a bucketload of believability to the feeling of getting mixed up in something far greater. Even its endings left you wondering whether you made the right choice – and I note the plural because there are several different ones. 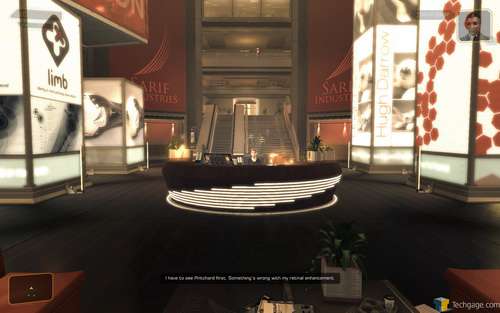 Deus Ex stripped away the “feel good” sense of accomplishment behind your objectives and laughed at you for your optimistic desire to save a world you didn’t even understand. I grew to love and hate the story at the same time – amazed at the intricate and believable writing but hating what I felt was a world best described as hope in freefall.

Good and bad blended together so well that you could justify almost any action – which was made harder by the fact that you could do much of what you thought about. In the end, the game has sat in my “Top 5” since it came out – never to be toppled as my #2 gameplay experience ever. I’ve replayed it several times, and each time I find a new thing or try a different approach – and am always rewarded with things I’d not seen the last time through.

Now forget that story, here’s a new one…

Fans of the series will have a lot to look forward to, but let’s get one thing straight – DX:HR is a prequel, and it will not require any knowledge at all of the first two games. Though you do get rewarded with a lot of insights into the history of the Deus Ex universe (character ancestors, for example), playthrough of the original is a bonus and will mostly just help you feel instantly at home with the game’s mechanics.

DX:HR casts you as Adam Jensen, the head rent-a-cop for Sarif Industries – a big biotech company based out of Detroit in the near future. The company has created a tremendous scientific breakthrough called augmentation, which involves the fusing of digital circuits and mechanical “muscles” to a person in order to restore limb function.

At the story’s opening, the technology is still somewhat new – but by the time you really get into the world, the company has grown tremendously and augmentations are a hot item – and a cause for debate. Some say that it’s uncapping our evolutionary power, while others argue that it’s ruining everything that it means to be human. There’s merits to both sides of the debate, and it doesn’t take more than a single mission to understand that there’s a downside to “augs” – a need for lifelong treatments by a drug called Neuropozene, which prevents painful (if not fatal) body rejection but is addicting in its own right. 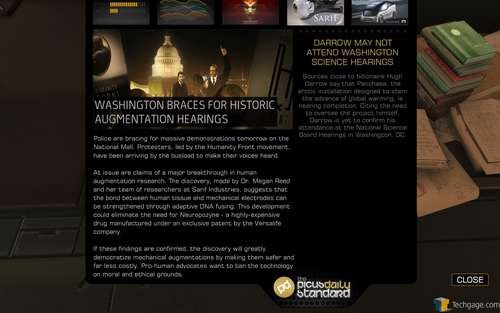 Your own augmentations are forced on you by your employer in a lifesaving operation shortly after the start of the game. Sure, they give you some great abilities – but it brings a bit of personality to the “augs or no augs?” debate that you hear all around the world. After all, you weren’t given a choice in your augmentation – and being augmented gives rise to some prejudices that must be overcome (by persuasiveness or force) by key figures in the game.

It doesn’t help that your augs are a “gift” from your employer that can keep you on a short leash – betray him, and the world just became much more dangerous for you. Throughout early wanderings in the Sarif headquarters, you’ll stumble on bits of correspondence that let you know they have you just where they want you. It’s a chilling feeling, and adds to the “pawn”-like feeling of the original.

The rest of the story involves considerable spoilers, as even the introductory mission sets the tone for a variety of sidequests later in the game. If you’re a proper fan of the series, you’ve probably not even watched many of the videos before firing up the game, and if not… well, there are enough rehashes of the story specifics that I don’t need to include another one here. 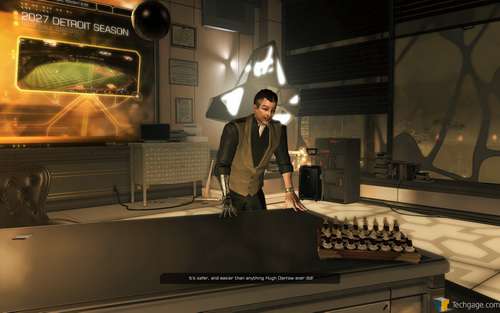 Outside of the narrative, the story transpires in “chapters” that you’ll only be able to identify in the loading screens. When not on a loading screen, you move from chapter to chapter seamlessly, and you instead feel constrained only to the city you’re in, which the game calls “hubs”. Each city is filled with people, places, sidequests and also some little extras that don’t really do anything except make it feel a lot more alive. The game will reward you for finding these little out-of-the-way spots, which is a neat (if a little immersion-breaking) way of thanking you for taking the time to look around your environments – whether it be a few credits (the game’s currency), a couple rounds of ammo, or just a bit of experience.

City streets have people on them, most of which have something to say, are individually voiced and well-rendered. Alleys have punks and bums, streets have police and citizens, and the world feels alive. There were even points where trash blew up (realistically) from the ground in alleys. All of these things contribute greatly to the feeling that you’re not just in a “filler” space, but in a real place. Even the exits are blocked believably – a car accident fills a Detroit tunnel, complete with a few people yelling at each other and a police officer trying to resolve the dispute. Trains carry you from area to area in a Chinese metropolis, letting you feel like areas that DO get broken up are done so well as to feel believable.