One of the greatest things about the Deus Ex franchise has been the very many ways that you can complete any and every mission in the game. There are options for stealth, for heavy artillery and for good ol’ run-and-gun techniques.

Whichever you chose, you’d better have a plan to clean up your mess (or make more), as enemies who found tranquilized or killed partners, blown out doors, etc. will always alert the whole place. Though Deus Ex: Invisible War constrained the game world compared to the original (ridiculously so, in fact), even it provided some simple requirements for disposing of bodies and slinking about unseen.

DX:HR functions in much the same way, though its scope is very much more like the original. Missions almost always have both a violent and non-violent resolution, and every side mission can be refused. Many of these side missions crop up amid your normal business, but some of them are quite out of the way and are discovered only by going places that you had no business wandering into to begin with.

Main mission paths provide numerous (and I use that term specifically) methods to get to your objectives – even the very first mission provides ductwork to crawl through and areas to slink around that can get you most of the way without even seeing an enemy. The trouble is, you have to find them – which is a risky strategy on its own and often involves exposing yourself without being prepared to fight back. 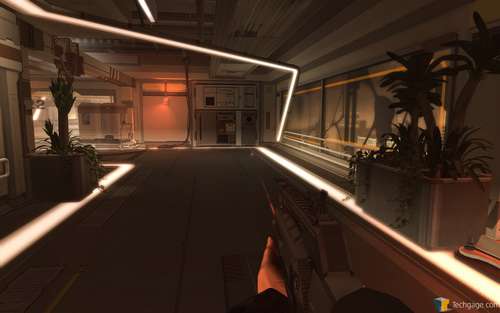 Weapons in DX:HR allow you an immense amount of personal choice – from the Doom lover’s double-barreled shotgun to my personal favorite, the silenced 10mm pistol. Further to the extremes are rocket launchers, rail guns, crossbows, sniper rifles, and a host of other amazingly potent items, all of which can be enhanced with bonus weapon upgrades that you can find lying about… making no two guns the exact same.

Along with the wonderful choice of lethal armaments comes a host of non-lethals as well, including a tranquilizer rifle with a scope for distance and a stun-gun for those up-close-and-personal moments. Knocked out enemies will not come back during a mission (if they’re not found by comrades who wake them up, at least), making them just as effective as kills – without the moral issues.

If you don’t fancy using your weapons (or are out of ammo for the weapon of choice), there’s the option of getting down and dirty with your hands at a cost of one cell of energy – which is a much more limited resource in some ways than ammo (we’ll cover energy in just a minute).

Takedowns can also be either lethal or non-lethal – sneak up behind someone and do a quick tap to knock them unconscious (in a pretty awesome looking scene), or hold the same button to drop a razor blade from your sleeve a la Wolverine and put them down permanently. Either way involves a little finesse, as you need to sneak behind the intended victim to perform the maneuver, but it makes a great option at times and a nice change of pace. It also lets you switch it up between being nice and being mean on-the-fly, no matter what your weapons loadout. 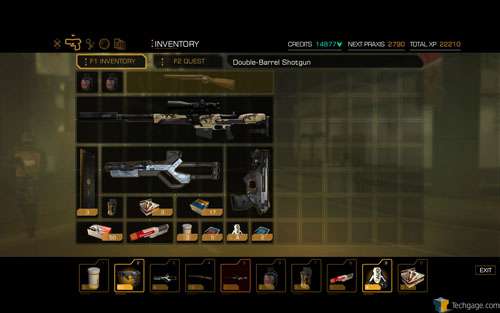 Weapons (and ammo that isn’t in the clip) take up inventory, which is quite limited in space. Inventory can be upgraded in the augmentation process (more on this shortly), but management will very quickly become key to your gameplay. Fortunately, DX:HR does something no other game in the series did – it provides an auto-manager that rearranges inventory for you to find the absolute best use of space at any point. You can choose to disable this feature, though frankly I can’t imagine for the life of me why you would do such a thing.

Suffice it to say that a couple extra augmentation points on inventory are well-spent unless you like playing bare-minimum on the weapons loadout. By the time I was done with my first mission, I was already running out of space. Along with the weapons and ammo will come a host of small items – grenades, nutrients, etc. Each of these will take up precious space in your pack, so finding the most efficient arrangement is important.

Using what you’ve got

Along with your arsenal, you also pack your augmentations. Augs get upgraded through “Praxis points”, which can be purchased/found in Praxis kits or earned through experience over time. The experience point concept is nicely woven into the story (though, oddly, not until you’ve already earned a bit), describing how you can’t simply “turn on” so many enhancements at once without putting the body further in shock. I wish it came up earlier in the story, as I’d not found out about this “logic” until well past the point where it felt like a random ‘meter’ gauge… but it is there. 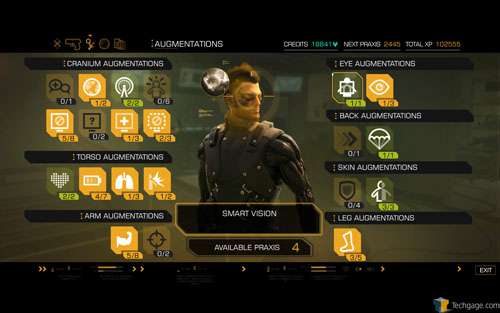 The augmentations that you have available to you are tremendously varied – far more than in DX:IW and even a little more than in the original game. There are stealthy ones (move silently, see enemies from farther away or through walls, even fade from sight for a short time), technology ones (hacking terminals, taking control of gun turrets and robots), movement ones (jump higher, fall safely from heights, sprint longer) and management ones (inventory increase, more energy cells, and faster recharge). Probably my favorite of all of the augs, though, is the personal influence augmentation – it has given me a lot of variety in how I’ve solved missions, as well as many insights into key characters.

Many augmentations, along with your bare-handed “take-down” methods, are powered by energy cells. You start off with two, and any energy cell that is not completely depleted will recharge over time. One energy cell will always recharge, whether fully depleted or not – leaving you at least one energy to be able to handle take-downs and short uses of other powers in mission-critical times. Otherwise, you’ll be refueling yourself with nutrients from the surroundings, mostly from energy bars (think of a protein bar or a meal replacement bar). Energy management is a vital part of using certain augmentations like cloaking or moving silently, and is further complicated by the take-down methods consuming a whole cell at once.

I know it sounds like I’m really hammering home these take-down methods, but honestly I’ve used them a LOT in the game. Ammo is very sparse for my true weapon of choice, the tranquilizer gun – and I don’t want to waste inventory space for a stun-gun and ammo when I have a built-in method. I play a no-kill approach most of the time, so I’ve enjoyed having this option at my disposal regularly. It also adds a LOT of “basic” depth – you’re playing a massively augmented ex-cop – if you couldn’t take someone down with your hands, it would just feel… shallow.