Hacking in the original Deus Ex was essentially a “yes or no” process – either you had the skills, or you didn’t. If you tried to hack something too difficult, you could end up setting off the same alarms you were trying to deactivate. In DX:HR, hacking takes on a new twist – that of a mini-game that is well worth your time to learn and master.

Since we’re in the future, of course all doors are passcoded instead of having key locks. This means nearly every door can be hacked, along with most computers and all security stations and alarms.

Successful hacking not only nets you access to more information and more places (to find more things), but it also increases your experience by a minimum of 25 per hack (usually 50 or 75 – base XP is 25 x Security Level), and offers bonuses in the form of even more XP, money, or “software” items that make future hacking easier if you are particularly good.

All of the bonuses turn hacking one of the most useful augs in the game, and likely one of the first to get upgraded to a high capacity. In fact, it’s easy in the first level or two to earn a whole Praxis point on nothing but hacking – making it a mod that pays for itself. 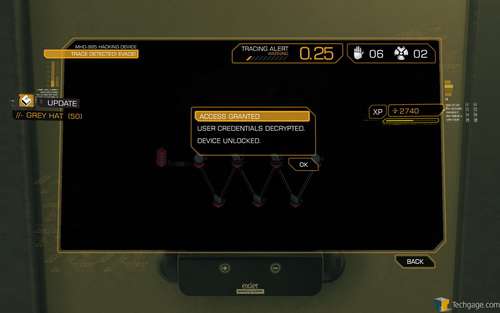 Hacking can do a lot more than just get you into places, though – it can allow the turning on and off of security cameras, remote turrets, and robots in the area. If you’re particularly nasty, these last two can even be dominated – turning it onto your side and killing any enemy foolish enough to be in sight. Turret and Robot domination are each one more Praxis point – but if your style is sneaky with a bit of twisted justice, they’re two more points well-spent. After all, nice people wouldn’t put giant automated turrets and hulking, murderous robots in the way!

I’ll confess – I’m not a fan of these. Even though I’m incredibly impressed with how beautifully they weave them into the story (and they do a GREAT job of that), the boss battles take something away from the game to me while adding something totally different. Don’t get me wrong – what they bring to the table includes a tremendous feeling of satisfaction when you bring down a huge enemy, who was tightly tied to the story.

This feeling of satisfaction is sadly mixed with a feeling of being a little jilted at being forced into the predicament, however. Even though boss battles don’t count as kills for those of us who play for “no kills” on Steam’s achievements, it takes a bit away from the game (in my opinion) to be forced to participate in a battle that is essentially you vs. something altogether huge. When your augmentations are based around covert ops, for example, they just feel tremendously unfair. 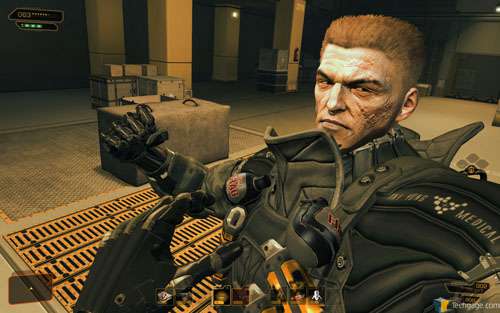 That being said, the game does a LOT to even the score in the form of carefully constructed environments. I have found everything I needed to win the battles present in the room (Thanks, Rob!). The environment variable is wonderful and if the battles didn’t start off so immediately in-the-line-of-fire, I’d have time to calculate a great battle plan.

These additions make the game feel more “open”, though I don’t feel like they contribute as much as the battles themselves can take away. As the boys over at Penny Arcade noted last week, “We arrived at the point we discussed in panel one only to learn that there was an entirely other game included with our purchase, a mid-range shooter, and we had to learn and play this game in order to resume playing the other one we liked so much.”

It’s amazing that this “second game” exists so tightly within the universe that DX:HR puts forth, enough so that fans of the whole FPS genre will likely embrace this change as a wonderful move for the franchise. I wish that I could feel similarly, and perhaps with some slightly different options for the battles, I could come away with that same enjoyment. With such a well-written story, the boss battles DO give a sense of scale and of satisfaction at the true completion of an objective… but the real world doesn’t have “bosses”, and their existence still detracts from the overall realism.

I had to take a minute to put in some words about the game’s bonus (downloadeable) content, the Explosive Pack and the Tactical Pack. I got the opportunity to try both out, and I have to say that both add some wonderful extra content to the game. However, since most of you only get the opportunity for one or the other, I figured I’d save you a little headache on deciding which one.

Of the two options, the Explosive Pack is by far the better choice. It gives you the remote detonated explosive and the Automatic Unlocking Device (AUD) – which is nearly a game-breaker in usefulness, getting you in and out of places that you shouldn’t have the ability to go to just yet (unless you spent every Praxis point on hacking). It also gives you a bonus mission, which grants you the Grenade Launcher at the end of it – which may or may not be to your tastes. 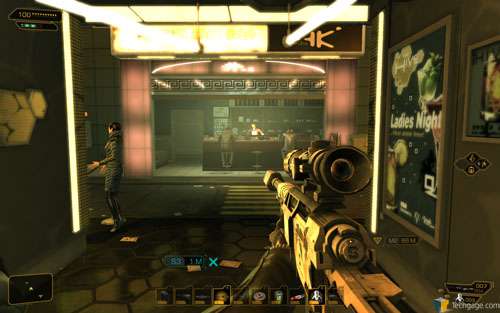 The Tactical pack is a nice addition, but it hardly feels worth it comparatively. It gives you some choice weapons that you can’t really get elsewhere in the game – a Doom-like double-barrel shotgun which takes up very little inventory space and a silenced sniper rifle that you cannot build in-game (as the sniper rifle does not accept a silencer). It also gives you a bonus 10,000 credits (currency), which purchases your first couple Praxis kits.

It will be nice when the game offers both packages for North American gamers, but for now it seems to be that you have no option but to choose one or the other. Given that, I’d stick with the Explosive pack and pick up the Tactical pack when it became available. Credits are freely available and though 10k of them is an instant two upgrades, the upgrades are still obtainable by normal means and the guns aren’t quite special enough to really demand your attention. However, a mission generates XP and the AUDs open up whole game areas if you don’t devote yourself to hacking, making a much more interesting play-through.