Though it feels like I’m barely scratching the surface of the game (and believe me, I am), writing much more would simply require explaining more that the game’s incredible story should be telling you. True to the original, it’s well-written and its methods for imposing limitations on where you go in such huge areas feel natural.

Even more true to the original, you simply can’t get everywhere in one playthrough – there are areas that require one type of augmentation, when you’ll likely have invested in another. All you can do is make a mental note to revisit them with a different loadout, and move on.

When even the experience point system doesn’t feel like a tacked-on mechanic, you can tell there has been a lot of thought put into the story. No, it’s not as perfect as the original, which had no experience whatsoever – solely augmentation kits, forcing you to “level up” without even knowing that’s what you were doing.

But the system allows you the recognition and reward for going places not expected, or doing things in ways the game didn’t expect many to take (things like the “Silver Tongue” and “Ghost” bonuses come to mind, which reward you for getting out of tricky situations without fights or alarms) – which is nice, because ammo and other toys aren’t all that useful in a game that consumes precious inventory space with bullet boxes and only lets you sensibly carry a couple types of weapons at once. 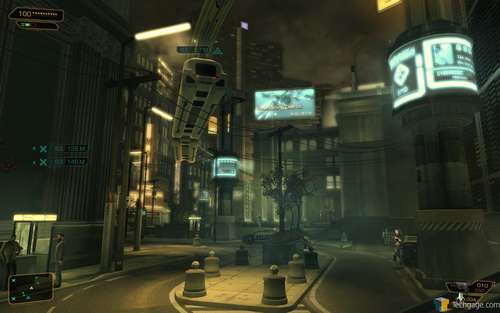 The boss battles detract a bit from the experience, but even they are so intricately woven into the story that they feel “good” even if they feel out of place. The whole system feels tightly knitted into a beautiful narrative that, though it doesn’t cover the same “scope” as the original, covers what it does beautifully and with detail. Corporate intrigue, political backstabbing, and even the ethics of what it means to be human are brought in without feeling fake or forced. You never feel like you’re “trying to save the world” – and for what you accomplish, that’s amazing.

This is the only time in the review I’ll even bother to mention the graphics, by the way, and that’s simply because they don’t really require more than screenshots. Any words I say in this review will not give justice to the beauty of the game’s environments – and that’s not any unearned praise. Light bloom, smoke, fire, lens flares – it’s a hodgepodge of effects, all used well. Play it on a mid-range system or better, and remember to pick up your tongue – there’s not a lot that looks THIS good. 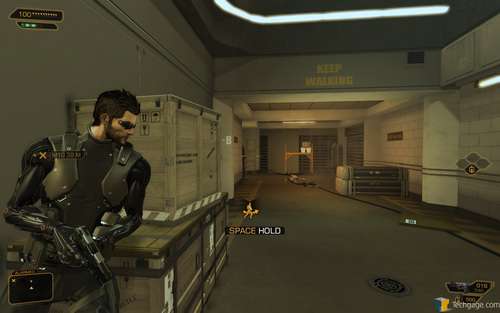 All in all, it’s hard to not practically squeal with glee that this game turned out to be as good as it is. After Deus Ex: Invisible War, fans of the series were tremendously let down – both by the crappy graphics that were made for the original Xbox, and by the poorly written story and gameplay. It felt like a traitor to the franchise, and many of us hoped there would not be another game to spit on the legacy of the original Deus Ex. To say that the team at Eidos Montreal redeemed Warren Spector’s magnum opus is an understatement.

Whether you’re a fan of the series or a fan of games in general, you couldn’t do yourself much more of a favor than to pick this game up and play it for all it’s worth. There aren’t a lot of single-player releases that come out like this (Bioshock is about all, in recent history) – lean, mean, story-driven games that grab hold of you and don’t let go. And with all of the replay value involved, it’s simply some of the best money you’ll spend on video games.