When AMD acquired ATi late last year, the industry was left with a few questions. One of those uncertainties was the future of the then unreleased ATi RD600 chipset for Intel’s monster CPU Core 2 Duo lineup. With ATi being purchased by Intel’s main competitor, no one really expected the ATi (AMD) chipset see the light of day.

To date, there has only been one company to build a board around this chipset and with RD600 touted as a gamer’s chipset, it’s no surprise that DFI picked the chipset up and carried it to market. Before its unfortunate demise, we had a working relationship with All American Computers in Terre Haute, Indiana. It was there that we got our first look at the early samples of the RD600. Back then, it was on an engineering motherboard but it did get us excited for the time it was released for consumers.

With their LANParty UT ICFX3200-T2R/G, DFI is the only motherboard manufacturer that builds boards using this chipset and quite possibly, will remain the only one. Boasting the capability of overclocking the memory and CPU buses asynchronous, the RD600 chipset seems like it was destined for DFI to produce.

It will be interesting to see how the UT ICFX3200-T2R/G performs as ATi doesn’t exactly have a pearly reputation as an enthusiast chipset manufacturer. To put it another way, how will the bastard child of ATi and Intel perform when put up against other enthusiast chipsets readily available now? Throughout the review, as in our past reviews of motherboards, we will be comparing performance numbers between this board and others of similar capabilities.

At the end of the day, we should have an idea of how well the UT ICFX3200-T2R/G stacks up against the competition, as well as see if the RD600 chipset has lived up to the hype that many of us (me included) are guilty of.

Mentioned earlier, the RD600 chipset was designed by ATi for Intel Core 2 Duo CPUs. With AMD purchasing ATi last October, this put ATi in an interesting position. Ultimately the chipset made its way through the channels and by way of DFI’s engineers, wound up on our bench. First up though, lets take a look at the chipset itself and see what it brings to the table. 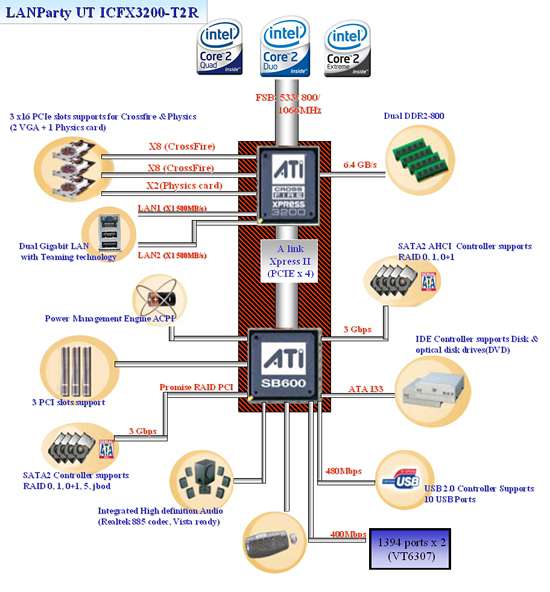 Of the many features that the DFI UT ICFX3200-T2R/G offers, the most notables are the support for all Core 2 CPUs, independent FSB and memory overclocking capabilities, 1066MHz FSB and 1066MHz DDR2 support and not two, but three x16 PCI-E slots. This is ATi’s answer to Ageia’s PhysX card. A pair of GPUs can be run in CrossFire (x8, x8) while the third slot can by used for physics with a smaller, less powerful ATi GPU. Using the SB600 Southbridge, the UT ICFX3200-T2R/G also provides 3 PCI slots, RAID support and high definition audio thanks to the Realtek ALC885 chip on the Karajan audio module.