Page 2 – Packaging and Board Layout

In typical DFI fashion, the box is bright and covered with not only information about the ICFX3200 but also a pair of gamers who appear to be straight out of a Gorillaz music video. 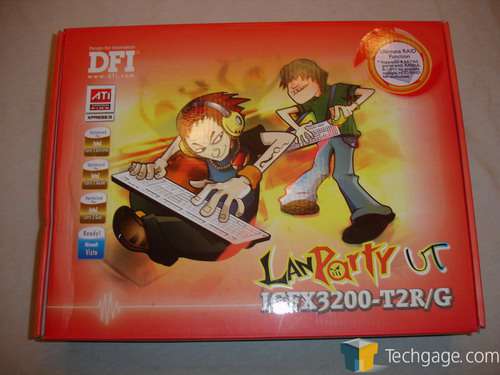 The board, as stated in the upper right hand corner supports a variety of RAID configurations made possible by not only the SB600 southbridge, but also by a separate, dedicated Promise chip, providing another 4 SATA II ports and bringing with it, RAID 5 capabilities. 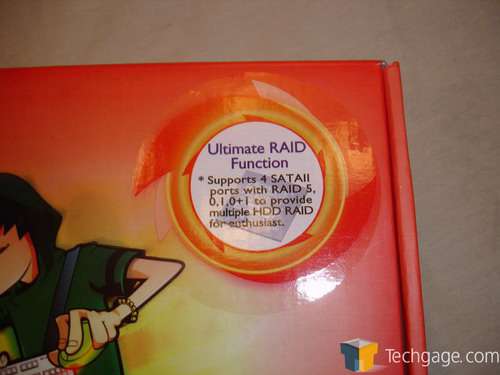 Bundled with the ICFX3200, DFI has included all the require cables, driver disks, There is an I/O plate, a small sticker, SATA to Molex adapters and the manual. While DFI clearly didn’t go to far out of their way to provide a memorable bundle, it is solid and contains everything that one would need to get started.

Moving onto the board, as usual, the layout and design of the ICFX3200 is what we have come to expect from companies like DFI. Aside from the horrible layout of the Infinity 975X/G, the DFI boards that we have worked with have all been top notch in the design area. Using an all black PCB, the ICFX3200 looks incredible and in typical DFI fashion, everything on the board glows. With UV reactive orange and yellow plastic, the ICFX3200 is sure to stand out in any windowed case. 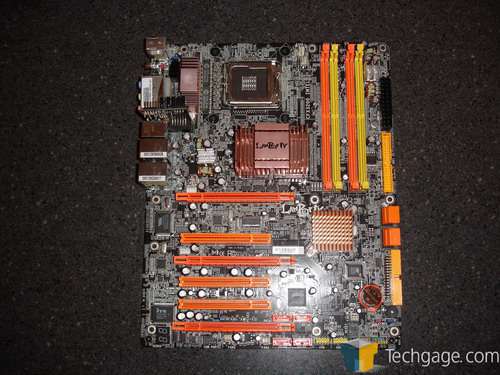 As we talked about earlier, the RD600 chipset gives us the opportunity to use three PCI-E x16 cards at once. Placed in between the x16 slots are three PCI 2.2 slots for those of you who with a discrete sound, NIC, or PhysX card. We also see a small LCD readout at the bottom left of the board. This can be used to diagnose any errors that might occur during the boot sequence. 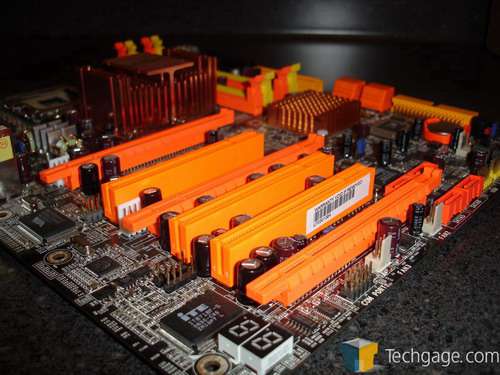 Just to the right of the CPU area, we have the memory slots. With 4 DIMMs and each set of slots color coded for the dual channel crowd, the ICFX3200 can support up to 8GBs of system DDR2 memory. 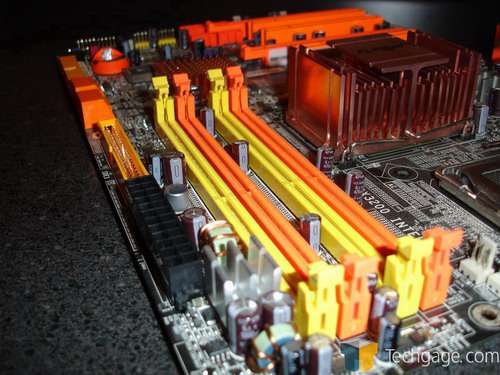 In the lower right hand corner of the board, we find the BIOS chip and battery, the USB headers, the copper Southbridge heatsink, and the enthusiast and benchmarker’s best friends, the power and reset buttons. We can also see the four SATA II ports that the Promise RAID chip provides. With these four ports, the total number of drives supported is a staggering 8. 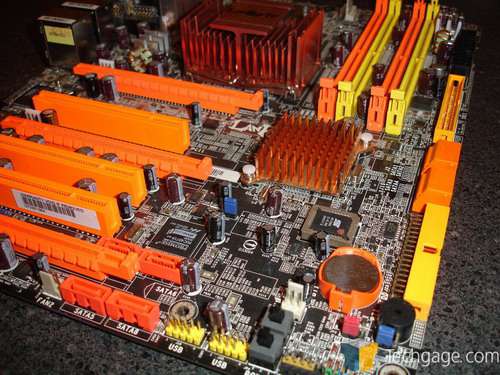 As we just mentioned, the Southbridge is kept cool with the help of a copper heatsink. Held on with a pair of spring mounted push pins, the heatsink not only looks good but should provide adequate cooling for the Southbridge. 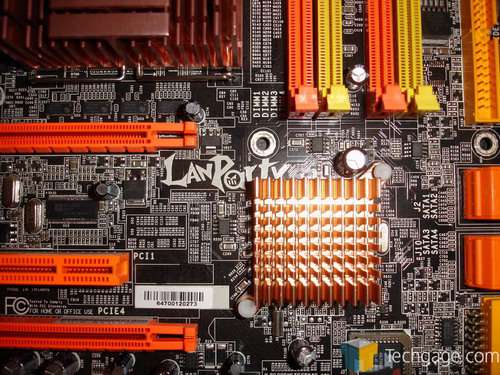 Out of everything, the most dominating feature of the board itself if the large copper heatsink intended to keep the RD600 chipset cool. While the heatsink does provide a good amount of surface area for heat dissipation, the flat horizontal piece on top might not have been the best of ideas in this editor’s opinion.

With reports all over the internet about the heat that the RD600 chipset produces, airflow will be impeded with this flat piece sitting on top. The other point of contention that I have with this heatsink is the way that DFI went about attaching it to the motherboard. Using hooks instead of the usual holes and pins, mounting an after market heatsink on the chipset is almost impossible.

One way around this is through Danger Den. They manufacture a water block that can be mounted using the hook method that DFI has used. While this is ideal for those who are using water to chill the chipset, this offers absolutely nothing for those sticking with conventional air cooling. 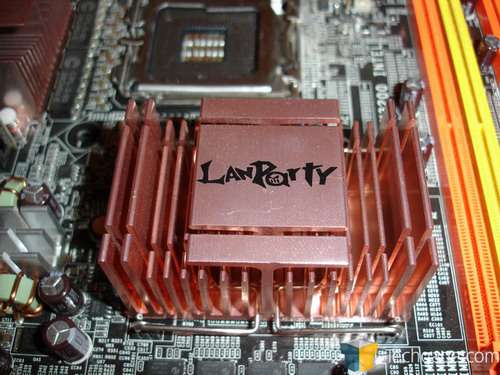 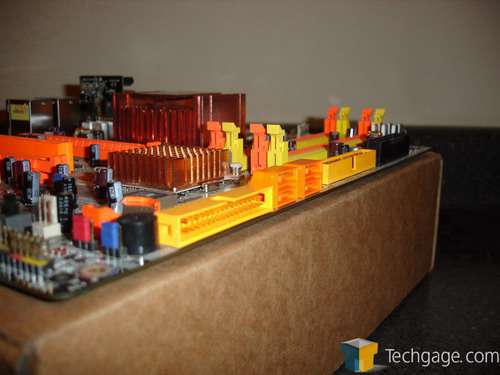 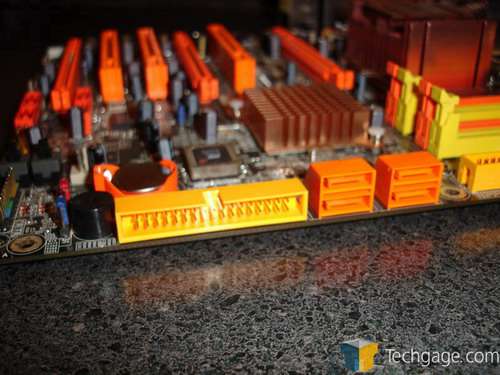 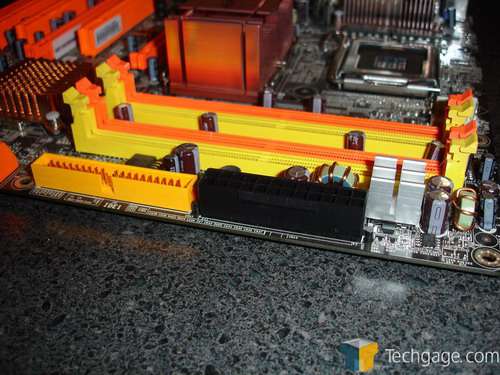 One of the many things that set DFI apart from the competition is their Karajan audio module. Providing high definition 8 channel audio, the Karajan uses the Realtek ALC885 CODEC which makes the ICFX3200 ideal for users that are considering HD-DVD or BluRay as the CODEC supports content protection. Also included on the back of the I/O panel are the standard PS2 ports for a keyboard and mouse, a whopping total of 6 USB 2.0 ports, a firewire port, SPDIF jacks and a pair of gigabit LAN NICs. 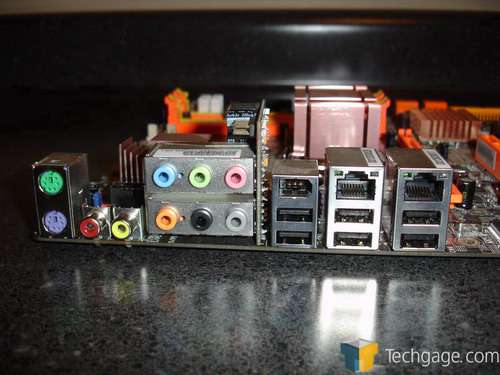 Near the bottom of the board, directly above the bottom PCI-E x16 slot is the Promise RAID PDC40719 chip. This not only adds 4 more SATA II ports to the board, but also gives the user the ability to run RAID 5, adding to the versatility of the ICFX3200. 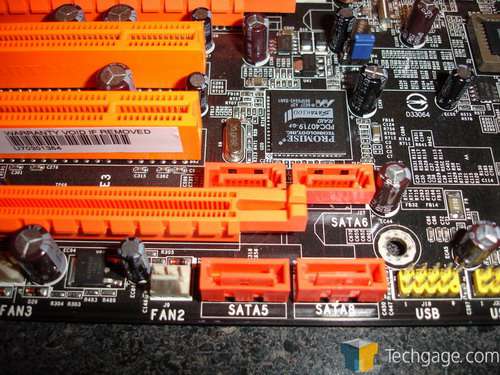 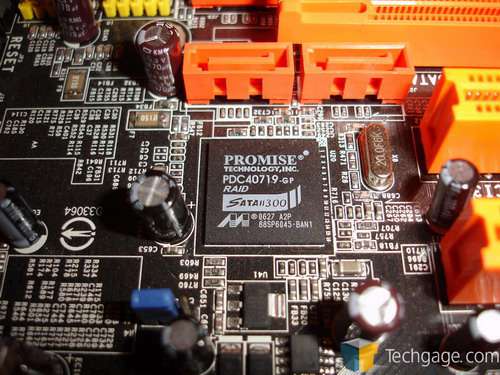 Taking a closer look at the power and reset switches, when pressed at the same time, this is supposed to clear the CMOS. This is convenient for those of us who do not use the board in a case but for those who do use this board in a PC chassis, this process can be done by holding down the power and reset buttons on their case. This is a very simply idea but one that saves a ton of time when overclocking harder than normal. 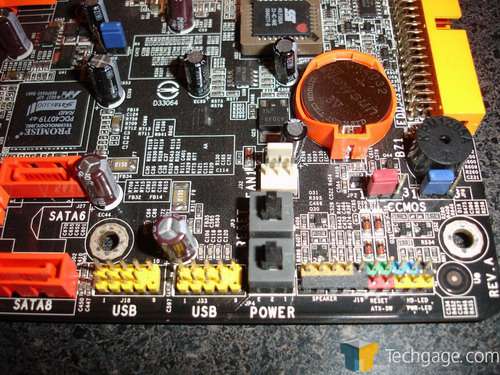 Looking around the board, we see the voltage regulators at the top of the board. The 6 phase digital power regulators that DFI uses on all of their LANParty boards keep the area around the CPU far more open than it would be if capacitors were still being used. To keep the 6 phase management MOSFETs cooler, DFI has used a heatsink not unlike the one used on the northbridge. While we don’t care for the design of the heatsink, at least this one will be directly in the path of most air coolers. 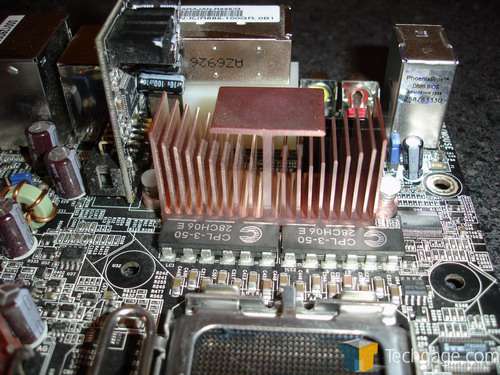 Located just behind the power module heatsink is the auxiliary 8 pin power connector. While not ideal, in PC cases where the power supply is at the top, this should not be a problem and in fact, will help keep the bulky power cables out of the way. 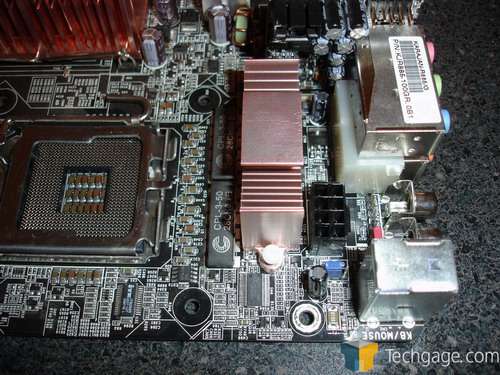 While we are looking at power connectors, there is an interesting set just above the top 2 PCI-E x16 slots. These are the only two slots suitable for graphics cards and it just so happens that there are 4 pin floppy power connectors to help provide power to the GPUs. 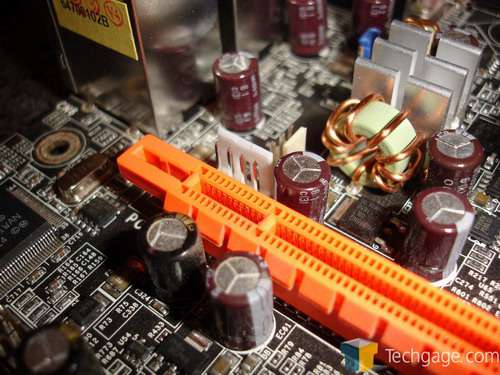 Finally, we examine the area surrounding the CPU. In our Commando review, we were amazed by the open space around the socket and the DFI ICFX3200 is no different. Due in no small part to the digital voltage regulators and the solid caps, the area around the CPU is open enough to allow the installation of even the largest of air coolers. 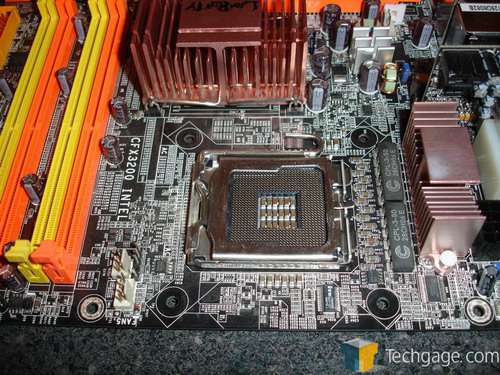 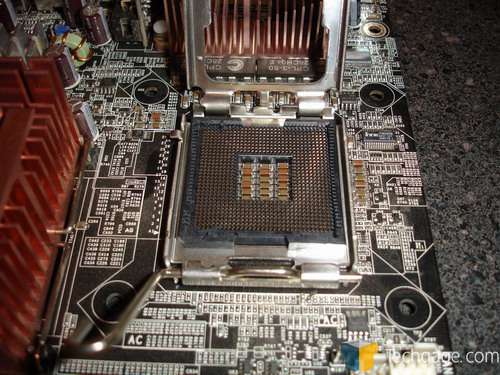 Prepare to be overwhelmed. Next up, the BIOS.