by Rob Williams on July 4, 2005 in Motherboards

DFI knows that hardcore gamers are interested in a motherboard with huge overclockability and modding potential. We are taking a look at the UT Ultra-D NF4, which promises just that.

In addition to the slots, we have (1) 1x PCI-E and a (1) 4x PCI-E. None of these have any use yet, to my knowledge, but will play some roles in the future. Two classic PCI slots are also included, for your sound card or any other PCI based hardware. PCI isn’t likely to die off for awhile, as even high end products still thrive on it. Even the AGEIA PhysX future add-in card will be PCI based. 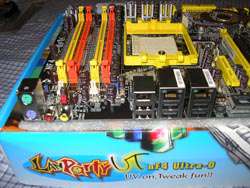 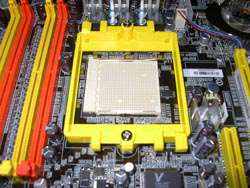 The first picture on this page shows the board without the add-on sound card. The Ultra-D comes complete with (6) USB 2.0 ports and a IEEE 1394 firewire. The board supports an addition of more USB and Firewire ports as well, in case you have a case that has front ports you want to use. For PS/2 Keyboard and mouse users, the ports are there for you.

There are a total of (5) 3-Pin Fan connectors, although ones being used already by the chipset fan. They are placed quite nicely, so installing fans shouldn’t be difficult. Near the CPU Socket there is one that’s meant for your CPU fan of course, and above that, you could mount a fan above your memory and use that connector right beside it. The other two are at the bottom of the board, easily allowing you to hook up fans for your harddrives or for anything else. 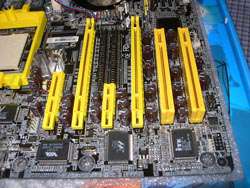 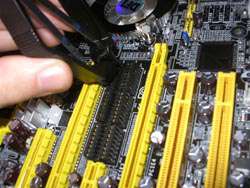 You may have also noticed the variety of power connections around the board. For this board, there is a master 24-Pin power connector. You do not need a 24-Pin PSU, but it’s recommended. You could either use a 20-Pin to 24-Pin adapter, or just plug in your 20-Pin as is, leaving the top four empty. However, if you have the cash for a solid 24-Pin, I’d recommend you get one for complete stability.

Directly beside that though, is the 4-Pin power connector, which most motherboards now have. In addition to these two though, there is also a small 4-pin connector and a larger 4-pin molex connector. For the small one, you can easily use the floppy connecter off your PSU.. it’s the same. Once you have everything in your system installed, you should have a spare molex connector that you can plug in. The motherboard will run without these two extras, but DFI recommends them for stability and performance. 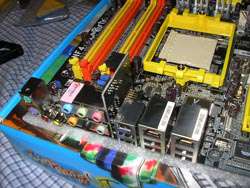 That about covers it for the layout. In the end, I have no serious problems at all. If anything, I would have liked to see the CMOS reset pins to be positioned nearer the bottom of the board near the BIOS chip. Resetting the CMOS was troublesome where it’s positioned now, but if you have a mid-sized case or larger, you may be better off.