by Rob Williams on July 4, 2005 in Motherboards

DFI knows that hardcore gamers are interested in a motherboard with huge overclockability and modding potential. We are taking a look at the UT Ultra-D NF4, which promises just that.

Even though I have used a fair amount of DFI boards in the past, the Ultra-D is the first one that I have personally owned. I was a previous MSI die-hard, but seeing all the buzz about this board made me want one. I’ve been using the board for over a month now, and overall.. I love it.

I have definitely had my share of issues with the board as well though. The Ultra-D is known as a fussy board when it comes to memory, and I have found that to be absolutely true. I have tried three different sets of memory in the board over the month, and it’s been somewhat fussy with each set. The original set was a standard value ram, Samsung DDR400. This would cause the entire computer to spontaniously reboot. It wouldn’t matter what you were doing, but the problem was heightened when playing games.

The other two sets of memory have both been Crucial Ballistix PC3200 and PC4000, both 2 * 512MB. As mentioned in our PC3200 review, the memory would return an error free MemTest only if we used a lower than specific voltage. So, instead of using the recommended 2.8v, we stuck with 2.6 at stock timings.

With the current set, PC4000, MemTest will still return errors, even at stock speeds.. even with lowered Voltages. Since I have had issues with both sets of Ballistix, I don’t believe that it’s a memory issue, but rather a board glitch. I have used both versions, 2 and 3 of oskar wu’s BIOS, neither of which rid the errors. Since Ballistix memory doesn’t really fit into either of those BIOS catagories, that could be why. Crucial has told me that they have had zero issues with the Ballsitix and Ultra-D in their labs.. so it’s odd that I am. In the future though, I may be surprised, if it’s due to a PSU issue (Ultra X-Finity 600W). So at this time, I can’t totally blame it on the motherboard. 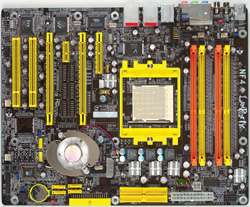 Other minor issues have been defunked BIOS flashes. Flashing, and a reboot would sometimes cause a black screen on boot. The only way to combat this, was to clear the CMOS, which fixed everything. This problem shouldn’t really happen, as the BIOS is reset prior to flashing. I have had this problem with not just the Oskar Wu BIOS’, but the official as well. The only last gripe I have, is the placement of the CMOS pins. Depending again on how large your case is.. I found it to be a huge pain in the ass to clear it. I had to always disconnect my harddrives in order to reach it. As mentioned earlier, I would have highly prefer this to be placed around the BIOS chip, or close to it, as nothing is usually in the way there. Of course, placing it down there may have not been technically possible on this board.

Even with these problems though, I still love the Ultra-D. The tweaking capabilities are endless, and performance is awesome, the layout is great and the board just looks attractve. With all the features packed into it, if you are an enthusiast or hardcore gamer, this is a definite recommended board. I can’t discredit the board because of issues I have had, especially memory related, because I have been completely unable to find anyone else with the problem, meaning it’s likely just me.

For those of you out there who are interested in an Ultra-D, but don’t want to give up your high end AGP card, an AGP version of the board was released a few weeks ago. If you are building a system from scratch though, there would be no real reason to get an AGP based Ultra-D.

This is the first motherboard review we’ve had on Techgage, so if you have any questions/comments about it, please feel free to shoot me an e-mail at rob [dot] williams [at] techgage [dot] com. In the future, as more boards are reviewed, the reviews will be more refined and in-depth. Of course, any general comments or flames about the review can also be left in our related forum thread.