In our first part, we take a look at Polk Audio’s new I-Sonic ES 2, R2-D2 projector and webcam, Dell’s latest XPS notebooks with AGEIA’s PhysX physics processor and Xyber’s high-end and totally silent HTPC. There are also a slew of various photos from around the show-floor, including triple Alyx Vance’s!

Dell had their brand-new XPS M1730 gaming notebook on display, which happens to be the first available to incorporate AGEIA’s mobile PhysX processor and also Logitech’s GamePanel LCD. We’ve published many AGEIA-related articles in the past, but for those unaware, they offer an SDK to developers that allow for advanced physics in games. Few games are on the market right now that support the technology, GRAW 2 being the most notable right now and a copy is included with each unit. 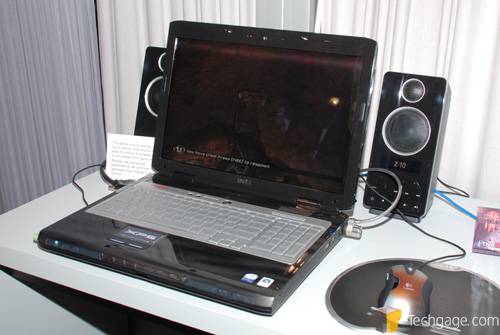 UT3 that I was playing crashed before I was able to test out Logitech’s GamePanel LCD, but it essentially allows you to view game stats and create macros without leaving the game. One thing I do have to say, is that the latest XPS is one of the best-looking notebooks I’ve ever seen. It’s well designed, solid and has a great screen. If you want the top-end offering, you can add a Blu-ray drive, SLI 8700M GT’s, and an Extreme Edition processor that can be overclocked to 3.2GHz. Pricing begins at $2,999 for a 2.4GHz processor, 200GB hard-drive, 2GB of ram and SLI 8700M GT’s.

At a press event, Polk Audio unveiled their new I-Sonic Entertainment System 2 which introduces the iTunes “Tag” feature. First and foremost, the I-Sonic ES 2 is an iPod dock that offers both ease of use and excellent sound quality. Within the uniquely-shaped dock are four drivers to offer a full stereo sound (two in front, two in back), although total power was not mentioned. It’s claimed to be “audiophile quality”, however. What makes the system very unique is the Tagging feature that works with iTunes. Paired up with HD Radio, if you hear a song playing that you like and want to purchase on iTunes later, you can “tag” it by pushing the Tag button in front of the machine or on the remote. Next time you sync your iPod with iTunes, it will show you a list of all the songs you’ve tagged and ask you which ones you want to purchase/download. Thanks to an exclusive deal with Apple and iBiquity, the tagging feature is unique with Polk Audio for the next few months. The I-Sonic ES 2 will be released within two weeks and will retail for $499.

If you have an HTPC, chances are good that it’s close to your TV. The problem with this is, you may hear it during normal use, taking away the mood of the TV show, music or movie. Xyber Technologies is a new player in the game who vows to offer superb PCs that are dead silent. The model we looked at in particular was the MKIII-HTS, which features a large aluminum chassis. As is standard throughout most of Xyber’s models, each side of the chassis are equipped with huge fins for efficient heat-dissipation. 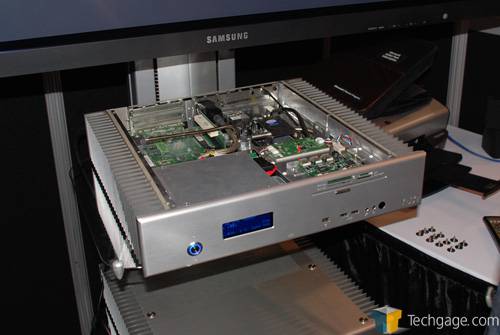 Taking a look inside, you can see that there are absolutely no fans. If a component needs cooling, it’s equipped with a heatpipe which leads to the fins. This results in a dead-silent machine. No moving parts means no noise. The hard-drive is encased in a separate box, so the sound from that is dampened to the point of being completely silent as well. The MKIII-HTS doesn’t come cheap, at $7,593.16 which comes with everything you need to get started, from a keyboard, mouse, speakers, software… oh, and a 42″ Samsung Plasma TV.

Huge Star Wars geek? Then you will love what Nikko had on display. First up was an R2-D2 webcam. Yes, seriously. If that’s not enough, it comes paired with a Skype phone in the form of a lightsaber. The product is much more than a gimmick though. It’s a fully-functional webcam that can be accessed from anywhere… so that you can keep tabs on what’s going on in your bedroom. 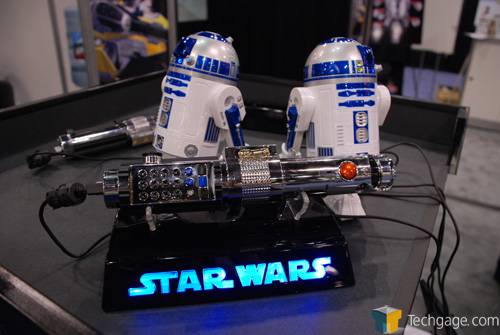 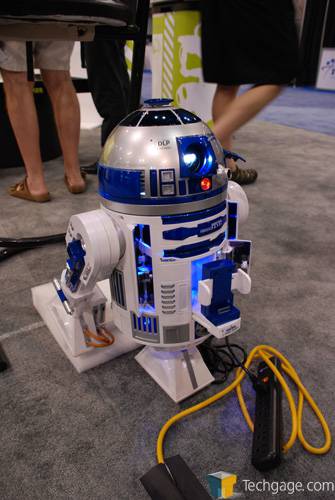 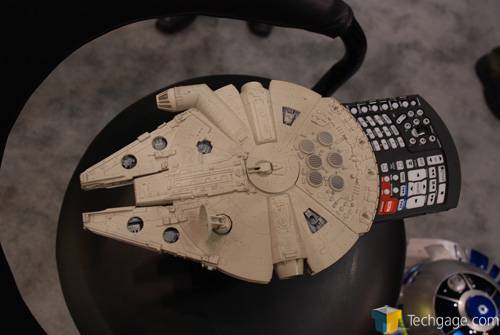 If you need more R2-D2 love, then the digital projector might be for you. This is a large unit that sits in front of a wall and can project an image up to 200″ wide. It does more than just accept CD’s and DVD’s. It can also handle memory cards, USB thumb drives and even your iPod. If a huge R2-D2 in your livingroom wasn’t enough, how about the Millennium Falcon remote control?

Due to a horrible internet connection at the hotel we are staying at, this first part was shorter than we had hoped (due to slow loading pages to acquire more information that we needed). So to finish things off for this part, you can head to the next page to see a slew of pictures of spots around the show that we managed to upload in a different area. Part 2 will come soon.