Following in the audio theme, UK-based Meridian was showing off their high-end result of a collaboration with Ferrari, the F80. Style is one word that immediately comes to mind, and also… wow. Once again, it’s hard to tell how great a speaker sounds in the middle of a large crowd, but I loved what I did hear. Three drivers are implemented for 80W total power. 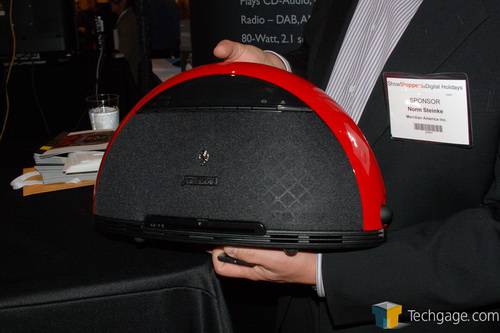 It’s a solid product as well… quite mobile but heavy at the same time. It’s not a product you would want to move around that often… it was FAR heavier than it looks. The price tag is not for the faint of heart: $3,000.

Lastly on the audio front, Shure was promoting their $99 earbuds, the SE110’s. These are designed to be for the budget-concious consumer, though I was mildly impressed with how they sounded. Bass is something that lacks in many earbuds, and the SE110’s are no different. What was impressive was that while wearing them, the background noise almost completely disappeared. Great for an airplane, I’m sure.

Oct 15 Addendum: The Shure earbuds pictured below are the SE420s, not the SE110s mentioned above. 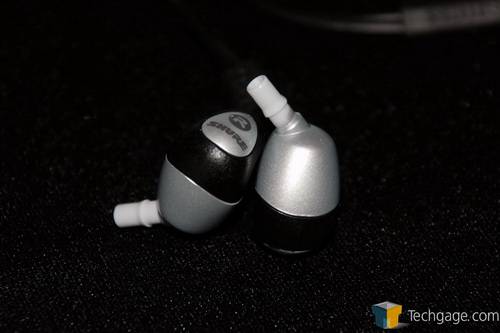 Being close to the holiday season, it wasn’t much of a surprise to see a slew of child-oriented products on hand as well. Some, even I wanted to play with. As sad as that may be. Nickelodeon displayed numerous products that are designed to intrigue kids and handle a little bit of a beating. Spongebob was the primary figure portrayed throughout most of the offerings, including a cool alarm clock that pops Spongebob up at the alarm time, and can be pushed back down to act as a Snooze.

Many cameras were on display as well, and since these products are designed for kids, the price ranges are kept reasonable. The solid-looking gray digital camera in the middle offering 3.0 megapixel resolution and should retail for around $70.

Zipit was also on the floor showing off their latest product, which is an all-in-one solution for kids who want to IM on the go. The product is developed for both parents and child however. Parents will have access to what kind of language can be passed through and also block other features they don’t want their kids to use. 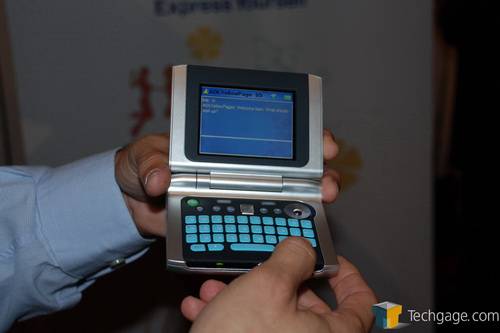 Priced at $150, the unit would essentially replace a cell-phone for most kids (though having a cell phone is a smart idea for obvious reasons). Studies done by the company showed that 90% of kids are online and ~75% were on instant messengers. The Zipit allows them to keep in touch with friends while on the go and offers up to six hours of battery life on a single charge. Another notable feature is that the device can be put into an idle mode when not in use, but is still able to receive messages while in that mode. The user will just recognize the fact that they have received an IM and can deal with it accordingly.

Lastly, one of the coolest kids products was produced by Jakks Pacific. Called the Eye Clops, the product consists of a huge ball and a handle. The idea is to run along the bottom of the ball on any surface and what’s seen at 200x zoom will be displayed on your TV. This… was amazing, and something that anyone I know would have some fun with. The demonstrator showed examples of carpet, money and even skin. Rolling over her sweater, you could see the individual fibers on the screen.. quite impressive. 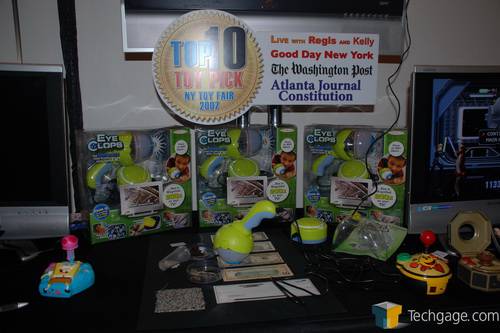 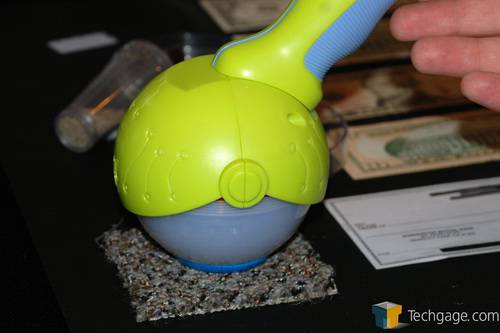 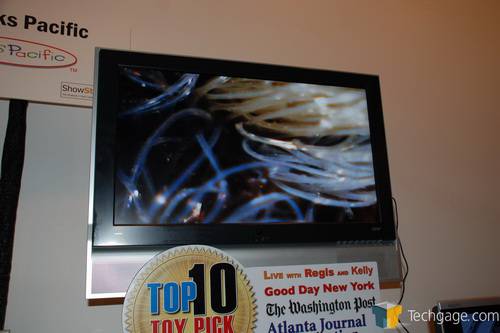 While walking around the show, I overheard a distinctive and enthusiastic voice and knew it could only be Dick DeBartolo. I also learned that he takes great candid shots! 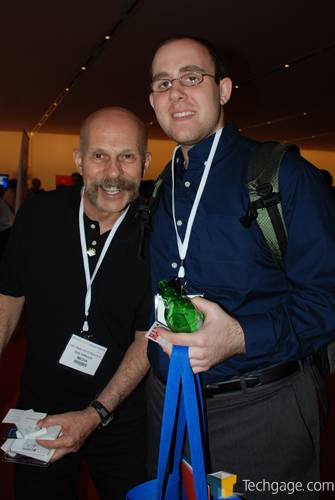 Showstoppers is over, but that doesn’t mean the action stops. Heck, it hasn’t even begun! Stay tuned to the site as we continue to update as the show progresses.