Because DisplayLink devices will be detected like any other graphics card, the built-in Windows display settings can be used to make any adjustments you may need. If you have identical monitors, nothing should have to be changed here, but if you have varying resolutions like I do, then it’s wise to drag around the monitors to your preference. I found having all of the displays align at the top makes the most sense, but your choice could vary. 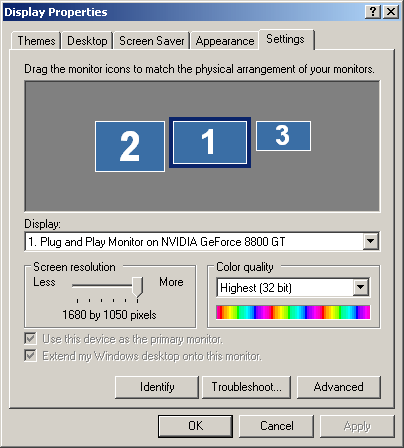 During use, the entire setup ran like a dream. There was no lag dragging one thing to another screen, video played well (720p) and overall, it was hard to tell this was all being done via USB.

I did have a cursor-lag problem with the largest display, the XHD3000 at 1600×1200, but I believe that to be a problem of the monitor itself, not the adapter. That monitor shows slight lag at lower resolutions even through a regular connection, and there are other issues that I plan to cover in that displays review in the coming weeks. I regret not having another display handy capable of 1600×1200, but there was no lag whatsoever on the television at 1280×768, so I believe it to be a stable setup overall.

DisplayLink does warn against full-screen gaming, however, as the graphics are too difficult to render using their current chipsets. According to the company, new chipsets are in the works that should be released later this year to allow gaming. Even then, Windows Vista will be required due to the OS having abilities to render the graphics on the systems graphic card instead of on the DisplayLink VPU.

For regular use however, you should never experience any slowdown, regardless of how much work you are doing at a time. The primary downside is gaming at this point, but as long as you keep that to the primary display, there should be no lingering issues. I should mention that lightweight 3D applications are usually fine, such as Google Earth.

Prior to CES earlier this month, I had no idea how USB-video worked or more importantly, how well it worked. Even after leaving, I had no desire to investigate further until I realized I had a media kit hanging around. After setting everything up, I transitioned from not caring to completely understanding what it was all about. Overall, DisplayLink offers an impressive technology, and one that I awarded our Best of CES 2008 award to.

We might still be in the early stages of DisplayLink’s products, but already the adapters feel like a matured product. I ran into no severe (or even moderate) complications during all my use. The prime hitch was the lag on the Gateway monitor, but I am still leaning towards pointing blame at the display rather than the adapter. 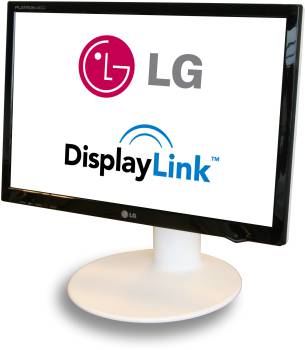 Besides regular desktop work, high-definition videos transmitted fine as well. I don’t have a Blu-ray or HD DVD player to test out 1080p content, but I tested downloaded 720p content and it ran fine. I believe as long as you are running non-full-screen applications, you shouldn’t feel the effects of lag with whatever you are doing, but I could be wrong where 1080p is concerned. I plan to test that out once able.

As of right now, there are not that many companies who produce DisplayLink products in the US, but the ones that do can be found here. Both eVGA and Kensington will soon be releasing very similar adapters to what I used during my own testing here, and you can expect them to retail for around $99.

It has hardly been two weeks since I first learned of DisplayLink, and already I am interested in seeing what else they have up their sleeve… namely, chipsets that support higher resolutions. Pricing might be high for some, at around $99 per adapter, but to overlook purchasing a second GPU and the ability to hook up to six monitors will wipe out concern over that. That said, I do hope that the technology catches on fast so that prices will go down, and as a result, become readily available for everyone.