Mario has appeared in so many games, but this one is special. In some ways, this game can be considered his ‘largest’ adventure yet. Even though Nintendo introduces many new elements to the series, they still manage to retain it’s classic feel.

Because this is a Mario game, the overall difficulty is nothing intense. This is actually one complaint I have, because some aspects of the game are very, very easy. For example, the bosses at the end of each tower and castle… most of them are incredibly easy to take down quickly. Specifically, in the towers if you have fire power, sometimes you don’t even need to -move- in order to kill mini Bowser. You can simply stand in place and rapid tap the Y button and have him dead before he reaches you. 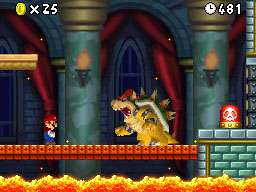 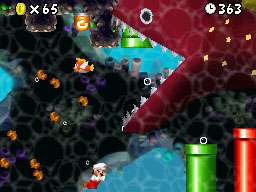 The castles at the end of each world have more difficult baddies, but they are still nothing that will take you more than twice to beat. Even the last battle in the game was rather quick… it took two lives and about 90 seconds. Though I wish the difficulty wasn’t so easy, it didn’t really detract from the game that much. It’s truly a game you can jump in and go.

In addition to normal gameplay, the game includes 16 mini-games that can be played solo or against three other DS owners. All of the games are incredibly simple, such as building a snowball before your friend, by rolling it down a hill quicker. Other mini-games include whack-a-mole, match the caterpillar and even one where you must blow into the DS to help Yoshi float. None of these are time consuming, but make for good muliplayer action or quick diversions.

Though this is a fantastic game, there are a few things that strike me odd. The first being, that if you play normally through the game, you will end up completing it by skipping world 4 and 7 completely. They have to be unlocked, but I found it weird to lay the game out in a misorder like that. You -can- complete those worlds in order, if you know how to unlock them. But most wouldn’t at that point.

I found that it was tedious to not have the ability to save whenever you wanted. Once you complete a tower, castle or something else you unlock, you can save. But, you first have to beat the game in order to save whenever you like. In the end, to save yourself any sort of stress, it would be easier to just beat the game first, before trying to collect all of the coins. 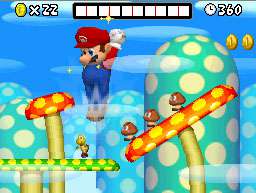 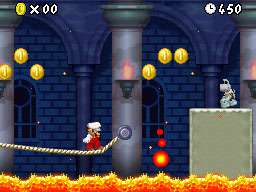 Lastly, this game didn’t seem to have many unlockables, or goals that you really need to accomplish. The primary ‘extra’ that you can unlock are wallpapers for the bottom screen during gameplay, but they cost 20 coins each. In the end, you can buy four different ones, for 80 coins total. This was far from exciting, and while they are cool looking, it’s a waste of time playing simply to unlock them.

In the end, does the game deliver on it’s promises? Yes! I have not had so much fun with a platformer in quite a while, and even though I beat the game in it’s entirely, I am still going through and replaying some levels. Overall, it’s a great experience and anyone who wants to experience what a classic 2D game is supposed to play like, this is the game to pick up. I am awarding New Super Mario Bros. a 91%.

Pros & Cons
+ Classic gameplay, lives up to original
+ New gameplay elements add to the experience
+ Superb graphics for the DS
+ Sound is very well done
+ Mini-games a plenty
– Very easy game overall
– Not much in the way of unlockables