Despite having been a huge DN3D fan since its release in 1996, it’s taken me this long to give the fan-made “HRP” (High Resolution Pack) a try. It takes the game’s classic graphics and gameplay elements and puts them in overdrive. The result? A cleaner, high-res game that feels more natural than the original.

When Duke Nukem took its 3D turn in 1996, there was little doubt that the game was going to be amazing. We’re talking about the developers of Bio Menace, Kroz, Cosmo’s, Crystal Caves, Rise of the Triad and Duke Nukem 1 and 2, after all. In the late 80s and early 90s, Apogee / 3DRealms released so many games that appealed to me, that I became a relative fanboy. I just knew that a 3D Duke Nukem would have to be amazing.

Well, suffice to say, even with my über-high expectations for the game, I was simply blown-away at the time of the game’s release. The fact that the game was quite mature for a 13-year-old sure helped, but Duke Nukem 3D offered a lot more than witty one-liners, hilarious faux movie posters and pixel nipples. Even to this day, DN3D brings a lot more to the table than most newer games do.

What is this mysterious ‘Duke Nukem 3D‘?

While this article aims to shed some more light on one of the coolest total-conversions for the game (if you can even call it that; it’s more like a “total upgrade”), I wanted to talk a bit about what makes it so enjoyable to begin with. Even with the HRP, we’re not seeing graphics on par with today’s games, but if you’ve never played the game before and have an open mind, there’s little doubt that you’ll have an absolute blast with it even today.

Gameplay of the first two levels in DN3D using the HRP.

In 1996, 3D first-person shooters were hit or miss, but even when compared to the best of the time, I’m sure many fans would agree that Duke Nukem 3D upped the ante. For starters, we had a hilarious character that we finally could hear (voiced by the iconic Jon St. John). Then there were the levels, which were cleverly designed and kept interesting thanks to the varying locations. The game starts out in a beaten-down Hollywood street, but we quickly move on into police departments, movie stages, space, subways, hotels, Asian town and so forth.

While DN3D featured a regular collection of weapons to slay enemies with, a couple of interesting ones were added in. There’s a shrink-ray, which allows you to shrink most enemies then stomp on them for an all-too-satisfying splat, a freeze gun that allows you to freeze enemies solid so that you can shatter them with your foot or gun, and of course, who doesn’t love the trip-mines and pipe-bombs? I’d be remiss to not mention the Devastator as well, a rapid-firing dual-action rocket-launcher. Enough said. 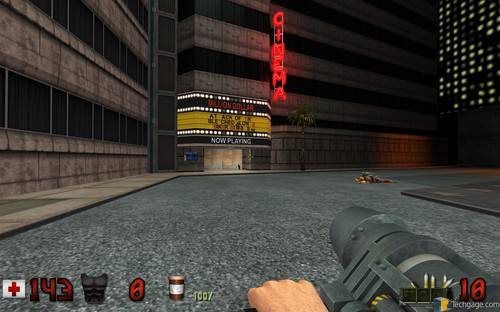 The music, audio and atmosphere – way too awesome. It perfectly sets the mood in each level, and in the darker ones, can really freak you out. Along the same times, monster noise was really well done, with the Octobrain noise being particularly nerve-wracking. The enemies found in the game were also quite unique, though all of them are Alien-related. One of the most fondly-remembered are the Pig Cops – self-explanatory by name alone.

I’ve saved the best thing to talk about for last. While the game itself (and especially with the 1.6 Atomic pack) offered many gameplay hours and a ton of fun, what really blew the doors wide open was the inclusion of a great map editor and other modding goodies. The game was so moddable, that many first and third-party total-conversions and level packs hit the market within the first year alone. EDuke32, a program that allowed you to run the game on a highly-tweaked game engine, was also released a mere year after the game’s original launch.

To say that modding was a success for Duke Nukem 3D would be a gross understatement. Although I beat the original game a few times after launch, I literally spent hundreds of hours in the years following the game’s release checking out all of the different mods, levels and TCs. If you’re a Duke 3D fan, you’ll never be bored. 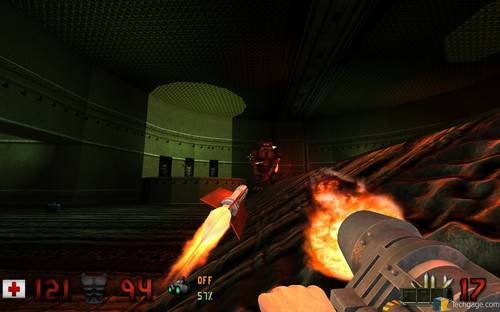 Some environments, like this one, show off added bump-mapping techniques.

At this point, the game is now 16-years-old, and where technology’s concerned, that might as well be considered a lifetime. Because of all the improvements we’ve seen in gaming since then, hopping into a vanilla DN3D can be a little frustrating. By default, WASD isn’t configured; instead, you need to use the arrow keys. 3DRealms was still playing by the rules of 2D gaming of the time, and while that’s fine, it just means it’s harder to adjust to today.

Where the oldness really becomes evident is when you compare DN3D, which was released in 1996, to a game like Half-Life, which was released in 1999. The latter game featured amazing 3D-rendered graphics and a much more fluid engine overall. After DN3D‘s launch, game engine progression really began to accelerate, so if someone was to compare DN3D using the HRP, I’d say it’s the equivalent to playing a “circa 2002” first-person shooter. It’s a major improvement given how fast things pushed forward around the turn of the century.

Your face, your ass, what’s the difference in high-res?

Despite the fact that I’ve played Duke Nukem 3D through many times since its launch, I for some reason took forever to take the High Resolution Pack for a spin. I knew of the graphical and engine enhancements, but I didn’t actually see a need for them. Well, I buckled down about a month ago and decided to take it for a spin, and I must say, I’m impressed. The textures are sharp, the lines clean, models just as I’d expect them to be in 3D, the lighting much improved – and if you look close enough, there are even traces of bump-mapping thrown in. 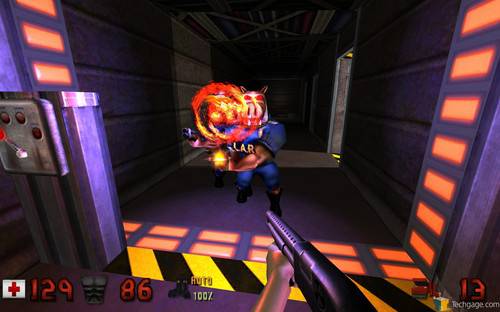 No time for boinking when there be an oinking.

The project has a lengthy history, and has seen the release of multiple “major” versions. At this point in time though, the HRP is so complete, that anything done from this point onward could be subtle. That’s not to say that the graphics wouldn’t see some upgrades in the future, though. If there’s just one area where things could improve, it’s with bump-mapping; it’s still non-existent in most of the game.  But compared to the original, what’s seen here is simply mind-blowing (as all of these screenshots can attest).

In order to make use of the HRP, you need to have a copy of the original game (GOG.com sells it cheap), and then download the latest version of the pack. I’d recommend extracting the entire archive to your desktop, opening the folder and subsequent “Duke3D” folder, and then copying the contents from there over to the root folder of your DN3D install.

Once you’re finished, you can launch EDuke32, double-check settings and then click Start. You should make sure that “Polymer” is enabled and “autoload” is selected as the folder. Once in game, you should head on into the video options and tweak things to your liking. 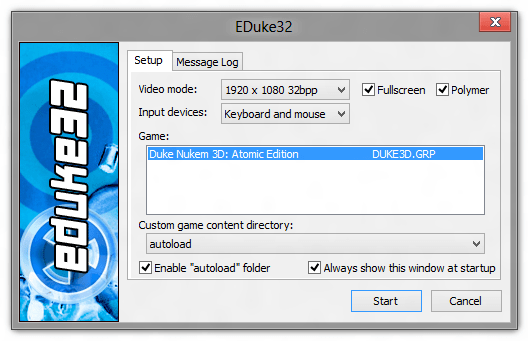 At this point you should be completely finished and ready to get your Duke on. If you’re still unsure whether or not the HRP is worth your time, check out all of the screenshots on the following page, and definitely check out the video I embedded above. If you don’t end up wanting to load up the HRP after that, you’ll at least be able to see me die in a truly embarrassing manner!

Huge kudos to the HRP development team for making this possible. It’s no small feat taking one of the best games (to me) ever released and then make it so much better.