After more than a decade, the king is back. Duke Nukem has been living the dream of being a worldwide icon since finishing off the Cycloid Emperor long ago – but the aliens have returned. Duke once again has to save both himself and the world by any means necessary. Does this adventure manage to live up to the last?

The number of references made to 3D in DNF are countless. You’ll meet a kid wearing a Duke Nukem 3D t-shirt for starters, and even explore through some of the same areas as the previous game, like Duke Burger. For me, some of the desert areas even felt familiar.

Topping it all off, a multiplayer level is included that mirrors the Hollywood level in the same game, though rather than us seeing a high-def version of the original, we instead see the result of the level suffering fifteen or so years of neglect (screenshot is on the next page).

DNF shares a lot of the same flavor as DN3D. Duke is still full of himself, and chicks remain a major focus. You’ll hear quips out of Duke often throughout the game, much moreso than the original. This for the most part is a downside, because you’ll hear him often repeat the same line, even when it doesn’t fit with the situation. One example would be when I took down a mini Octabrain with a shotgun, to which Duke said, “Right in the Jewels.” – a line meant for another specific event in the game. 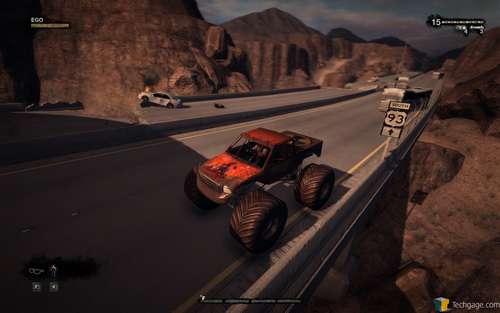 I’m not opposed to such things in video games, but Forever takes things to a level that shouldn’t exist for a game like this. The game kicks off with Duke getting his mini Duke taken care of by two girls, the “Holsom Twins” (get it?), and little did I know that was just the beginning. Any and every woman you’ll walk by will profess what she’d love to do to you, and you’ll never go long without seeing a breast.

To be fair, this is what Duke is all about, and DN3D was not much different. Things just seem to be taken to a much higher level here, which could be more noticeable due to the much-improved graphics. However, there are still some areas where sexual references or graphic images are forced in. There’s a boss, for example, that has three breasts, and throughout underground alien hives, you’ll see growths extruding from the wall that happen to be, you guessed it, three breasts. It just seems random, and too immature. Yes, I said that about a Duke Nukem game.

DN3D wasn’t void of risque subject matter or language, but again, DNF comes off as being a game that tries too hard to be cool. You’ll hear the “F” word at least one hundred times throughout the game – likely more – and quotes from Duke himself and others are sometimes cringe-worthy, and come off too forced. DN3D didn’t push the bar quite this far. I guess you could consider all of this an advantage if you’re looking to desensitize yourself to vulgarity. By the end of the game the swearing and sex references weren’t even apparent anymore.

“My job is to kick ass, not make small talk.”

Also controversial with Forever are the dialogue cutscenes and non-important gameplay elements. A few chapters in, Duke will find himself at a strip-joint, and the entire goal is to get required items to get a lapdance. Yes, it’s quite that ridiculous. I’ll be honest in saying that this kind of thing doesn’t bother me, as I sometimes appreciate the ‘break’ from hectic gameplay. I can wholly understand why people despise nonsense like this, but there’s a huge difference between a Call of Duty and a Duke Nukem game. This kind of thing isn’t exactly unexpected. Needless parts like these should have been made skippable, however. 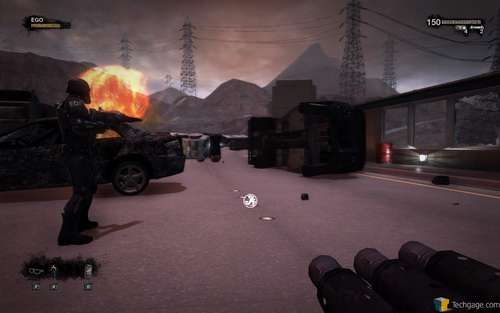 Another element that I enjoyed that others may not is being shrunk down to the size of a rat and made to complete some missions. There’s just something about seeing regular objects the size of houses that I like, but I’ll be the first to admit that most of the parts in the game that have you shrunk down don’t need you to be shrunken down. At the same time, being able to explore and traverse a Duke Burger kitchen where the burger is larger than you are… helps keep things interesting.

The audio in the game is decent, with nothing standing out too much. Duke’s quips and the music are the best aspects of the game, with both suiting the mood most of the time quite well. If the lameness was toned down in most of the character lines, they could be a lot more enjoyable to listen to.

To me, the biggest downside in Forever is the level of graphical detail. No, graphics don’t equal gameplay, and nothing changes here. However, for a $50 game released in 2011, almost all of the objects, characters and terrain in the game leave a lot to be desired. The worst though, is a wierd focus that the camera has, where most of what you see around the center of your screen is a little fuzzy, until you look straight at something. You can see what I mean with this screenshot. This technique serves next-to-no purpose as far as I’m concerned, and is far more detrimental to the entire experience than beneficial. 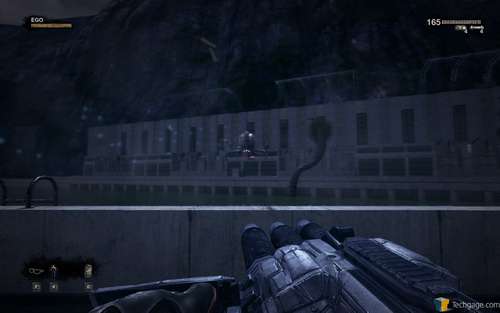 The single-player campaign took me about 8 hours to clear through, so despite taking more than a decade to get here, DNF is not a long game. For those that do enjoy the game, there is a lot of replayability, especially given some of the achievements that are available, and mini-games to be found. There are also “Ego Boosts” to be discovered as well, for a total of 100 across all levels, that will give a boost to Duke’s overall health bar. The game might be linear in design, but I still only managed to find about half before the game’s ending.

As both a big Duke fan and someone who doesn’t demand the highest quality production value out of a game, I enjoyed Duke Nukem Forever a lot, and I do mean that. In fact, once I completed the first run-through, I immediately felt like going back to explore certain areas again and start the game over on a harder difficulty. The game is far from perfect, and it’s not even a quarter of the game that Duke Nukem 3D was, but it did enough to appease this Duke fan.

That might sound rather positive compared to all of the other reviews out there, but let’s be real. It seems to me that others are being overly harsh for the fun of it, and perhaps the fact that the game took so long to get here doesn’t help. But 30% scores? That’s about as unrealistic as Duke himself. Are people knocking off 40% in one fell swoop just because of Duke’s poor humor (or rather, the developer’s poor humor)?

If I had to award the game a score, I’d give it about a 6.5 or 7/10, which to me is “decent”. Though I enjoyed the game, there’s still a lot wrong with it, such as the overly crude humor, super-linear levels and other things mentioned throughout this review. But for me, the gameplay mostly made up for the game’s downsides, and I do believe that those who jump into the game with an open mind and a bit of patience can indeed enjoy it.

Still not sure? Download the demo. Or if that isn’t an ideal solution, check out the DNF forums at Steam to read what actual players have to say, not reviewers who weren’t suited for the game to begin with.