Today, we’ll be taking a look at our second sample from Elitegroup, or ECS for short. Although not a new name in the motherboard business, they are relatively new in the gaming/enthusiast side of things. I first took a look at one of their boards last month, the X48T-A, during a brief roundup, and overall was left less than impressed.

For the $200 asking price, I felt we deserved more. It had no overclocking-ability, lackluster features and even the software CD left a lot to be desired. So needless to say, when I first received the P45T-A, I was a bit skeptical. I had right to be, because it didn’t take too long until I settled on the fact that the board wasn’t overly impressive.

But, I settled on my thoughts far too quick, because up to that point, I didn’t realize the board was being sold for $110 over at NewEgg. Instantly, my perspective changed, and I suddenly came to enjoy the board a lot more. Price isn’t everything, but this board actually performed better than the X48T-A in certain regards, and as long as you aren’t a stickler for features, this really should be considered for any low-budget build.

Like all other P45-based motherboards, ECS’ P45T-A offers the latest and greatest from Intel under the hood, such as 1333MHz FSB support, so any current-gen Intel CPU will work just fine. Because this is a budget model, certain features have been scaled back, though, such as the memory speed. While the standard is DDR2-1066 for P45, we are left with DDR2-800 speeds here, with the inability to go higher.

Memory is not the most important thing in the system, though, and if you have a decent kit of RAM with at least 4-4-4 timings, you will be smooth-sailing. Given the overall price, such a cut isn’t so much of a surprise. As you can see below, the board itself is rather attractive, with a dark color palette used and some of the most modest heatsinks you’ll find anywhere. 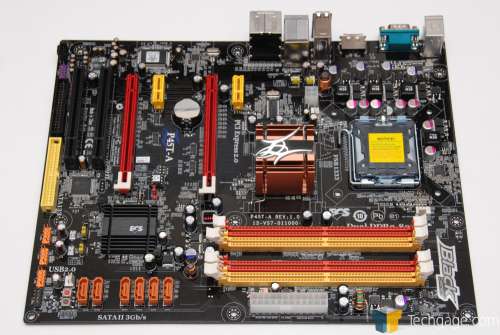 The board offers 6 S-ATA ports off the get go, although a few may be blocked depending on your GPU installed. If you are using a card similar in size to the 9600 GT, you should have no issue whatsoever. But anything like a 9800GTX or longer will block off one or two. This can be prevented in some cases if a flat-top S-ATA cable is plugged in, though that in itself would likely block off another port.

Also found down this side of the board is a power on/off and reset buttons, which is really, really nice to see on a budget offering. There’s little use in the overall scheme of things, but it was a thoughtful addition regardless. 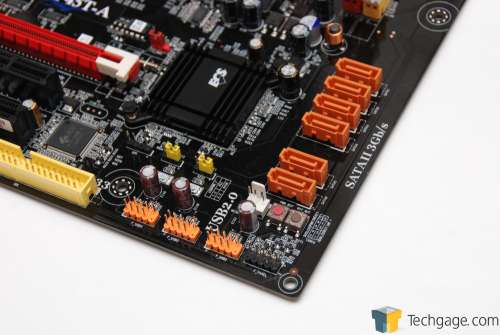 The board features two of each port: PCI-E, PCI, PCI-E 1x, which I have to give kudos to ECS about because they are all nicely spaced. If you were using dual single-slot GPUs, you could fill all six without issue. Notice the red tab between the two PCI-E 16x slots… that’s for the Clear CMOS. It’s very inconveniently-placed, as I’ll touch on later. 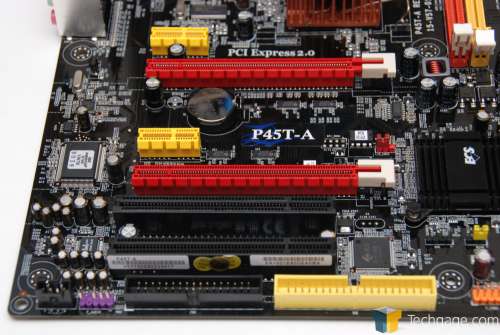 As mentioned, the board uses DDR2 in lieu of more expensive DDR3, which would really defeat the purpose of the board that ECS was going for. Unlike some other P45 budget models, this one still requires a 24-pin motherboard power connector. 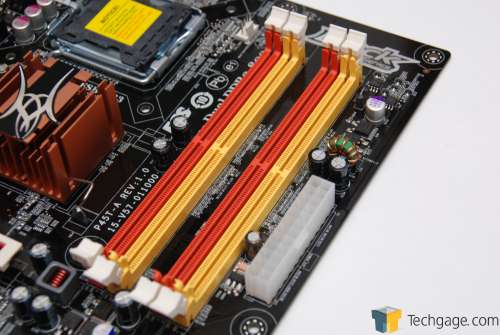 Around the socket, we can find ample room for most any CPU cooler out there, although if you have a very-low-profile model, you might want to make sure the caps don’t get in the way. ECS offers a four phase power solution here, which should prove plenty enough for any CPU out there, but it’s not going to help with successful overclocks.

Towards the top of the photo, you can also see the mostly-inconvenient 4-pin motherboard connector. Its location means a cable has to hover over the motherboard, which makes it very difficult to keep a clean chassis, if that’s your goal. 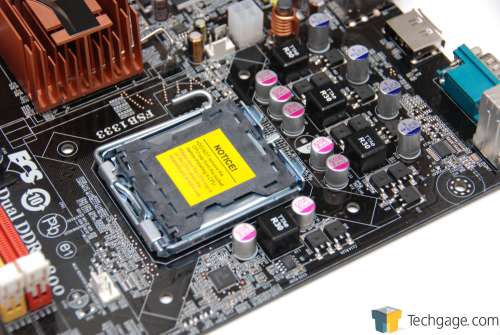 At the back, we find PS/2 ports, six USB, e-SATA, Serial, LAN and of course, the 7.1 audio. Not a bad selection given the price-point of the board, and the six USB ports are sure to be appreciated by many. 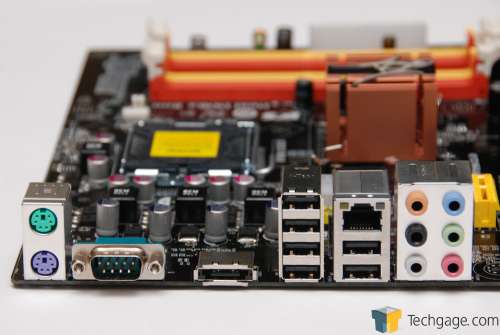 Inside the bundle are a few S-ATA and IDE cables, the I/O panel for the back, the manual and driver CD-Rom. Like the X48T-A I took a look at last month, this driver CD does not work with 64-Bit Windows, but you are able to browse the CD manually for the drivers you need. 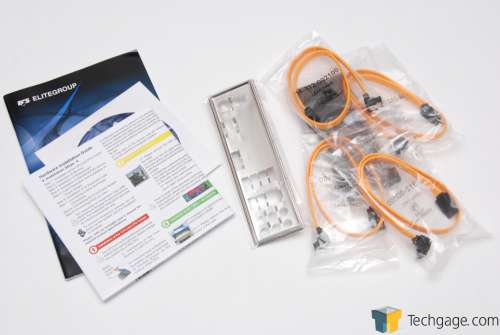 The P45T-A isn’t going to win awards for its bundle or board design, but it’s a $110 offering, and that does change everything. The board itself is far from perfect, with certain awkward layout decisions, but it’s all manageable. Can we say the same about the BIOS?