Whenever I get dragged to the mall, I often wander into stores like Brookstone and The Sharper Image, which are filled with novel gadgetry of questionable necessity and utility. These stores exist to peddle a variety of gifts for the tech-heads in people’s lives, or anyone else on your gift list who appreciates nifty tech toys. When I received the MP300 speaker system from Edifier, I had a flashback to walking the aisles of superfluous gizmos at the Sharper Image store in my local mall.

But let me back up a bit first. The story of the speaker manufacturer Edifier is a decidedly uncommon one. Edifier’s engineering and design facilities are located in Canada, while their manufacturing is located in China. Edifier doesn’t simply select models from the catalog of a Chinese speaker manufacturer and then apply their own brand name â€“ they take an active role in the design of each product, which gives them the ability to produce products that are a cut above the typical poorly-designed Chinese product that is found in the lower end of the price spectrum, and the result is a product line that offers significantly better value. 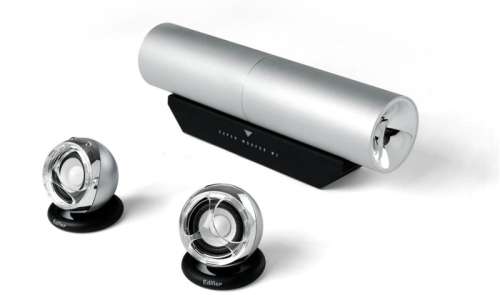 The MP300 is a more recent model from Edifier, styled as a portable speaker system for the traveling user who longs for better sound than that provided by a laptop’s built-in speakers. It’s a three-piece system that has two spherical satellites and a tubular “super woofer” whose enclosure is actually made of aluminum. The satellites sit to either side of your laptop, while the super woofer sits behind. And when it’s time to pack it up and go, Edifier even offers a padded carrying case. 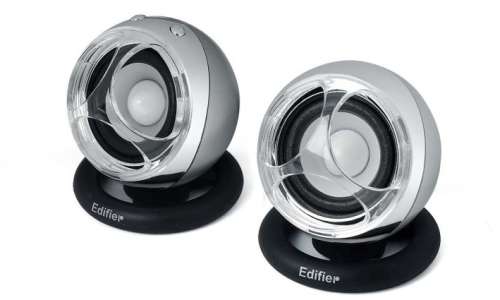 Those of you who are familiar with the workings of loudspeaker technology know that small size can be a major limitation on performance. There are reasons why high-end home theater systems use large floorstanding “tower” speakers â€“ size definitely does matter, because it affects the speaker’s ability to move air. Despite the attractive styling of the Edifier MP300 system, its size could put it at a distinct disadvantage when compared to larger three-piece systems. Let’s take a closer look at the MP300 system, and see if it can serve up a satisfying performance.