The Edifier MP300 is the smallest speaker system I’ve encountered (even smaller than the JBL Creature system), and one of the better looking as well. Let’s take a look at the features of the MP300 system. 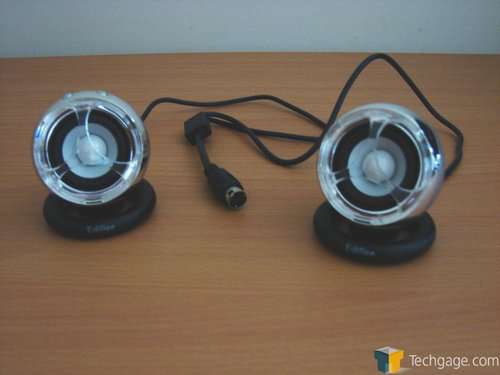 The satellite speakers each employ a single 1.5″ speaker driver with a coated paper cone and Neodymium-Iron-Boron magnet. Wherever you see “Neodymium” magnets on a product’s feature list, the actual composition of the magnetic material contains mostly iron, with smaller amounts of boron and the rare-earth element Neodymium, which produces magnets that have approximately ten times as much field strength for their weight as the more common ferrite ceramic magnets found in the majority of speaker drivers today. Both the drivers in the satellite speakers and the super-woofer module use neodymium magnets, which improves their efficiency. The right satellite speaker has two buttons for volume control. These work similarly to the controls of the JBL Creature system; pressing and holding both buttons causes the system to turn on or shut off. 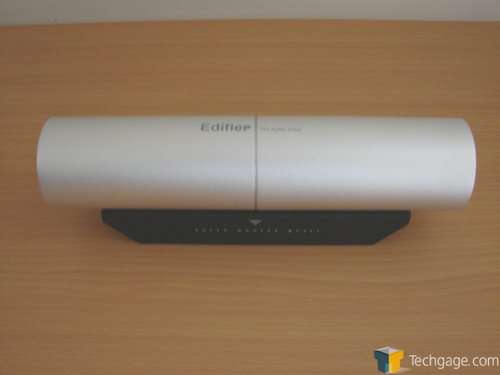 The super-woofer speaker is rated to provide output to 75 Hz, which is excellent bass extension when you consider that the super-woofer driver is only 2″ in diameter. It’s mounted mid-way between the two halves of the tubular aluminum enclosure, which also serves as a heatsink for the system’s amplifier, housed in the black enclosure beneath the tube. The super woofer also has a blue LED that indicates the operational status of the system. While the system is switched off, the LED slowly pulsates instead of being steadily illuminated. The rear of the super woofer contains all the connection jacks for the system. 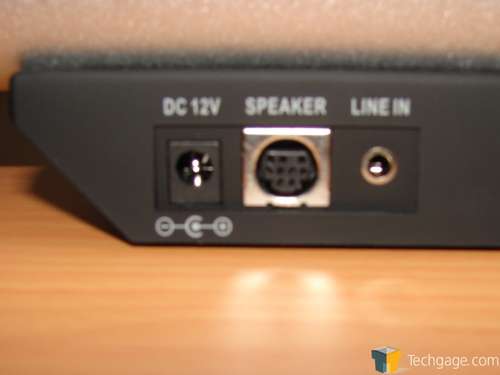 The super-woofer enclosure is a “bandpass” configuration, which means that the enclosure incorporates two chambers, with the bass driver being mounted to a baffle between the two chambers. One of the chambers is vented to the outside, while the other is sealed, and the vented enclosure acoustically filters out higher frequencies that are outside the woofer’s intended “passband” â€“ the range of frequencies that the acoustic filter is designed to pass to the exterior. Because bandpass enclosures use acoustic filtering, they are inherently more efficient over their frequency range, and produce additional output through resonance magnification. Only one of the chambers is vented; the vent flare at the opposite end is simply a dummy for aesthetic appeal. 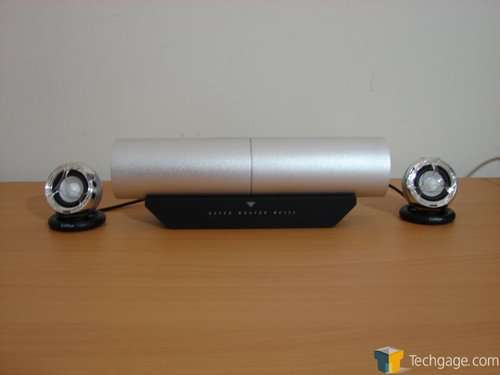 The system’s amplifier has a feature called E.I.D.C., or “Electronic Intelligent Distortion Control”. This is essentially an intelligent limiter feature that prevents the speakers from playing louder than they can do so cleanly, and the result is a system that’s very stable at higher volumes, instead of launching into ugly distortion. The amplifier itself supplies 2.5W RMS to each satellite speaker, and 9 watts RMS to the super woofer, for a total of 14 watts. This doesn’t sound like a whole lot, but when you consider the system’s size, it’s actually quite a bit of power.