For testing the Edifier MP300 speaker system, I connected the speakers to my reference machine, which employs a Razer Barracuda AC-1 sound card based on the C-Media CMI8788 OxygenHD chipset. I placed the MP300 system’s satellites on either side of my monitor, with the super woofer directly in the center. I tested the MP300s with a variety of tracks from my extensive collection of 192kbps WMA files, as well as a couple of favorite albums from my CD collection. 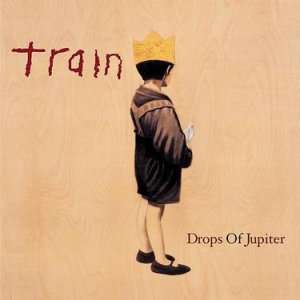 Train’s Drops of Jupiter album is a well-recorded album that’s a great test for audio systems. The album’s wildly-popular title track contains a variety of instrumental sounds, and is an excellent test for a speaker system’s ability to render subtlety in the background. The MP300 speakers had some trouble reproducing this track in all its clarity, due to a â€˜cupped’ coloration in the midrange, and the highs sounded somewhat rolled-off. The latter phenomenon is likely caused by the protective plastic shield over the front of each satellite speaker, which blocks some direct radiation of high frequencies, and causes some of the high frequency energy to be reflected back into the cone driver before being reflected again into the room. This caused the MP300’s satellites to sound smeared. The super woofer hung in there, and added a surprising amount of fullness and “thump” to the sound. Kick drum hits caused a tiny hurricane of air to come rushing from the flared port on the end of the super woofer.

The Brian Setzer Orchestra’s album The Dirty Boogie is a fine example of old people refusing to let the past die. The album contains Setzer’s signature enjoyable rip-roaring interpretations of big-band rock favorites of yesteryear, and also has several characteristics that can reveal a sub-par speaker system. Unfortunately, this album didn’t do the MP300s any favors, either, reproducing both Setzer’s distorted guitar tone and the Orchestra’s horn section with an unsettling amount of upper-midrange hash. The performance was significantly better than my Gateway laptop’s marginal built-in speakers, however. The MP300 speakers are also impressively crankable, and retain consistent sound even at maximum volume. 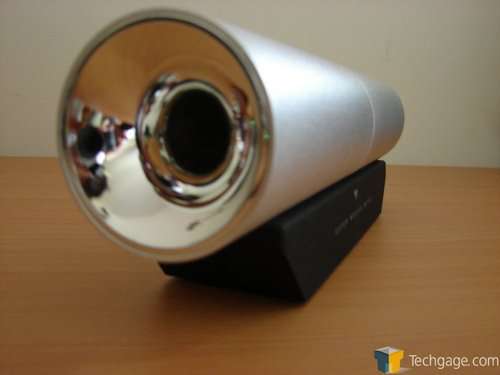 I also tested the system with some sinewave test tones, and found that the super woofer indeed delivered on its 75Hz low frequency extension rating, with useful output even as far down as 50 Hz. The test tone sweep also revealed that the tuning frequency of the bandpass tube enclosure is somewhere between 95 and 100 hz, since sine wave tones in this vicinity produced such enthusiastic air movement from the vent that nearby papers began to levitate on my desk, accompanied by wind turbulence noise from the vent. I spent nearly a half hour experimenting with this phenomenon. 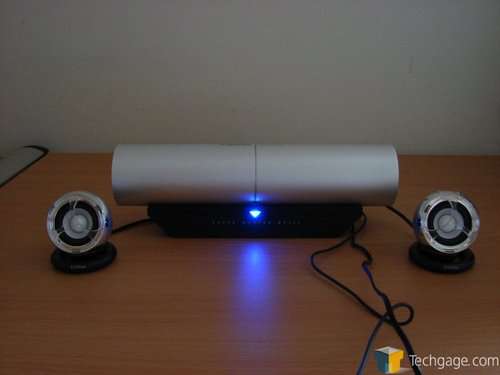 This is a good place to mention a couple of other “nice” features of the MP300 system. When you mute the system (by pressing both buttons on top of the right satellite speaker), the volume fades out. When you bring the system back from a muted state, the volume slowly fades back to its original volume slowly instead of abruptly. The system also remembers your most recent volume setting when coming back from a muted state. These are nice touches that I wouldn’t expect to find on an inexpensive system like the MP300.