There are plenty of good reasons why you might choose a speaker system like Edifier’s MP300. If you do a lot of mobile presentations, or if you’re looking for a minimalist speaker system for your laptop, the MP300 would be an excellent fit. For their size, the MP300 speakers try exceptionally hard, as evidenced by the torrents of air rushing through the super woofer’s vent while playing music at loud volumes. The MP300 speakers are also user-friendly enough that your mom could use them. And, of course, they boast artful styling worthy of The Sharper Image. 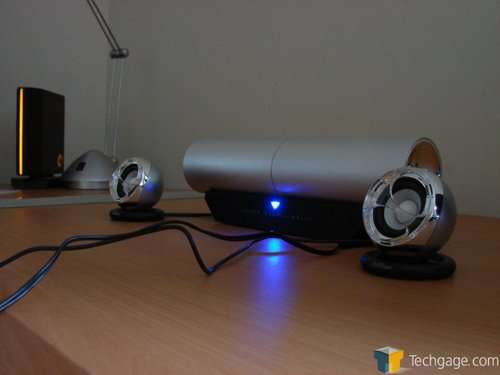 The small size of the Edifier MP300 speakers worked against them, however. The super woofer impressed me with the amount of thump and fullness that it could add to the tiny satellites’ sound. If you need any proof of this, simply jam your finger into the bass port on the side of the super woofer so that only the satellite speakers are audible. Still, truly deep bass remains out of reach with the MP300 system. I’d consider it to be on the same level as a larger two-piece speaker system having only a pair of speakers and no subwoofer, like the Bose Companion 2 or the Klipsch Groove PM20 speakers. The visual impact of the Edifier system is a lot smaller by comparison, however, which some may appreciate. Because of the small size of the satellites, though, the sound was somewhat lacking in warmth, a common problem with systems that employ small satellite speakers.

Some of the MP300 system’s sonic shortcomings didn’t have anything to do with their size, however. The satellite speakers suffered from “TV Speaker Syndrome”, in which the sound has a distinct â€˜cupped’ coloration that may be caused by sympathetic vibration of the speaker’s enclosure itself. The slight smearing in the high end that I noticed is likely caused by the plastic shields that protect the satellite drivers from damage. Both of these things, I feel, could have been easily improved upon by modifying their design.

In the end, the Edifier speakers didn’t shatter my expectations of what a small speaker system in its price range should be capable of. The MP300 speakers aren’t high-fidelity, though they do offer a huge improvement when compared to the built-in speakers of many laptops, and for that application I can recommend them, with reservations. There are better alternatives if you’re looking for speakers for your desktop, such as the aforementioned Klipsch Groove PM20 and Bose Companion 2 speakers (which would likely offer less distortion and better overall sound quality), but these other systems aren’t designed with the same focus on portability as the MP300 system, and the included carrying case is just more evidence of that.

The Edifier speakers earn a Techgage score of â€˜7′, because while they’re well-designed, and don’t sound bad, you can do better without spending all that much more. Don’t let this give you the wrong idea of Edifier’s product line as a whole, however â€“ some of their larger products for the desktop audio market are widely reputed to be an excellent value, and very well reviewed by other sources. We hope to review more Edifier products in the future.