Are you building a huge machine and require a power supply to match? Enermax has got you covered. Their Galaxy 850W fully supports Quad SLI, Quad core CPU, mass amounts of hard drives and your other hardware. It passed with flying colors in our stress tests, so read on.


When it comes to testing, I want to get down to the nitty gritty. I already know that my system will not pull enough power to remotely tax the Galaxy and because of that, I had to improvise. My current system consists of:

This is somewhat of a mild system compared to what else is out there now so to get a bit more powerful system, I turned to a good friend of mine, Kyle Felstein out at All American Computers. There I have access to an ungodly amount of drool worthy hardware and today, my goal is to use what he has to attempt to tax this power supply. Grabbing my multimeter, I headed out to Terre Haute, Indiana for some PSU testing goodness. For absolute testing, I am now using the following hardware: 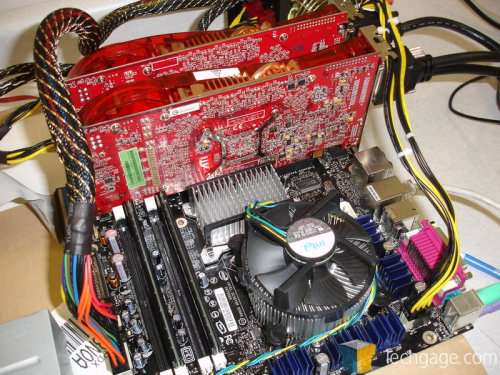 At Techgage, we do not currently have access to high end power supply testing equipment. At my disposal are my multimeter and the ability to test the Galaxy in a real work environment. I will be transferring multiple large files across the hard drives, looping 3D Mark ’05 and calculating Pi to 32 million places using Super Pi. This is certainly more than anyone will ever be doing but it does get every piece of hardware into the action. To record the rail results, I will be using Everest Ultimate Edition 2006. Everest records the 12V rails as one so I will be braking out the handy dandy multimeter and doing this the old fashioned way. 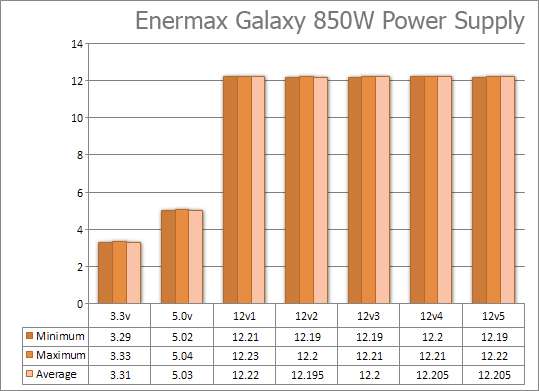 The results have to speak for themselves. While I was not able to stress the Galaxy to full load, I was able to put it through more than most anyone else will every subject their power supply to. All the while, the Galaxy stayed remarkably stable.

Just for kicks, I placed the 850W next to the 1000W and took a comparison picture. Aside from the ratings and the internals, the two power supplies look exactly the same. 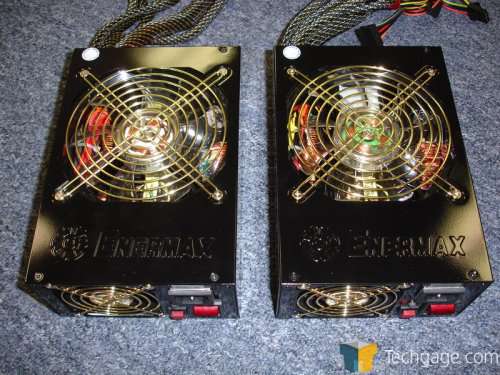 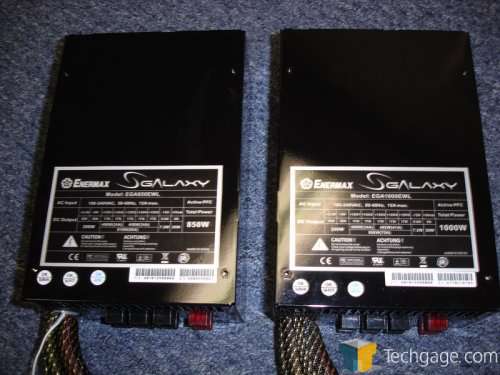