Enermax has provided a “one-touch-backup” solution in their external hard drive enclosure, the Glory. However as we quickly found out, the key backup features are not as glorious as the rest of the product.


The installation for the 3.5″ IDE hard drive is done by simply taking out two screws in the back on the case, and sliding the cover off. The IDE ribbon cable and molex cable connect to the hard drive at the rear of the enclosure. Once everythingâ€™s put in place, the hard drive slides in, and you can close the unit the same way it was opened. If that wasnâ€™t easy enough, Enermax includes all of the installation instructions in the user manual (considering some enclosures donâ€™t even come with manuals). However, the instructions seem to be written very poorly. Itâ€™s easy enough to follow, but the English could have been better. 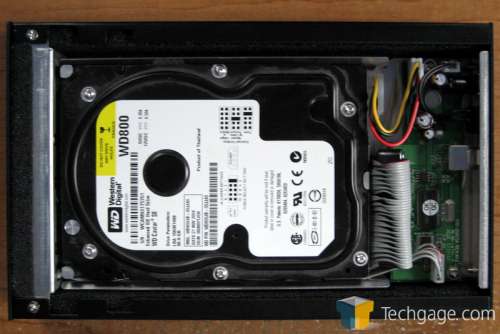 Hereâ€™s the enclosureâ€™s board, with a hard drive connected. The Glory uses a Cypress USB chip, which Enermax claims to offer â€œmaximum performance”. 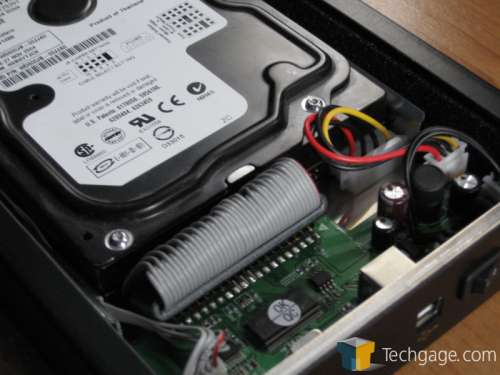 The hard drive needs power from an outlet to work, so both the AC adaptor and USB cable need to be plugged in while the drive is in use (which is no surprise here). Once the hard drive is connected and turned on, the Glory will show up as a regular drive in My Computer in Windows (or the Finder in OS X, mountable as an IDE drive in Linux, etc.). The Glory will have the same label as the drive that was put inside, so if you have an unformatted drive fresh out the box, formatting it is done in the same fashion as an internal drive. 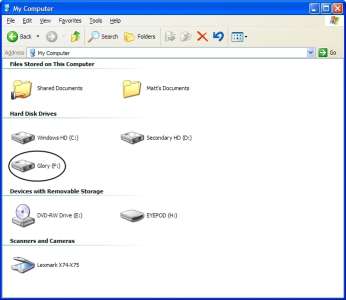 Even though the drive will show up in all operating systems, Enermaxâ€™s software only works with Windows 2000 and XP. If you donâ€™t install the software, the drive will still be usable, but the buttons on the enclosure and backup features cannot be taken advantage of. This is disappointing, because the major selling point of the enclosure is limited to Windows users only. Iâ€™d love to see Enermax provide drivers for other platforms in the future, or give out documentation for coders to write their own.

After the software is installed, you should notice a new icon in your taskbar. Clicking on this will give you the option of creating a boot CD, which weâ€™ll get into later.

Pressing a button on the enclosure will each open a different window. This leads me to my first complaint: the software can only by accessed by pressing the buttons on the case, and there are no shortcuts that are created when the software is installed (other than the one that actually enables the backup features), so you have to press one of the buttons on the enclosure (which, in my case, means leaning over my desk instead of clicking on an icon) every time you want to run the software. Fortunately, programs can be found in the default installation directory, and you can create your own shortcuts.

The first button will launch the drive backup feature. Here, you are given the option of whether or not you want to backup a specific folder, or all of the files on a hard drive. 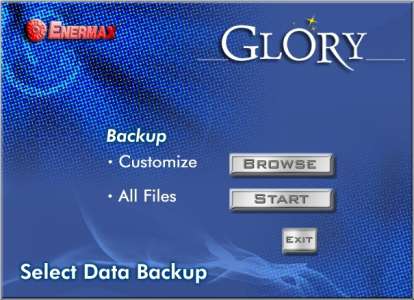 The problem with the data backup feature is that it doesnâ€™t actually work like it should. Instead of copying the folder that was selected, it would only make a backup of my â€œMy Documents” folder, regardless of what folder or drive I chose. This is a major issue that Enermax needs to address.

The O.S. backup feature shared a similar problem. Unlike what is stated in the manual, the O.S. backup doesnâ€™t just copy the system files, instead it mirrors the entire drive the operating system is installed on (which, in turn, eliminates the need for the â€œAll files” backup choice that came before it). The only difference here is that the computer will reboot to a DOS prompt, and run Enermaxâ€™s software. Since I have 105GB of space used on my hard drive and 80GB on the external drive, the feature wasnâ€™t even usable without removing what files couldnâ€™t fit. 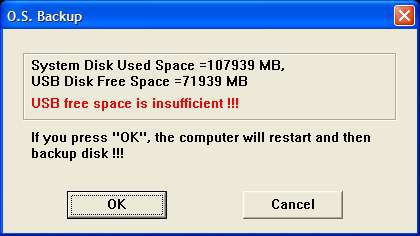 Thereâ€™s still more to complain about on the software front. Even if you transfer files without the softwareâ€™s help (through Explorer, or another operating systemâ€™s file manager), the restore feature will only move back files that were transferred using Enermaxâ€™s O.S. or data backup functions on its software. Creating a live CD (or using the same software disk that comes in the package) will allow you to restore the operating system without having to boot into a working Windows install. 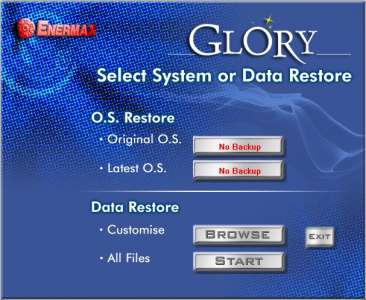 Despite the problems with the software, the Glory still has some redeeming qualities. Read and write access left the drive inside dead silent, and temperatures werenâ€™t even warm to the touch. When I put my ear next to the case while data was being transferred, I could hear a soft crackling noise, but itâ€™s nothing you would hear under normal conditions. The driveâ€™s performance topped out at around 35MB/s using HD Tachâ€™s benchmark.

Everything except the software left me impressed with the Glory. It was quiet, fast, and had a solid construction. That being said, I just canâ€™t find myself recommending it. As I mentioned earlier in the review, the software only available on Windows, and it was a pain to use. Not only would it refuse backup what I wanted most of the time, it would also crash every time I closed it. Everything about it was counter intuitive to the point of frustration.

The CD that contains the Gloryâ€™s software is also bootable in case your computer happens to fail before you create a live CD, but this was not mentioned during the install process or in the manual. Before you reboot your computer, the CD needs to be taken out, or the computer will boot into Enermaxâ€™s recovery software if the optical drive precedes your hard drive in your BIOS boot priority.

The buttons on the front of the case were flush with rest of the body so they were often hard to press. This is a minor issue, but if Enermax wanted to encourage their customers to keep their data safe, they could have done a much better job at eliminating the annoyances that came along with their product. 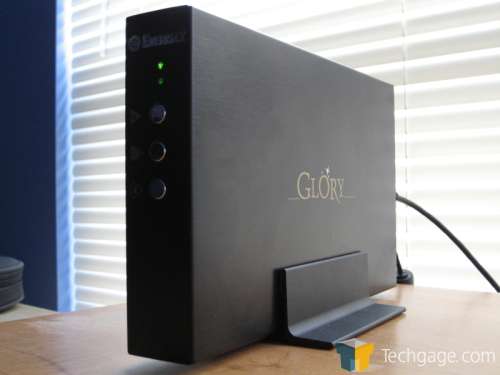 To be fair, Enermax could easily update their software to fix the issues I encountered, but until then, their backup solution is beyond useless. It leaves an ugly blemish that manages to differentiate it from its competition, but not in a good way. The atrocious software has spoiled what could have been a great product.

If Enermax came out with a slimmed down version of the enclosure without the need of software, I would have no problems buying one. If they managed to fix the problems it has, I would even be first in line. But until that happens, stay away. The Glory will only create more problems than it will solve.