Since Windows XP Pro 64-Bit was released, there has been a lot of speculation of whether it would help current gaming or anything else in general. I put both versions of the OS through a round of benchmarks to see if the 64-Bit does indeed offer any advantage.

Let’s start off with a classic gamers benchmark, 3D Mark 01. When it first came out, back in the day, ’01 really pushed our hardware to the limits. I clearly remember my jaw dropping when I first seen the Nature test, which was quite fluid on my GeForce 3 MX. At any rate, ’01 introduced Vertex Shading as well as Shader Model 1.4, and is built upon DirectX 8.1. I used ’01 to test, just to see if the 64-Bit had deteriotated quality or performence, which is hasn’t. 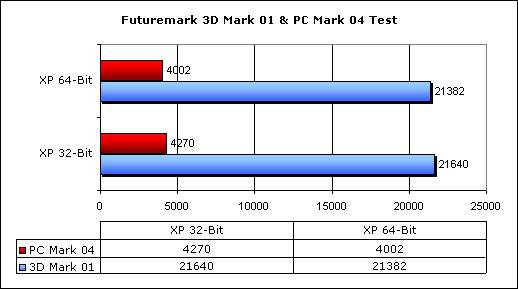 Here we also tested the PC Mark ’04 complete suite test. As you can see, both tests scored higher in the 32-Bit OS, but not so much that you would actually notice it during regular gameplay.

Here we have the two newest 3D Marks to test. 3D Mark ’03 is DirectX 9a based, but only the Nature test utilizes it to the full potential. 3D Mark ’05 also uses DirectX 9, specifically the ‘c’ revision, and is much more intense. 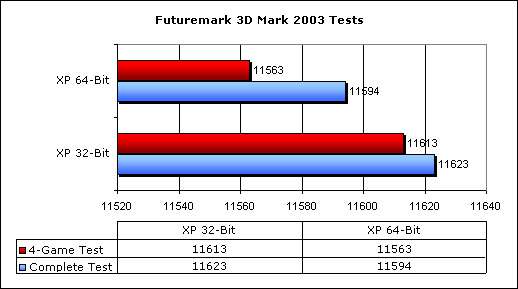 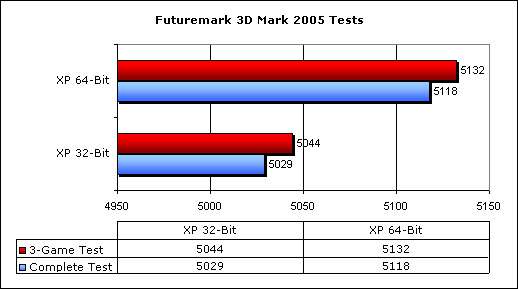 We can see from the results, that the 64-Bit performed lower in the ’03 tests, but higher in the ’05. Once again though, the differentials in between the scores are so little, that we may as well consider them equal.