A monitor stand might sound like a simple product, but if you happen to pick one up that’s built poorly, you’re going to quickly regret it. This is especially true with stands that support multiple monitors – some are simply built better, and designed better. With Ergotech’s Freedom Quad Desk in the lab, let’s see what it’s made of.

I sometimes feel like I could write a 1,000 word review about a paperclip, but here I managed to cover this stand’s highlights and the entire installation process in a mere 1,300. With so few words, it almost feels like I’m doing the product a disservice, but in the end, monitor stands are really quite simple, and when one is as well-built and well-designed as this one is, a couple of sentences can sum the product up very quickly.

The last stand I had was a bit of a nightmare. It was composed of far too many parts, had clunky mounts, and had difficulty in keeping my monitors exactly where I put them – something that resulted in me accidentally breaking a piece off of one of the mounts. Suffice to say, that stand left a very bad taste in my mouth.

I had no such problems with Ergotech’s Freedom Quad Desk, however. From the moment I took the stand out of its packaging, I quickly realized just how simple it was going to be to set up. Admittedly, the pivots were a bit tough to turn, and I was worried I was going to break them, but I believe that to be an after-effect of the nightmare mount (quick note, though: don’t worry about turning the pivot once it’s connected to a display until it’s connected to the stand). 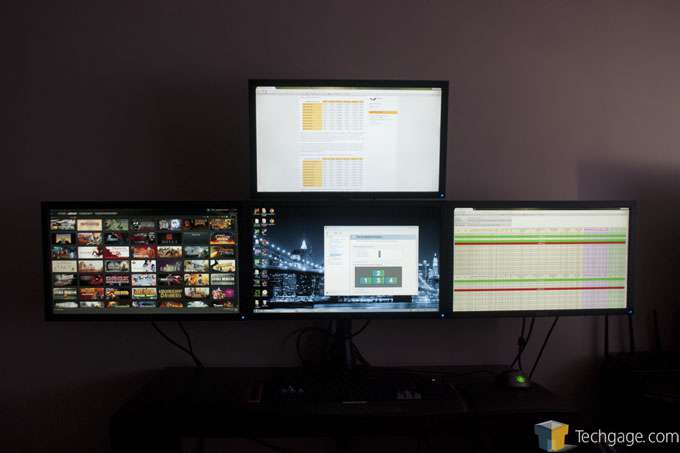 If I had to start the install process over from scratch, I believe it’d take no more than a half-an-hour to go from unboxing to having all of the displays installed – things truly are that simple. The hardest aspect of the entire setup is shared by all multi-monitor stands – you’re going to be spending a little bit of time perfecting that angle. The only reason this can be complicated is because the pivots have to allow you to change a display’s angle, yet it also has to retain the angle you settle on. Because of this, it’ll take a bit of effort to perfect, and if you don’t have a load of patience, like me, it might never be. The end result will still look fantastic.

Overall, Ergotech’s Freedom Quad Desk stand has impressed me on all fronts – installation is simple, it’s built like it means business, and it features a clever design. It’s a winner in my book. Don’t need 3+1? 3×1 is taken care of just as well with the Freedom Triple Desk stand.

Note: One thing I noticed is that some Amazon sellers are not selling this exact stand model, even though that’s what’s being listed. Instead, you’ll receive a 2×2 stand from some of them. So, before buying, I’d recommend contacting the seller directly to ensure that they’re listing the correct model.