AMD’s top dog Radeon RX 6900 XT has landed, and we’re taking a look at its performance across a variety of 1440p and 4K workloads – with and without DXR. With the 6900 XT, AMD is taking care of gamers who want a premium product and have no qualm splurging on it – so let’s see how it fares against the competition.

To take a look at AMD’s big boy Radeon RX 6900 XT from a power consumption perspective, we’re using UL’s 3DMark Fire Strike 4K stress test, and have our test PC plugged into a Kill-a-Watt for monitoring the power draw. The PC sits idle for about five minutes after a cold boot, and then the stress-test is kicked-off for ten minutes, which is when the load value is captured. 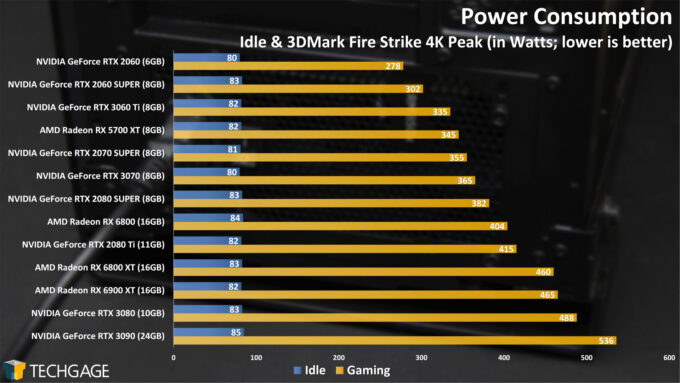 One of the best examples of AMD’s progress with its graphics cards is with the power consumption. For quite a while, Radeons were typically expected to be more power hungry than GeForces, something not helped by the Vega series of cards. Today, though, even the RTX 3080 draws more power than the RX 6900 XT. NVIDIA’s big gun RTX 3090 draws 71W more – and this is a workload that takes no advantage of the card’s RT or Tensor cores.

We didn’t capture temperature data here, but we can say with confidence that NVIDIA’s cards will fare better there – as long as we’re talking about the “reference” designs. We originally did all of this power testing when monitoring tools wouldn’t capture the RDNA2 cards accurately, so we’ll save that for the future.

AMD’s Radeon RX 6900 XT proves more difficult to sum-up than NVIDIA’s GeForce RTX 3090, despite that latter card costing so much more. In a way, it’s almost easier to understand the price hike on the NVIDIA side, because the RTX 3090 more than doubles memory from the RTX 3080, and has a difficult cooler. The RX 6900 XT, meanwhile, shares the same cooler as the RX 6800 XT, and comes equipped with the same memory density.

Ultimately, 16GB or higher isn’t going to benefit many people, either on the gaming or creator side, so AMD not increasing the memory size is really inconsequential. On the NVIDIA side, the 24GB frame buffer on the RTX 3090 isn’t going to benefit gaming workloads, or even the vast majority of creator ones. It could impact deep-learning workloads, but that is not the focus of the card. Both the RTX 3090 and RX 6900 XT are targeted squarely at the gamer, and both offer more than enough VRAM. 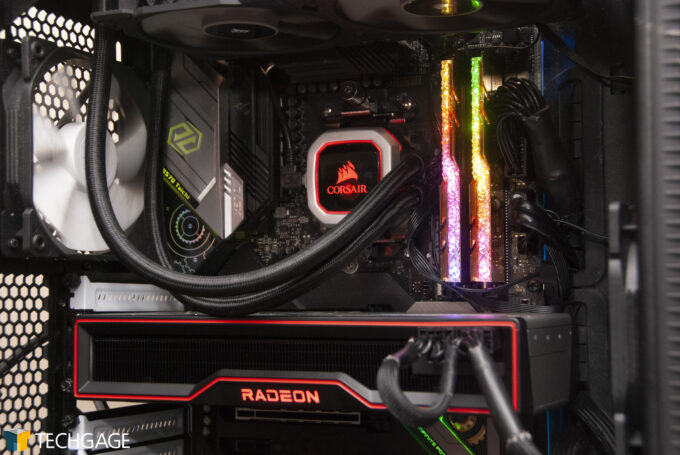 Reading around the web, it’s clear that the biggest gripe the community has with AMD’s new Radeons is the lacking ray tracing performance, and it’s really unfortunate, since AMD made humongous strides from RDNA to RDNA2. It’s not even a matter of NVIDIA having a full generation more to work on it – those RT and Tensor cores can make a huge difference when utilized properly. NVIDIA DLSS is basically required to run Cyberpunk 2077 with ray tracing at decent frame rates, even on top-end hardware.

Overall, it’s safe to say that the RX 6900 XT is a Radeon designed for those who want the best that Team Red offers, and don’t mind splurging for it, or forgoing advanced ray tracing performance – which doesn’t matter to everyone as there are thousands of games out there that don’t need ray tracing. More than anything, we’re glad to see AMD back in the high-end, and is giving NVIDIA a clear message that it’s not going anywhere, and is more than ready to fight.