In gaming what you hear can be as crucial as what you see. Indeed what you hear can make the difference between victory and defeat. Today we take a look at a gaming headset that promises to give you the upper hand by isolating you from your real environment while immersing you in your virtual world.

Sadly, Everglide doesn’t publish the specs of the drivers used in the s-500 headphones. I’m interested to know what they’re made from and how the diaphragm is configured but I imagine that I’ll never know. Most headphones in this price range will specify the type of driver, the diameter of the driver diaphragm, what it’s made from and the voice-coil diameter. Everglide might want to include these specs if they want to attract buyers with knowledge of the benefits of these various points in the configuration of the headphone’s construction. This is like buying speakers and not knowing if they’re a 2-way, 3-way or single driver design.

I tested the s-500 headphones with games, movies and music, I’ll cover my findings here.

I played Day of Defeat: Source, The Ship and Counterstrike: Condition Zero for the gaming testing. The sound was spacious. Environmental sounds were well placed and the cues were easy to track as you moved around the maps. The sounds of the various weapons were reproduced with realism and authority. Bullets whizzed by sounding very good as they tracked from left to right and in The Ship, it was pretty easy to clue into the sound of your hunter creeping up on you. During the testing I left my TV going at normal conversation levels to simulate background chatter found in LAN gaming and at moderate volume levels it wasn’t distracting in the least. Compared to my baseline headphones (Koss UR-40) I found that I wasn’t pushing the volume nearly as high to follow softer sounds.

I watched Star Wars EP III and compared the experience that I got from the s-500’s to the experience afforded me by my Logitech Z-560’s. The speakers (4.1 THX certified set) gave a bit more immersion in the sound from the movie. The center sound stage was better with the headphones while the rear channels with the speakers gave a higher level of realism. I found that tonally the s-500 was very close to the Logitech’s. This is pretty impressive as the Z-560’s are THX certified and that’s a pretty grueling process that requires very high fidelity. The s-500 are great for movie watching if you like to watch your movies at the volume that allows you to hear even the faintest of whispers. This is difficult for those of us with neighbors or family members on the other side of every wall.

I like my music loud. Up until recently I haven’t been able to listen to my music the way I like it since I couldn’t achieve the volume levels that bring a smile to my face. The Z-560’s get brutally loud but with neighbors on five sides out of six I can’t listen to my music at chest thumping levels. The Koss UR-40 headphones have a very refined sound, they have great bass for headphones but they have a bad tendency to break up at ear bleeding volume levels especially in bass heavy music. Not only that but they’re a bit "dark" sounding. By this I mean that the upper midrange doesn’t have the shine to it that I’m used to hearing, it’s a bit muted. The s-500’s on the other hand have a satisfying brilliance in the upper midrange without being brassy and harsh. Listening to "Redneck" by Lamb of God, the guitar had a very nice grind to it. The vocals had a nice natural tone to them even at ear splitting volumes and the bass never got muddy with no loud crackling from the drivers overloading during big bass drum kicks.

The s-500 headphones are slightly on the heavy side at 360g’s (12oz’s) and are a bit bulky but you quickly get used to them. I wear a hat when I game and the adjustment on the s-500’s easily accommodate my huge melon (size 7 5/8ths hat) while wearing my cap. They don’t bind even with the fact I wear glasses. Normally I run into trouble with headphones due to the fact that they press the temples on my glasses up against my head pressing them in between the ear cups, my ears and my head. Over extended periods of time this eventually leads to a roaring migraine. The UR-40’s and the s-500’s are about the only full ear headphones I’ve used that don’t do this to me. Yes there are the small open-ear style headphones but in my experience they don’t offer the same level of isolation nor do they have nearly the bass response and overall volume that full ear headphones do.

The s-500 Professional Gaming Headphones are a pretty nice set, they offer a great gaming experience giving pretty good cues considering that there are no front and rear drivers. The sound is very open and expansive without being harsh. Loud sounds are rendered nicely without distortion and thanks to the isolation afforded by the ear cups you don’t have to listen to them at ear splitting volumes to distinguish between quiet sounds. Happily though they sound great for music and movies, they have a very musical sound with good bass response and a nice bright presence that’s not overly bright and hard. 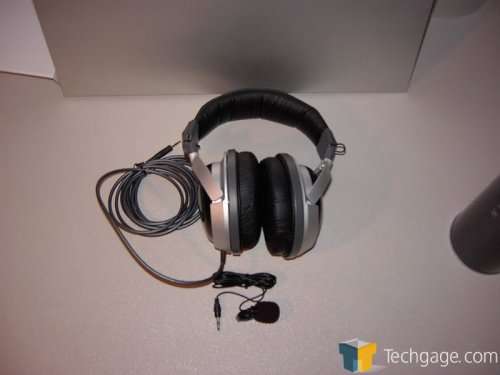 They’re comfortable which is a plus although if you’ve got a tiny head you might run into issues with them being a bit loose. The long cord on the headphones is another plus, this gives you a bit of mobilty while sitting behind the keyboard without requiring you to yank the headphones off every time that you want to slide a few feet away from your position. I wish that they’d put the same length cord on the mic, if you’re using the mic you’ve lost four feet of mobility.

Overall I’m awarding the Everglide s-500 Professional Gaming Headphones an 8 out of 10. The sound and comfort are both awesome, true you lose some spacial cues but what you gain in terms of fidelity is well worth the trade off. If you’re in the market for a new gaming headset (or new music headset, music headset, Etc) do yourself a favor and give these a look. At nearly $100 they’re a bit on the pricey side but they sound and feel worth it.