In my look at NVIDIA’s GeForce GTX 980 Ti last month, I designated it the “new King” of high-end GPUs. That conclusion was reached based on the fact that it’s much faster than the GTX 980, warranting its $150 price premium, and costs $350 less than TITAN X, despite offering similar performance.

On the topic of “similar performance”, there’s one little thing that can help turn that into “better performance”, and EVGA’s Superclocked+ edition has it: a boost of 102MHz to the reference 980 Ti’s base clock.

Yup – this card is going to be fast.

Outside of its performance, the best feature of the 980 Ti is its 6GB framebuffer. While I don’t believe 4GB is a harsh limit for most gamers, it can be for those looking to future-proof 4K gaming. That’s emphasized if we’re talking about multi-GPU configurations, since the performance made available would allow you to crank even a properly modern game’s detail levels. 6GB might seem like a hefty amount of VRAM right now, but down the road, it could become important.

I’m a big fan of the recent coolers NVIDIA’s been decking out its latest high-end GPUs with, and I admit (sorry, EVGA) that I’d prefer it over any third-party cooler. It just looks awesome. That said, EVGA’s latest ACX 2.0 cooler is no slouch, and does have some visual bits that I find quite nice. These include the etched name on the card’s top, and heatsink fins that can be seen from any angle. 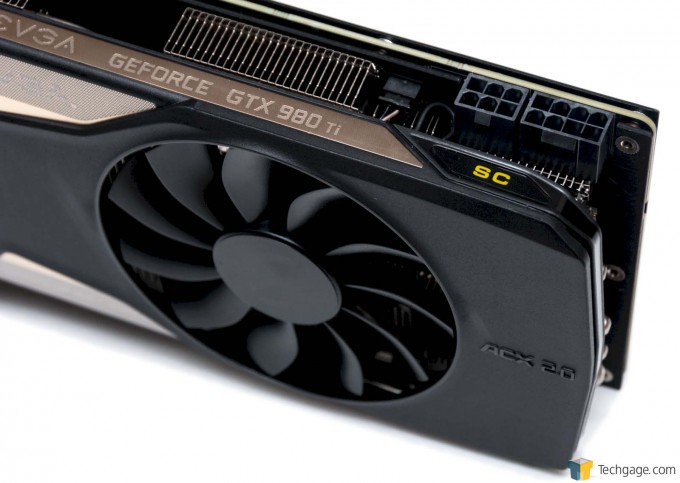 As with the reference 980 Ti, EVGA’s Superclocked+ edition requires both an 8- and 6-pin power connector. Despite the fact that this card boasts a higher clock speed than reference, EVGA still considers this to be a 250W TDP part. Interestingly, it might have the right to, as we’ll see on the final page of this review (hint: it doesn’t draw that much more than the reference card).

Also similar to the reference 980 Ti, this card has 3 DisplayPort connectors, 1 HDMI, and 1 DVI. All of these are protected with rubber inserts, as are the SLI bridge and PCIe connectors. 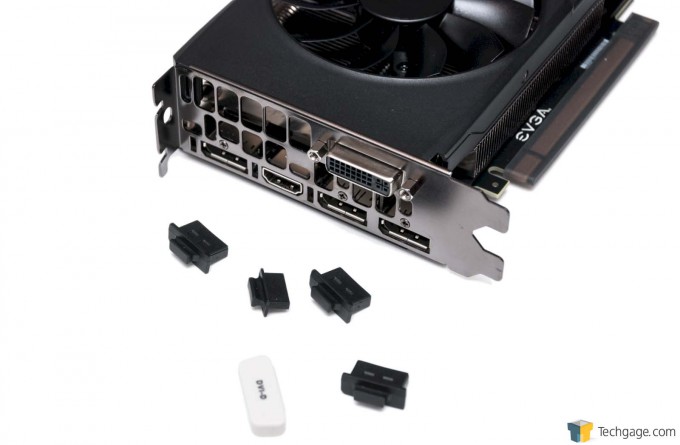 At the back, we get a good view of the included backplate. A backplate can be a boring addition to a graphics card, but EVGA spices it up here by etching its name into the back, along with including the model of the card below it. When the card is installed, this branding will be properly facing you. As mentioned earlier, the point of a backplate is to increase durability as well as reduce temperatures. Versus a bare PCB, I also think it looks good. 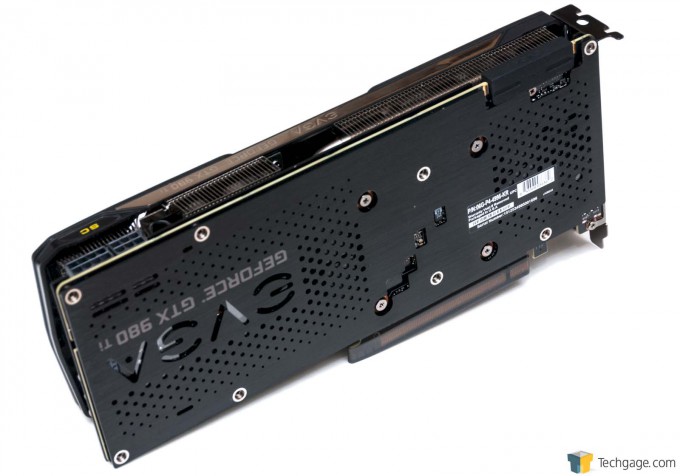 Inside the box is a couple of coupons for some of EVGA’s other products (yes, you’re reading the “50% off” correctly), a wall poster, a couple of large stickers, as well as miscellaneous documentation. 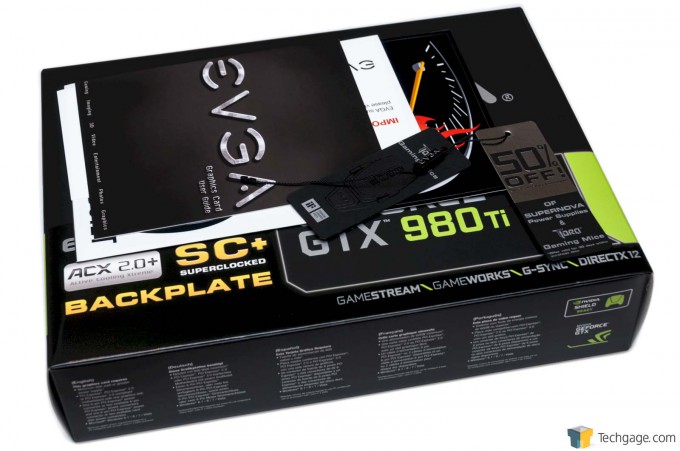 On account of the fact that A) We know what the 980 Ti brings to the table, B) We know what recent Superclocked ACX 2.0 cards bring to the table, and C) We can gauge what a 102MHz clock boost can do, I have doubts we’ll be that surprised with some of the results. But, as a card that’s bound to be faster than a reference TITAN X, yet costs a lot less, I think the Final Thoughts section will be easy to write. But, before I get too far ahead of myself, let’s get right into some performance results.