So, was NVIDIA’s GTS 250 worth the wait? That’s of course a comedic question, because as mentioned earlier, the company’s latest card is little different than the 9800 GTX+, which we’ve had available since last summer. That’s important to point out, because if you already own a decent GPU that you purchased within the past year, then the GTS 250 is not likely for you. It would be much more worthwhile to go with something a little beefier, such as the GTX 260/216.

But while the GTS 250 doesn’t bring anything entirely new to the table, it’s not really a waste of time, either. After all, we received a revamped PCB that allowed for a smaller form-factor, we cut down on one power connector, we enjoy lower temperatures and also more memory. Not to mention a revised price. It’s a solid addition to NVIDIA’s line-up, but it’s still too bad that we didn’t see a truly current-gen product, such as a scaled-down GTX 260/216.

As mentioned in our last few graphics card reviews, we’re still in the process of re-benchmarking our collection of current GPUs, so we’re missing a few notable ones here. I regret not being able to at least include the HD 4850 512MB for comparison’s sake, but time constraints got the better of me. I’m confident in the fact that the HD 4850 is quite comparable to the GTS 250, though, just as the original 9800 GTX+ was.

The fact is, the 9800 GTX+ is still a great card, and as seen throughout our test results, the only real gain seen from having 1GB worth of memory on board was with higher resolutions. But, that fact is rather moot, because if someone has the desire to game at 2560×1600, they’re not likely considering a $150 GPU. At least I’d hope not! 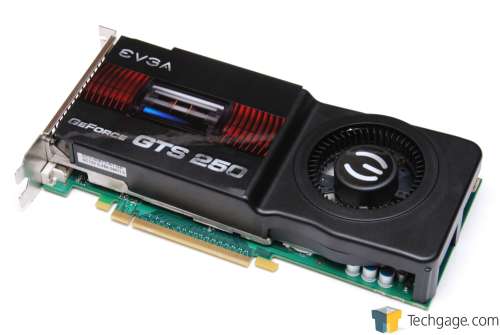 Where temperatures were concerned, things improved even further with the GTS 250. While both cards hit a load temperature of 76°C, the GTS 250 idled 7°C cooler. That might not seem that impressive, but realize that the 9800 GTX+ was utilizing a robust third-party cooler (ASUS Dark Knight), so for the GTS 250 to hit the same load temperature with a reference design is great.

Aside from the card itself, NVIDIA of course touts many other features as well on the side, including their PhysX technology, their CUDA platform and also their 3D Vision gaming peripheral. Consider it a good or bad thing, NVIDIA has really been on the ball with cool technologies lately, and I personally find quite a bit of value in each one of these. PhysX will of course become more appreciated as time goes on, but CUDA has some cool uses now (such as video encoding), and will also (hopefully) improve a lot more over the course of this year.

You can expect us to take a continued look at each one of NVIDIA’s extra technologies as time passes. In particular I’d like to evaluate CUDA-based applications a bit more, since I haven’t spent much time with them in the past. I tried to gather some opinions of Badaboom for this article, but I quickly realized that much more time will be needed before I can make some solid conclusions.

That aside, although article embargos lift today, the cards are not going to be released until next week (March 10). At that time, the 512MB version of the card will be available for $129, while the 1GB model, as we took a look at here today, will retail for $149.