Each time I post a graphics card review, I tend to say the same thing… “It’s a great time to buy a GPU”, and that’s definitely still the case. No matter what GPU you pick up today, the performance is going to be incredibly good, compared to what you would have gotten for the same price just a few years ago. It’s quite impressive when you can pick up a $150 GPU nowadays and see it run games at full resolution on a 30″ display.

But for those who don’t mind spending a little more for added performance, there are still many options available, from high-end single-GPU cards to dual-GPU cards, such as the HD 4870 X2 or GTX 295. As mentioned in the intro though, the top-end of things belongs to NVIDIA at this point in time, with both of their most-recent cards.

Again though, any GTX 285 is going to be wasted on a display of less than 24″, because at 1920×1200, the card begins to shine. But as I stated earlier, even a GTX 260/216 may satisfy the appetite for most people with a 1920×1200 resolution, and by taking a look through our graphs here, hopefully you can make your decision based on that.

The GTX 285 in general is a great card. As the fastest single-GPU solution available, it offers great performance, allowing high settings at any resolution available. Plus, thanks to dropping prices, it has become a rather good choice for the best performance currently available with a single card. But what about the SSC Edition from EVGA that we took a look at here today? 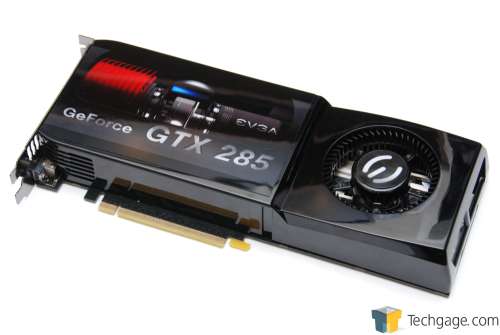 As we saw throughout all of our graphs, the SSC card proved to be noticeably faster than the stock-clocked GTX 285, on paper. During real gameplay, it would be very difficult to notice a difference, and that’s an important fact to consider. I don’t discredit “pre-overclocked” cards, because they certainly have their audience, but to me, it makes much more sense to get a stock-clocked card and enjoy the already-fantastic performance, because really, the differences between the stock and overclocked cards is minimal, as seen in our graphs.

Take note also of the fact that this particular card currently retails for about $60 more than the standard version (EVGA’s stock-clocked model is selling for $330 after MIR at one e-tailer), so that’s quite a price to pay for such a minor increase in performance. At this card’s ~$400 price point, you might as well go the extra mile and just pick up a GTX 295 for $500. If that’s not an ideal route, then I recommend simply saving your $60 and sticking with a stock-clocked model. If you need to feel like you have the fastest GTX 285 currently available, nothing stops you from overclocking it yourself.

Regarding overclocking of this card, I omitted reports because I wasn’t able to push it much further. The card as it stands is one of the highest-clocked GTX 285’s on the market, so it’s already at its breaking-point. The max stable clock I managed to hit was an additional 15MHz on the Core and 25MHz on the Shader. Since this GPU is not currently supported by EVGA’s own GPU voltage tool, I was unable to test it out to see if it could be pushed further.