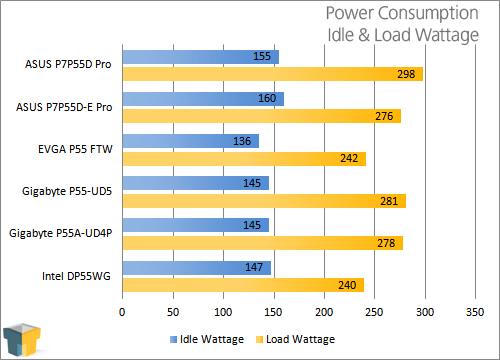 I’m not sure how I can begin to figure this one out. Despite the fact that EVGA’s board is more robust overall in terms of “bling” (namely, the external ECP 2 and also the pulsating EVGA “heart”), it proved to be the best for idle power consumption by a rather fair amount, while at load, it nearly matches the barebones Intel DP55WG. This is is a fantastic showing for EVGA, especially since it’s the others who tout improved power efficiency like there’s no tomorrow.

In talking to a representative at one of the largest motherboard vendors earlier this year (will remain nameless), something interesting snuck up in the discussion. For the enthusiast space, ASUS and Gigabyte are the biggest competitors, but who I talked to at one of these companies didn’t consider the other to be their biggest threat. Rather, it was noted that their biggest threat was EVGA. This surprised me, but after taking a look at this board, I’m having an easier time putting it all together.For a company that hasn’t been producing motherboards for near as long as the others, EVGA sure has come a long way in the past couple of years. Hands down, the P55 FTW is best P55 motherboard I’ve reviewed to date, and if I were to go out right now and pick out such a board for a personal LGA1156 rig, this is the one I’d pick up. From all perspectives, it’s quality, and despite that quality, it’s priced right.

Current pricing on the P55 FTW puts this board at $230 before a mail-in-rebate, and between $185 – $210 after the fact. Before a MIR, this board is a bit more expensive than all of the previous P55 boards I’ve taken a look at since the platform’s launch, but despite that, I feel that the premium is worth it, as the extra care EVGA has taken shines through in numerous ways.

Most important, the board has a common-sense design, and I couldn’t find a problem with component placing, nor had an issue with installation. To improve the general design further, EVGA took extra steps to set its board apart. First, the board includes not just one, but two 8-Pin motherboard connectors, for those with power supplies that happen to include two. There’s also the optional Molex on-board power connector. These, along with the 12+2 power phase solution and modified socket show that EVGA cares a lot about clean power delivery, especially when overclocking is concerned. 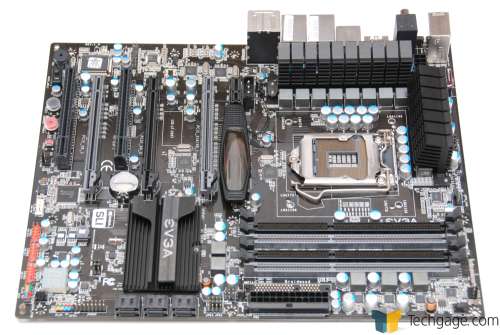 The power solution aside, EVGA includes other features that enthusiasts will enjoy, such as the LED BIOS code readout, the on-board power and reset buttons, not one, but a total of two locations for a CMOS clear button (three with the ECP 2), and even a dual-BIOS, just in case something happens to go wrong with one of them. For overclockers, the most notable feature is the ECP 2, which not only allows you to increase voltage to the CPU on the fly, but even disable PCI-E ports. These are features I’d never expect to see on a ~$200 offering.

Of course, if aesthetics matter to you, then chances are the board will continue to impress. If I could design my own motherboard, I’d choose similar colors as EVGA did here, because it looks great overall, and it really makes you want to use a chassis with a window, especially since the EVGA pulsating logo in the middle adds to the overall cool-factor.

Along with all this, the BIOS is incredibly robust, and so is the performance. While I tend to gravitate more towards boards around the $150 – $175 area for personal machines, this board impressed me enough to not care quite as much about the extra cost, because everything from the performance to the design to the presentation is top-rate. I never expected to ever be impressed by simple packaging, but I was here.

The downsides to this board are few, but if you’re someone who has more than 6 hard drives / ODDs to deal with, then the limited number here will be an issue. For USB, even though there are only 6 on the back panel, I can’t see that as being a problem for many, as four more can be added by way of your chassis’ front panel and also the add-in accessory EVGA includes.

Another downside that stands out is going to affect very few, and that’s if you have three dual-slot GPUs installed, you will rid out all of the slots except a single PCI-E x1. If you happen to be interested in taking the dual-GPU + PhysX card route, it’s recommended you use a modest card for PhysX, such as a 9600 GT or 9800 GT, which both use single-slot coolers.

There’s also the omission of S-ATA 3.0 (Gbit/s) and USB 3.0, so if those technologies are important to you (probably not at this point in time), then you might want to keep it in mind. Both features can be added in later with an add-in card, though, so if it either technology becomes necessary to you in the future, you’re not going to be out of luck.

When all said and done, this board impressed me a lot more than I was expecting. As I mentioned, if I were in the market to pick up a P55 board, this would be that one. That speaks for itself.