Page 2 – Continued Tour of the Board

Many mid-range and higher motherboards today normally include at least 7 PCI/PCI-E slots, but this one again scales things back to just six, which for most people will still be fine. Of these, three are of the PCI-E 16x form-factor, meaning they’re perfectly suitable for multi-GPU, while two others are legacy PCI slots, with the one on the absolute top being PCI-E 1x.

EVGA designed this board in such a way that a dual-GPU + PhysX dedicated card configuration could be used. If you take that route with dual-slot cards, both legacy PCI slots will be wiped out. You will retain the PCI slot at the bottom if you use a modest card, like a 9600/9800 GT, however. But anything higher than that will likely be equipped with a dual-slot cooler, and unless you plan to cool it with a water-block that doesn’t protrude further outward than a single-slot cooler, the PCI slot is going to be covered.

The lack of depth-of-field in this photo is terrible, but underneath the bottom slot, you can see four buttons. The left-most “switch”, to the right of the internal speaker, is for switching to the second or BIOS and back. The two round buttons are for power and reset, while the small red button is to clear the BIOS in the event of an overclock gone way wrong. 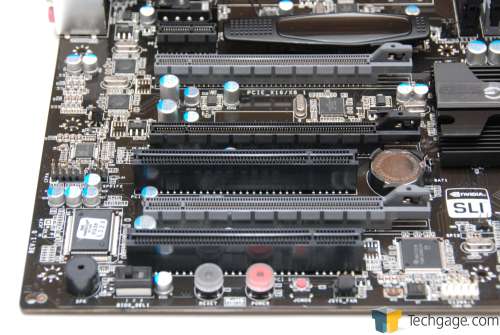 During a meeting I had a couple of months ago with EVGA, one thing that was pointed out to me was that the company looks at many different ways to improve a motherboard, and not just take the road of simple bling additions. One thing mentioned that I wouldn’t likely have noticed otherwise is the different filter cap layout inside of the socket. I looked around at different P55 boards here, and sure enough, the internal caps are different than the others. EVGA claims that these help provide even cleaner power to the CPU, and it’s probably up to you to decide whether or not its solution is better than the others.

Aside from the socket modifications, EVGA has prepped this board with a 12+2 power phase design, with the 2 being dedicated to the processor’s internal memory controller. And of course, who can miss the interesting heatsink design, which like the rest of the board, is pure black and looks great. 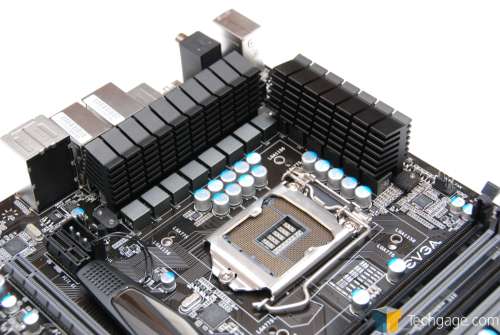 So far in our trip around the board, we’ve seen slightly less S-ATA ports than we’ve seen recently on other P55 boards, and also one less PCI-E slot. The back I/O panel continues this tradition, with just six USB 2.0 ports, compared to 8 – 10 on other boards. To be fair, this isn’t going to be considered a lacking feature for most people, and when USB ports are added by way of the chassis (and more if you add in other front panels/accessories), I’m willing to bet there will be few complaints.

Also on the back panel we see a PS/2 keyboard, 2x eSATA, 1x FireWire, 2x LAN, 8-channel audio (in and out S/PDIF) and another CMOS reset button. 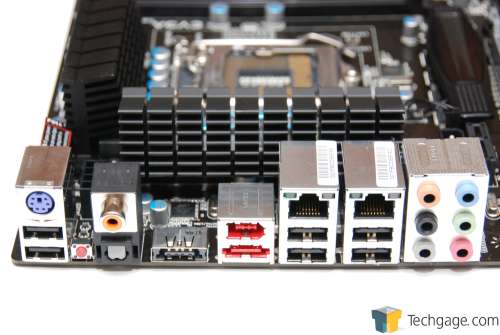 There’s been a fair bit up to this point that helps EVGA stand out from the crowd, but the ECP (EVGA Control Panel) is easily the most noticeable. Quite simply, this is a front-panel module that can be installed into a floppy bay with a little bit of work (unfortunately, no mounting bracket is included), or simply used when the board is outside of a chassis.

This panel has a few duplicate buttons (yet another CMOS reset!), but it has a couple of unique abilities at the same time. First, the three blue buttons. When each one is pushed, ~0.1V will be added to the CPU voltage, so ~0.3V total if all are pushed in. According to the BIOS, pushing all three increased the voltage closer to 0.2V, but this all likely depends on your particular configuration, and the amount of voltage that’s already being applied.

In order to allow overclockers the ultimate in control, there’s also “PCIE Disable” switches which do exactly as you’d expect. Each switch corresponds to a particular PCI-E slot, and if overclockers want to increase their chances of ultra-high clocks, then any of the slots can be disabled on the fly (it could be assumed that most wouldn’t want to disable their primary, for the sake of having video). 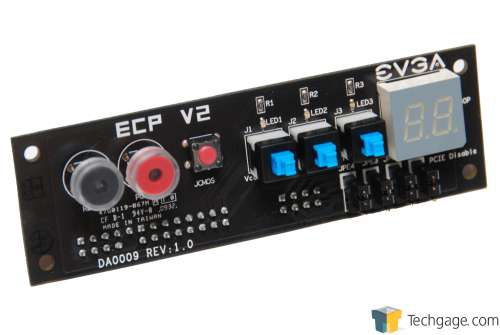 All of the board’s included accessories are laid out below, with the two cables to the absolute right-hand side of the photo being related to this ECP. For basic control, the thick cable has to be used (it looks like a thinner floppy IDE cable), while for PCI-E control, the red/black one must also be used. The larger of the two cables plugs directly into the second ATX chassis connector on the board.

Along with those two cables, EVGA includes six S-ATA, an internal PCI bracket for additional USB and FireWire functionality, two 4-Pin Molex to 2x S-ATA power adapters, the back I/O protector, and of course, the manual and driver DVD. 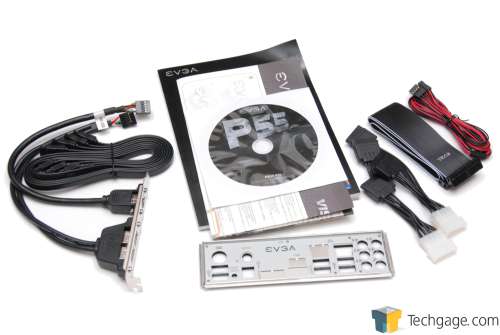 As a whole, I’m quite impressed with the board from an aesthetics, design and packaging standpoint. I’ve been impressed with these things from EVGA in the past, but this board kicks things up a notch. When even the packaging is taken into consideration, you know that a company takes things seriously. Though not pictured, EVGA packages each individual accessory into its own anti-static bag, which is silver on one side, with EVGA’s branding, and see-thru on the other. Yes, this is simple, and for the most part, non-important, but it sure does look good and instill a feeling of quality.

Then there’s the board itself, which includes quite a few minor features that aren’t typically seen on other boards, and it’s quite noticeable. Companies such as ASUS and Gigabyte always have a scroll’s worth of features that their boards include, but most of them are either software or hardware (as in a chip on the board) based. EVGA would rather talk about the features that most people can relate to, and actually see, or even touch, in the case of the ECP 2.

So, the important question… does the BIOS deliver like the rest of the board does?