Well, when all said and done, I didn’t have too much fun overclocking with the EVGA board, for two different reasons. The first was that the process was complicated. The BIOS is fine, but each time I reached an unstable overclock (which is rather easy on this board), I had to use the Clear CMOS button in the back. This isn’t a major issue if you have to use it a few times, but I had to use it dozens of times during my overclocking run, so it became a real hassle fast.

Compare that to an ASUS board, for example, where I rarely have to take such measures. Normally, if an overclock is unstable, the board will still boot up, but at safe settings. EVGA’s board on the other hand, simply won’t boot at all, so I had no choice but to use the quick switch. To complicate things even further, this also meant that I’d either have to set each setting in the BIOS again, or keep reloading a previously-saved profile to build off of, since the Clear CMOS button clears all settings. Frustrating. 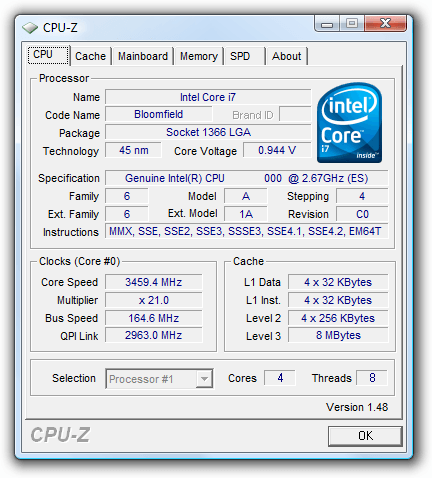 To suck the fun out of overclocking a little bit more, my highest stable Base Clock proved to be 165MHz. But here’s the thing. That overclock requires no voltage increase whatsoever. All I had to do was reset the BIOS to stock settings, bump up the BCLK to 165MHz and then continue on my way. That setting proved 100% stable in our battery of tests, and I’m confident that most people should be able to experience the same.

The odd thing is that voltages didn’t help me at all. I went from modest voltage bumps to all-out retarded voltages, and nothing helped me in the least. At first, I thought it might have been the CPU I was using… perhaps it went bad. But not so, as I installed another Core i7 CPU to the same effect, and returned to our usual ASUS Rampage II Extreme testing board to see the same top-overclock we’ve always had there.

Looking around the web, I have seen a wide variety of overclocks on this board. Some are much more impressive than mine (reaching well past 180MHz), while others have been limited to the ~170MHz area. My overclock was actually the lowest I’ve seen out of the bunch, but that’s a good thing. We could have received a less-than-stellar sample, and we’re fine with that. Experiences will always vary, and that never changes.

I can’t recommend this board for people who want to push their CPU to the limit though. EVGA’s own Classified board is no doubt going to get the job done much, much better. It also costs 50% more than this board though, so that’s not an ideal route to take either. We’ve reviewed other X58 boards that have achieved much higher clocks than 165MHz though, and at the same price. So if overclocking is really what you care about, we recommend you take a look at our past reviews.