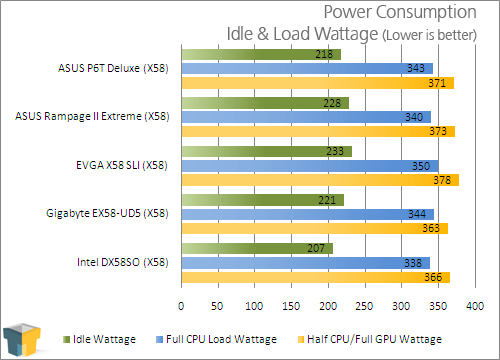 I assumed that with the extra on-board LEDs, the overall power draw would be increased, but that wasn’t really the case, except at idle. At full load, the board was quite comparable to the P6T Deluxe.

When I first received this board, I was excited to install it and get testing underway. Up until that point, I heard nothing but great things about it. After taking a hard look at it though, I have mixed opinions. For the most part, I’d still heartily recommend this board to any gamer looking to add a feature-rich board to their PC, but overclockers would be wise to look elsewhere.

Let’s start with the good. First, the board looks great, from an aesthetics perspective. The chrome heatsinks add a lot to the appeal, and the colors do well to compliment each other. The board’s also feature-packed, including a plentiful number of S-ATA and USB ports, including a flurry of others, such as FireWire, e-SATA, et cetera. The addition of a second LAN port is also appreciated, since this tends to be overlooked by many.

Small things add to the value here as well… some things that other companies tend to skip over. The addition of a BIOS LED readout on the board is a great addition, and it actually helped me out once during the process of reviewing the board. After a BIOS update, the board wouldn’t boot, and it turned out to be a GPU problem. Why exactly the GPU came into play, I’m not sure, but after re-seating and pushing a few buttons with a blank screen, I was able to reboot and get things back to normal. This would have been much more difficult to troubleshoot had the BIOS readout not been there. 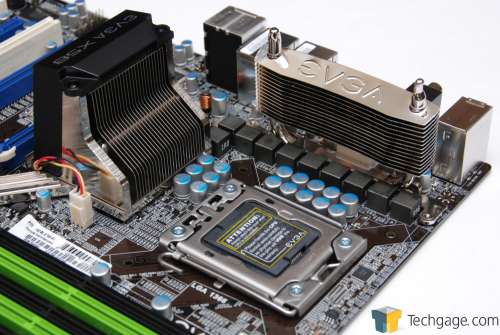 The downsides are few, but may sway a few people from a purchase. We covered overclocking on the previous page, and it’s an important point to make. This board isn’t the best overclocking board we’ve had, and the only board it beat out is Intel’s own DX58SO (which didn’t overclock at all). Aside from overclocking though, the X58 SLI proved extremely stable, so if high-end gaming is in the cards, but overclocking isn’t, you won’t be disappointed.

As explained on the first page to this article, some of the layout choices continue to confuse me. These complaints again are quite minor, but likewise, minor changes could have made a rather significant differences. Having a fan connector closer to the I/O port for a back chassis fan would have been great, because the fan I had couldn’t stretch across to the other side of the board, and really, it shouldn’t have to… that’s ugly. Other than that, the design for the most part is solid, and I have no major complaints.

For a board that’s been out since the i7 launch, EVGA’s own holds up quite well. Again, it’s not for overclockers, but it offers a lot aside from that to make it a great choice for an upgrade.