Gameplay for a title such as F1 2013 is essentially all about the experience of being in control of a racing car. While this sounds like a fairly simple thing to describe in theory, the reality is that it’s really a very difficult thing to articulate because everybody’s experience level is different.

Not only that, but a lot of what driving a vehicle – real or simulated – of any type entails is based on the driver’s sensitivity to all the various stimuli assaulting his or her senses. It’s very possible that some of what I describe in this review might be something that less experienced, or less sensitive, players may not necessarily agree with or even perceive. 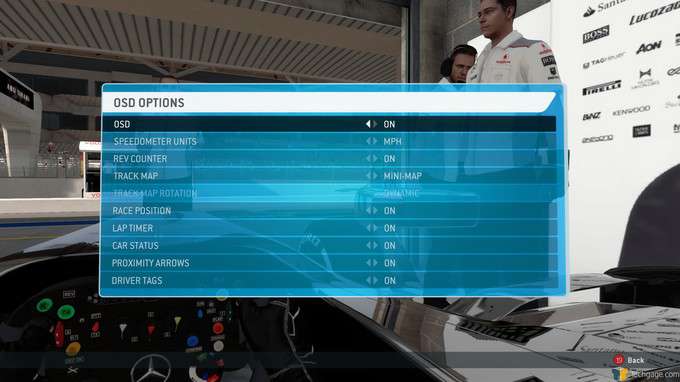 No matter what game mode you play, once you’re on-track it’s basically the same experience. The default camera view is chase, but players who prefer a more realistic experience can select a cockpit view. Also on by default is an on-screen display (OSD) with various data – speed (selectable between metric and Imperial units), a track map, DRS and KERS status, proximity arrows, etc – designed to make the driving experience easier for novices. I turn options like these off because real-life F1 drivers don’t have these to rely on. 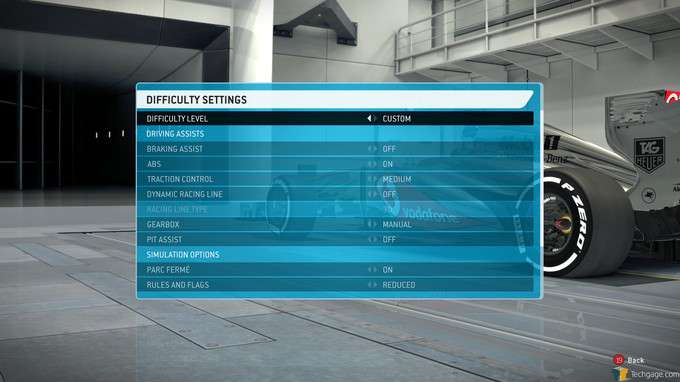 Driver aids such as Driving and Braking Assists, anti-lock braking systems (ABS), traction control, dynamic racing line, and others are also enabled by default as well. With driver aids, players can either select each aid’s effectiveness (high, medium, or low), or turn it off altogether.

In Grand Prix and Career modes, the player can configure race distances, from a length of three laps to 100% race distance. The player can also choose whether or not he would like to experience the entirety of the Grand Prix weekend (full-length Free Practice sessions and full-length knockout-style Qualifying) or truncated versions thereof. The strictness of the enforcement of the regulations can also be tailored to a player’s preferences.

So, clearly F1 2013 can be as easy or as realistic a racing game as a player wants it to be. I like that a lot. But my question is, just how realistic can it be? I mean, I’ve never driven a Formula 1 car myself; I am, however, quite experienced with go-karts (I’ve even tried shifter karts) and have test-driven high performance road cars for BMW and Chevrolet and Ford in years past. Can the game satisfy someone familiar with what high-performance driving really is like? 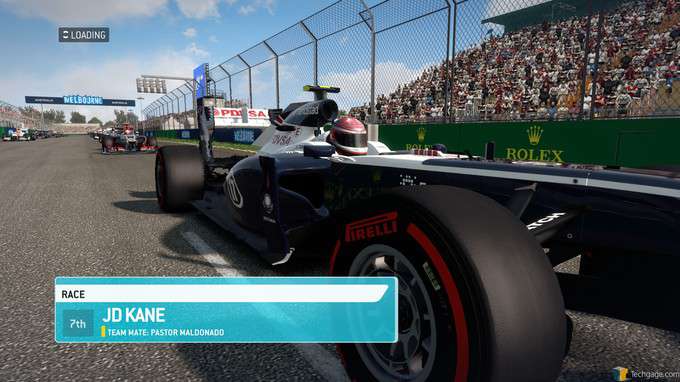 I very much like that each car model is distinct from the rest. The Force India-Mercedes, while fast in a straight line, is not as good in slow corners as the Mercedes-AMG is; both these Mercedes-powered cars feel faster in a straight line than the McLaren-Mercedes. Similarly, although they all run Renault engines, the Williams is a lot slower and handles very poorly compared to the beautiful black and gold Lotus, while the mighty Red Bull is just in another league altogether. In Formula 1, even though the cars may superficially look similar to each other to the untrained eye, there are myriad differences in detail which, in sum, contribute to fairly significant performance variances from car to car. 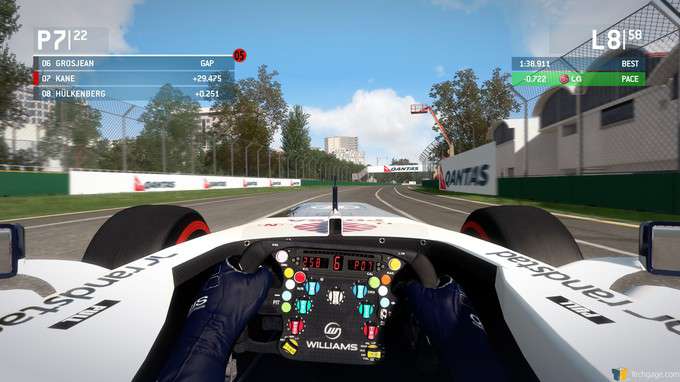 You get much the same story with the classic F1 cars. I drove them all, and I definitely favored certain cars over others because of superior engine and handling characteristics. Strange as it may seem, I really liked the Williams-Judd FW12 because of its superb handling. It felt to me that the Lotus-Renault 98T had the most powerful engine (in real life, it most certainly did: in 1986, Renault’s turbo V6 produced up to around 1300bhp in qualifying trim, and more than 900bhp in race configuration!), but it understeered in slow corners so badly that I couldn’t drive it as well as the FW12. I also quite enjoyed the Williams FW18 and Ferrari F399; these were probably my favorite cars amongst the classics.

(A quick note about the mid-1980s turbocharged cars: I think that Codemasters actually tamed these monsters down, just so anyone can drive them reasonably well. I think that the Lotus 98T and 100T and the Ferrari F1-87 don’t have enough power as depicted; I expected these cars in particular to give the player the sensation of getting a big punch in the back with the onset of turbo boost and maximum power, but they never do. Also missing is the characteristic turbo lag familiar to all drivers of turbocharged cars.)

In real-life Formula 1, a car can be set up to its driver’s requirements. While F1 2013 allows players to set up their cars as well, I am somewhat disappointed in Codemasters’ execution. In truth, the new game does things the way its predecessors (I own every game in the series) have always done. The problem is, car set-up is too simplified. While changing the car’s aerodynamics and spring rates and other settings does result in perceivable changes in the car’s behavior, there seems to be an inadequate correlation to lap times. A case in point: In Career mode, while driving the Williams, I set up the car for increased rear grip to enhance its traction out of corners. Accordingly, this resulted in understeer, especially in the slow corners. That’s all predictable. What surprised me, though, is that there was virtually no difference in my lap times. During free practice, I never drive at 10/10ths since I’m trying to dial in the car’s set-up for the race. It’s therefore amazing to me that the increased understeer did not result in slower lap times.

The circuits are also part of the package, of course, so we must have some commentary about them. Overall, the modelling is very well done: Corner radii are accurate, as are the placement of curbs, barriers, and even advertising hoardings. Familiarity with the tracks then is a huge advantage for a player. But while the tracks are all represented very well on the visual plane, I do wish that some of the more subtle, yet key, details of the tracks are simulated better. Bumps in the surface have a huge effect in how a driver attacks a circuit, as well as how the cars are set up (specifically in finding optimum ride heights, spring rates, and bump damper settings). For example, older circuits such as Monaco, Monza, Spa-Francorchamps, and Interlagos are chock-full of such signature bumps. F1 2013 doesn’t seem to simulate these bumps much, if at all. Great sims simulate bumps through the steering wheel via force feedback (although, it must be said, Codemasters did simulate the bumps over curbs really well, on a par with the best racing sims I’ve played). The only track where I felt Codemasters did a fair job at representing bumps is Brands Hatch. 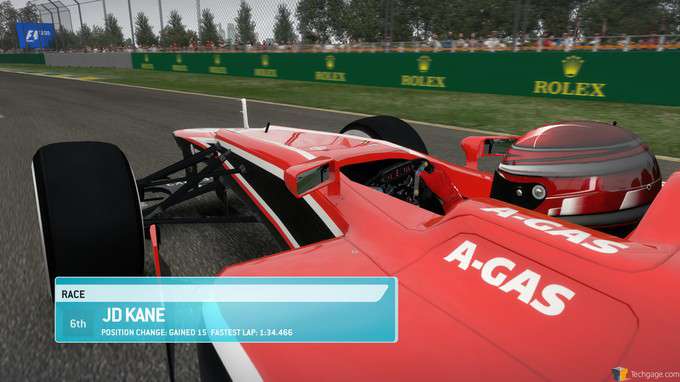 The very best racing games immerse the player into the game world (which is true of all games, actually); in racing games, the player really feels like he’s connected to the car as it’s hurtling down the track. F1 2013, as with its older kin, does this, but only up to a point. Even with all driver aids turned off (nothing dampens feel for a car more than driver aids), there is still a certain degree of disconnection between the player, the car, and the circuit. This is especially true when force feedback is not enabled or available. I am still amazed that Codemasters apparently thought that disabling force feedback is the correct default setting even when a Logitech G25 is plugged into the host PC. Consequently, my first few sessions driving the car just felt downright weird. Enabling force feedback helped cure things, but unfortunately not to the degree I had hoped for. To me it seems that Codemasters designed the game so that a player relies mostly on visual feedback, and not so much on simulating the more tactile facets of driving a racing car (which is primarily what force feedback endows).

Sound effects also contribute much to the game’s immersiveness. F1 2013 does a good job with this, particularly with the modern cars and the ambient sounds at the race circuit. Nostalgic fans will enjoy hearing Murray Walker’s short commentaries in the Classics mode, no doubt. Your race engineer’s radio traffic is also quite well done. Where I do feel a little bit let down, though, is with some of the classic cars’ engine sounds. In particular, the turbocharged cars (the two Lotuses, the Ferrari F1-87) lack the characteristic whoosh-spit of turbo wastegates and pop-off valves discharging as you lift from the throttle. Also, the Ferrari F92A doesn’t sound anything like its real-life counterpart. The early-1990s Ferraris (up until 1995) had V12s that sang with a wonderful, sonorous banshee wail as they soared up the rev range. F1 2013‘s F92A didn’t sound too much like a V12, lacking the high-pitched wail so characteristic of Ferrari’s V12s of that era. 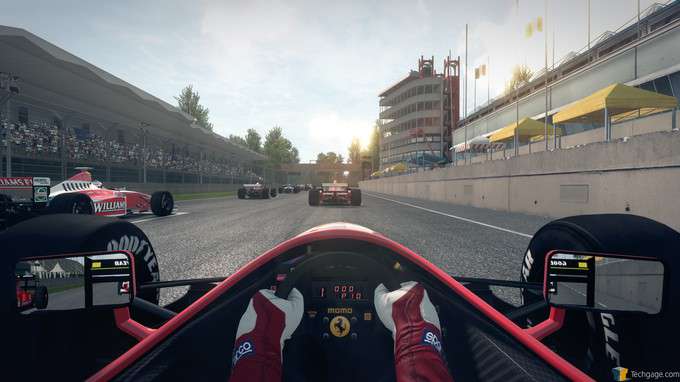 AI (artificial intelligence) is handled very well. The CPU-controlled cars react predictably; this is a very good thing since it makes fighting against them on-track realistic and highly enjoyable. The AI knows how to attack you without intentionally turfing you off the circuit; it also knows how to defend against your attempts to overtake. AI is one of the trickiest things to do in a racing game, and Codemasters is quite good at it.

One really huge annoyance to me is the lack of clutch control. This has been true of every F1 game Codemasters has produced, and this is one evolutionary step I’d hoped F1 2013 would make. Precise control of the clutch is really useful at race starts; not being able to control the clutch at starts always results in either too much wheelspin or Mark Webber-like turtle starts with me. Frustrating and annoying, for sure.

In terms of the graphics, well, Codemasters set the standard with its first F1 game; F1 2013 is just more of the same, but better and more refined. As noted before, the circuits are represented very well. The cars are, as well, particularly the modern ones. Where the game slightly trips up is in its depiction of the classic cars. In particular, dashboards are not historically accurate. Specifically, many of the older cars only had tachometers; they didn’t have the modern system of multi-colored LEDs to indicate when to change gear. The cars from 1996 and onwards had these shift LEDs, but not the ones from the 1980s-early 1990s. While it’s great the older cars did have a tachometer gauge, having the shift LEDs also present kind of detracted from the historical vibe Codemasters was trying to latch on to.

With gameplay thoroughly covered, let’s race on over to the final thoughts.