Helping to make each race as exciting as possible, dynamic weather has made a return here and can make or brake (pun intended) how your race could go. Prior to racing at a new location, your manager will send you an e-mail noting the weather to expect during all three race sessions. This ranges from clear to light cloud to overcast to light rain to torrential downpour. Err, “heavy rain”.

Living up to its “dynamic” name, the weather can change over the course of lengthier races, moving from dry to wet or vice versa. This is one aspect of the game that made a fool of me more than once. Imagine scoring an unbeatable lap in the qualifier in the heavy rain and then skipping to the race – only to wind up in 18th place because it became sunny before the qualifier was over. Yes, it can happen.

Speaking of rain, there’s just no forgiveness from the Gods in this game. If a practice or qualifier winds up being held on a heavy rain day, you are going to be in for one heck of a challenge. Light rain days can be managed depending on the track, but NÃ¼rburgring on a day where you are hit by the volume of your car in rain every ten seconds? That’s challenging. 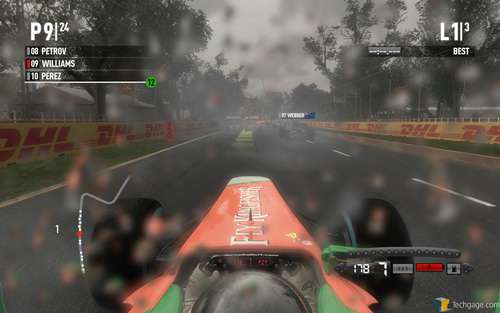 Driving on what seems like ice isn’t the best part, though. That’s slipstreaming another driver, or being near another one at all. This is where it pays to know each and every track very well, because there will be points during a race where you will have so much water splashing up at you that it’s impossible in the truest sense of the word to see up ahead.

Speaking of challenging, in the real F1 2011 season both KERS and DRS rule changes have had an interesting effect on some races, and for the most part it seems most are in favor of retaining both for the future. In the F1 2011 game, you can expect both to add another element of strategy, as either of them, or both used in strategic conjunction, can help make you a winner when you thought all was lost.

KERS (Kinetic Energy Recovery Systems) in the simplest terms helps recover the kinetic energy found in the waste heat generated while breaking. This is then converted to power and stored to a battery, and when required, the power is passed back to the engine giving the car a temporary ~80BHP boost. As per official rules, KERS can be used at any point during a race. 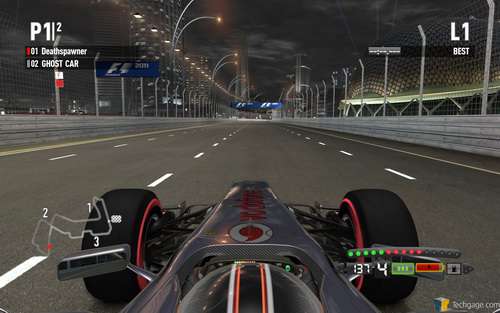 In the 2011 F1 season, DRS (Drag Reduction System) refers to the opening of a rear wing that will help reduce drag. Unlike KERS, the rules of DRS are strict and take a while to nail down. In practice and qualifier races, DRS is unrestricted, but in an actual race, it can only be used at pre-defined points during a track and then only if you are within 1 second of the person in front of you. Out of a successful slipstream, DRS can increase your car’s speed up to 10KM/h.

Mastering both KERS and DRS is challenging, and could take an entire season in the game to understand the best times to use either. KERS is recommended off the gate to help you get to the front of the pack as quick as possible (and perhaps avoid blocking penalties), but since it decreases a lap time by a mere 0.3s, another good use is corner overtaking. 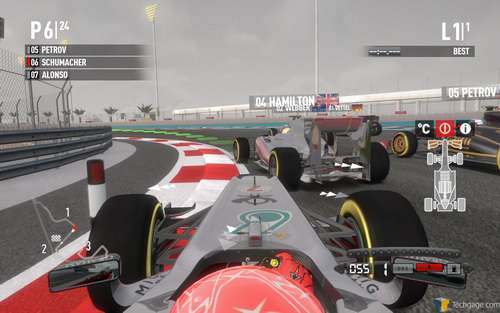 Overall, the game’s mechanics are quite good. This is helped by the fact that Codemasters had far greater access to the F1 teams this time around, which in turn increases realism and also difficulty. At the best of times, F1 2011 is a challenging game, and at the worst of times – well, when is the last time you threw a controller at the wall?

Graphics-wise, it’s not often when a racing game underwhelms. As long as the cars and tracks look good, all is kosher. Well, that’s for someone who’s not fussy, at least. Given that we just moved from F1 2010 to F1 2011, I expected more improvements to the graphics than what we saw.

The game uses the same engine as Dirt 3, EGO Engine 2.0, and for the most part suffers the same sort of “console-esque” issues. The crowd in F1 2011 isn’t often seen up close, but when you do see them, most people look similar and have flat-textured faces. In the distance, like from the pit, you’ll see people’s arms look like elongated triangles – an obvious shortcut made by the developer. Members of the press and the mechanics are often seen up close as well though, and neither of those look that impressive. As seen in the video the image below, the models are not that detailed; and in fact they look like the sort of models you would expect from a much older game. 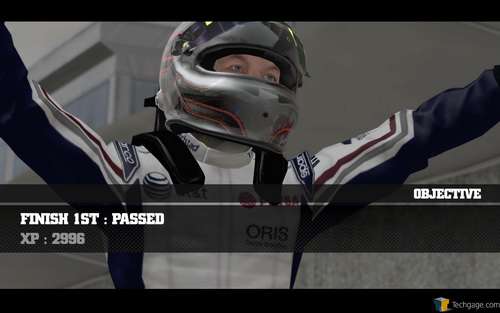 Those niggles aside, the cars and tracks look great, so that’s a major plus. The same can be said about the audio. Your pit manager sounds great and often provides useful information, and the cars sound like chainsaws just as they should. The audio stuck me during heavy rain races, because it helped make it feel like I was really racing in such uncomfortable weather.

F1 2011 can’t be called a “major” update to the series, but there’s enough substance here that would warrant an upgrade – or, in the case of an F1 enthusiast who hasn’t picked up a game in a while, it’s a no-brainer. All of the included tracks are exciting to race on, just like in the real F1, and with the introduction of KERS and DRS, an entirely new dynamic is brought to the races. The game is just as challenging as ever, if not more so, and given the career mode can span 100 hours or more, there’s a lot of value wrapped in here.