With each new F1 title Codemasters releases, we’re promised improved mechanics, graphics and audio, new must-have features and, generally speaking, the best F1 experience possible in a video game. The latest release also promises to be more “accessible” to new racers, so let’s strap in and see if F1 2012 hits the mark.

Developers of annually-released sports titles inherit rather unique challenges when it comes to following-up to the previous game. What can be done when much of the game remains the same? Improving the game mechanics is a given, adding game modes can help and of course, updated graphics and audio is rarely considered a bad thing. Let’s face it – sports titles cost just as much as other games that feature 100% fresh content, so developers like Codemasters must work hard to coax you into an upgrade.

Fortunately, the company did succeed at this challenge with F1 2011. Will we be able to claim the same about F1 2012 by the end of this review? There’s only one way to find out – let’s get on with it.

Last year’s biggest introductions included KERS, DRS and R&D; each of those has made a return here with no modification. Career-wise, F1 2012 follows the current season to a T, which means it has 20 races, kicks off with the beautiful Albert Park in Australia, with Bahrain International, Hockenheimring and the brand-new Circuit of the Americas replacing Istanbul Park and Nürburgring. 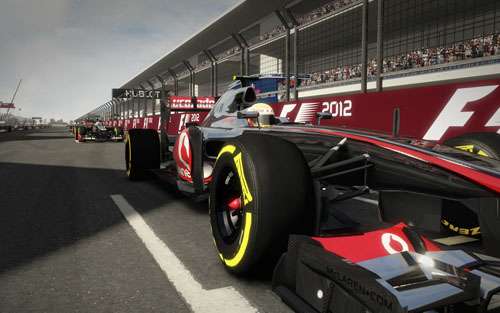 The F1 series is without a doubt one of the most challenging around, and as such, newbies might become overwhelmed with the difficulty and shelve the game before long. To help F1 2012 become more accessible, Codemasters has added a “Young Drivers Test” mode that explains in good detail about some things you need to know – at the very least, how to handle a hairpin. Split into two “days”, a player can complete this mode in about 15 – 20 minutes. To me, this mode is largely unneeded and doesn’t help out too much. Most of what you’re told is common-sense, and what improves you in this game is practice, not tests that last 15 seconds.

The game does add two other modes that are pretty awesome. “Champions” allows you to tackle six different scenarios, always involving beating out a racing legend. You start off having to overtake the Iceman at Spa, and ultimately go head-to-head with Schumacher. You’ll have a limited number of laps to succeed at any of these challenges, and all of them start you off near the end of a race.

The last new mode is my favorite, “Season Challenge”. Realizing that some might like to complete an entire circuit in an afternoon, Codemasters has availed us the option – and this is very much abbreviated. There are 10 5-lap races total, one-shot qualifiers and no practice. Whereas your goal in the normal career mode is to simply keep ahead of your teammate, in Season Challenge you must choose a rival and finish ahead of him more than he does you. While the progression in this mode is very accelerated, you still have e-mail to read through and R&D paths to choose. 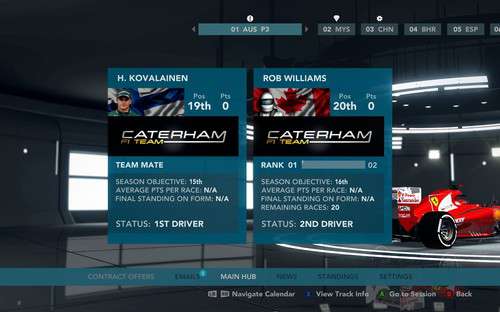 Another notable and appreciated addition is that prior to beginning a race, you can watch a video narrated by Anthony Davidson that explains in great detail how to handle every single step of the race. This is about as good of a coaching as you can get – the only thing that could improve it further is if you were narrated while actually racing the track.

With these additions comes a couple of feature removals. F1 2011 added a fair bit of realism to your career, and F1 2012 takes it all away. You’ll no longer be located in your paddock between races, and David Croft will no longer ask you the same questions after every race. I do miss the removal of the paddocks, but your tastes may favor it.

Paddocks might be no more, but what results is a highly-refined UI. Seriously – this is the best-looking UI I’ve ever seen in a racing game. It’s classy, simple to navigate and isn’t all over the place like the menus in some of Codemasters’ DiRT games. The game configuration can be tackled under the “My F1” section, which largely remains the same from F1 2011. There’s no specific DX11 mode to specify this year, however, but if you have a capable card, you can consider DX11 as good as active.

Graphics-wise, as the shots below can attest, not too much has changed. Cars are as gorgeous as ever, though decals are again not so sharp (a pet peeve, especially when you are able to view them reletively close in cockpit / rear-view cameras). If anything stands out, it’s the trees. They simply look more realistic in F1 2012. Reflections have been slightly improved as well, noticeable most on a track like Spa thanks to all of the trees that will reflect off the car. 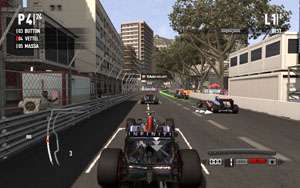 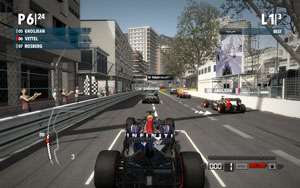 As I mentioned before, the F1 series isn’t exactly friendly to newbies. Though not a simulator, it’s about as close as we can get. While I found F1 2011 to be difficult, requiring a lot of practice to get “good” at, F1 2012 is even harder. You need to be more careful about taking corners, as it’s much easier to understeer. If you don’t brake at the right time, usually well before the turn, you’re going onto the grass, dirt, gravel or what-have-you. Adding to this pain, the penalty for running off the side has been increased as well. You might be on the grass, but it’ll feel like hot tar until you get back to the road.

These changes are likely a very good thing, as they feel more realistic. But for those who don’t want a pro-level experience, it makes F1 2012 difficult for newer players to get into. Versus the previous game, the same tracks / cars / car setups / configuration will add at least two seconds to each of my personal laps. Though difficult to pin-point, I assume this is a direct result of the changed mechanics. But adding to it all, coming in first is extremely difficult for someone who’s not experienced with the game. I regularly placed first in a career in F1 2011, but have yet to pull it off in F1 2012.