With each new F1 title Codemasters releases, we’re promised improved mechanics, graphics and audio, new must-have features and, generally speaking, the best F1 experience possible in a video game. The latest release also promises to be more “accessible” to new racers, so let’s strap in and see if F1 2012 hits the mark.

This leads me to a complaint that any “pro” F1 gamer will disagree with (as they already believe Codemasters is catering to newbies). The regular career mode doesn’t have a difficulty level, but the Season Challenge does. There, “Easy” is most certainly not easy. From first place to last, there’s at most a 4 or 5 second delta. This is accurate to a real F1 season, but for an inexperienced racer? They’ll see more 24 than Jeff Gordon.

Adjustments could be made to the game to cater to newer players but not affect the pros. It’d be best to truly ease people into it, if you will. While the AI does manage to mess up their own laps on occasion, coming anywhere in the top 12 on some tracks requires some serious skill or abuse of the restart button.

But I digress. While the difficulty has been heightened, there are a slew of other improvements to help make this the best F1 game ever released. Some of the camera modes, for example, have been tweaked. Cockpit view has a wider FOV, and the result is fantastic. So is the backwards view, where you can quickly check on your wings. 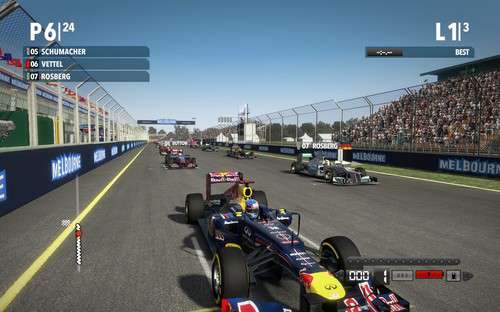 Other changes involve your engine and tires, and more than ever, you’ll need to pay attention to your configuration and strategies. I managed to blow out my tires twice over the weekend on short races and kill my engine from switching gears too quickly – neither of which I ever accomplished in F1 2010. On the upside – maybe – I found 2012 to be far more lenient with cutting corners. Corners I cut that I felt I should have been penalized for, I wasn’t.

A change I’d be remiss to mention is the addition of fuel added to your race strategy. You can choose whether to be cautious or aggressive with your fuel supply, which complements the already-existing strategy of choosing when to take pit stops and which tires to use where and when.

Finally, while not a major change, much like DiRT: Showdown F1 2012 gets off of Games for Windows Live and moves into Codemasters’ own Racenet for online action. For a multitude of reasons, I could certainly live without GfWL, so this becomes a simple yet seriously appreciated move. 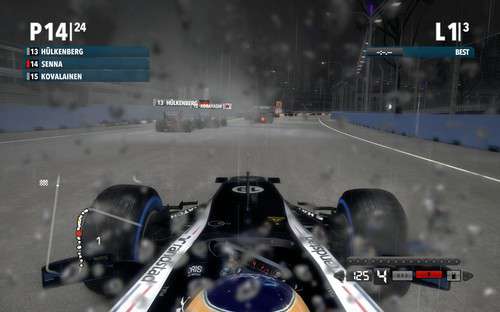 A common request from fans to Codemasters is to put a realistic pit stop in, where you are in control. Unfortunately, this didn’t happen in F1 2012, and its implementation is much the same as last year. You can drive as fast as you want into pit lane and then the game will take over, put you exactly where you need to be and then hold your hand until you reach the track. For those who like a richer F1 experience, this is very disappointing. Making matters worse, Codemasters decided to cinematize it more than last year’s game, which just seems out-of-place in the middle of a race.

When all said and done, is F1 2012 a worthy successor to the previous title? Yes, absolutely. There are of course some downsides that seem to carry from game to game, such as the lack of manual pit stops, but overall, there’s quite a bit added here that will give you extra things to play around with, add strategy to your long-haul races and, if you don’t mind re-programming a part of your brain, learning how to best handle understeer-baiting corners.

The best way to sum up F1 2012 is that it’s a fine-tuning of the series. Everything seems to have been given a tweak, and the end-result makes this game better than last year’s. Then there’s new modes, including challenging scenario races, and overall, most everything feels right. You will have to plan on re-learing some of your race strategies, so whether or not that’s considered a good thing will depend entirely on your opinion of things. I am confident most will enjoy all of these changes / additions, even if some of them get ignored. 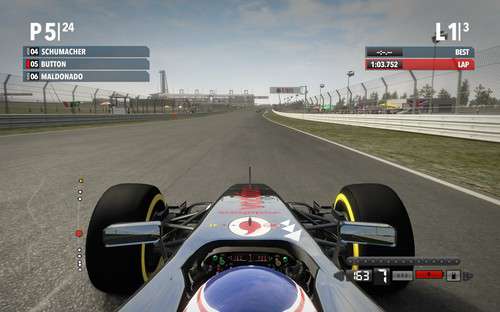 As for the game becoming more “accessible” to newer gamers, I call bullocks on that. The “Young Driver Test” mode is truly simple, and it’s basically the entire reason Codemasters has used the word “accessible” at all. A simple 15 minute mode doesn’t do much to prepare someone for the challenges that await them.