by Jamie Fletcher on July 3, 2015 in Peripherals

CHERRY may be best known for its keyboard switches, but it makes its own boards, too. Not just to take advantage of its own switches, but also to showcase new tech for other manufacturers. The MX Board 6.0 is just such a keyboard, showing off some of the latest tech behind the humble Human Interface Device.

Gamers are stir-crazy over response times, from 1ms displays, 1000Hz poll rate peripherals, linear switches, and N-key rollovers. Short of a brain-machine interface, we’re pretty much at the limit of perceptually measurable response times. However, there are other areas in the electrical chain that can have response times reduced, which is what the MX Board 6.0 hopes to achieve.

Announced back at CES 2015, CHERRY showcased a new board design that effectively eliminates any remaining delays prevalent in the humble keyboard (excluding the USB protocol itself). The idea is rather simple and very low tech, switching from digital to analog input, something it calls Real Key.

Specifics are rather vague and the introductory video is somewhat misleading. The main benefit of the Real Key technology is something called debounce reduction. When a key is pressed, it’s not completely smooth, and it’s possible for intermittent signal loss (or voltage reduction), resulting in multiple key presses being registered in a very short time-frame. Debounce is a filter of sorts that sets a threshold for activation of the key. According to CHERRY, this can be as high as 20ms… which if I’m honest, seems a bit too high, but this depends on the controller and how aggressive the filtering is.

CHERRY’s Real Key analog system reports a debounce time of just 1ms, effectively offloading the micro-controller calculations (waiting to confirm key activation), saving a few milliseconds in the process. The specifics as to how this is done are not detailed anywhere, but if I had to guess, ‘analog’ could just mean an RC (resistor capacitor) filter to smooth out the contact – think anti-alisaing for electronics.

In addition to this debounce, each key is supposedly connected directly to the controller, there by eliminating the need for grid/matrix scanning; key rollover and ghosting just wouldn’t happen. How this is achieved exactly, is unknown. I doubt that the controller would have a pin for each key, as the tracing through the PCB would be impractical. Also, if an ADC (Analog to Digital Converter) was used, that’s still technically digital scanning (even though the updates would be in the KHz range). My electronics knowledge isn’t very advanced, so this is purely conjecture.

The MX Board 6.0 is an aluminum shelled, 108/109-key layout, half-height mechanical, making exclusive use of CHERRY MX Red switches. Yup, exclusive reds, no other variants at this time. This is effectively a showcase for the most ‘responsive’ keyboard out there. For those that are unfamiliar with red switches, they are linear types with no click or tactile feedback, with an incredibly light touch of 45n (effectively 45 grams). 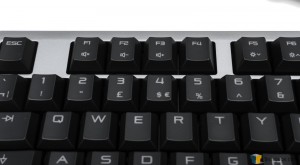 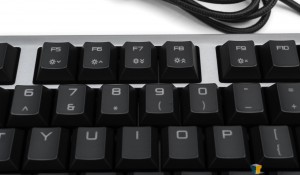 There are no macro keys, not even a software suite (thankfully). There are function modified media keys across the top row for multimedia playback, volume and backlight brightness. Strangely, there are 5 keys dedicated the the backlight, including an on/off, 10% brightness adjust, and a pair of fine-control backlight brightness adjusters. These fine control buttons work on 1% increments. Not entirely necessary I think, but there if you need them. 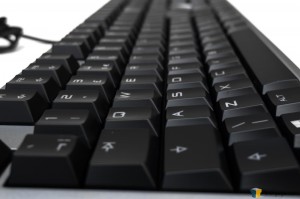 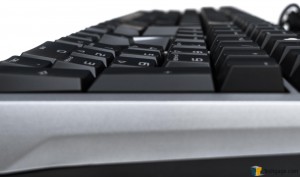 There is some ergonomic contouring going on too, rather than a straight slope. The home row is about 2-3mm lower than the adjacent rows. This isn’t really the sort of difference that you can feel easily, so whether that’s good ergonomics or a wasted feature, I’m undecided on. However, look at the numpad, and you can see three distinct tiers. The numlock row being the highest, 7-9 being a step down, then a horizontal slope with the rest. 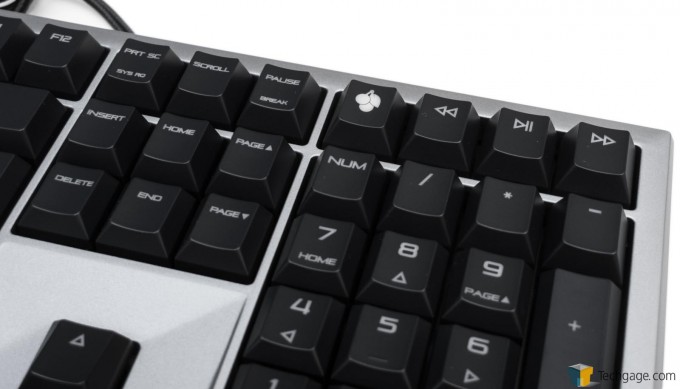 The top right corner of the board holds the media playback keys and a cherry logo key. This is the Windows-key lock enabler. However, reading the manual, it does a little more than just affect the Win-key; it also disables Alt-F4, Alt-Tab and Ctrl-Alt-Del. Why it needs to do that is beyond me – if anything, I’d rather it didn’t. Since there is no software, this can not be disabled. 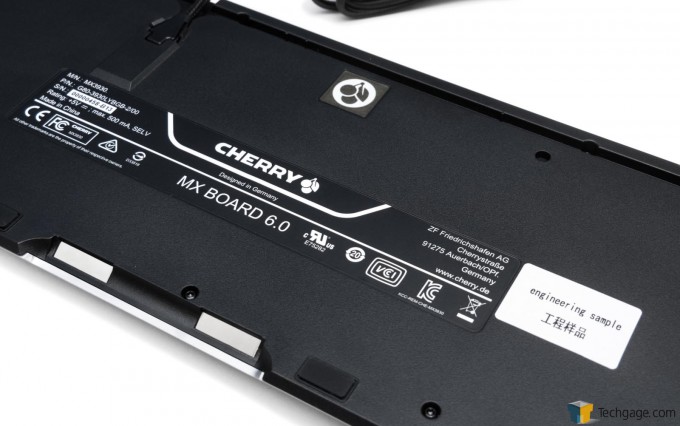 Looking at the backside, you can see that the body is not quite full aluminum. Not to worry though, it’s only the back plate that’s plastic; the PCB is actually mounted to the aluminum frame. If you look at the cable inlet, you’ll notice what looks like a plug. Disappointingly, it’s more of a protective cover… although, we’ll come back to that a little later.

I will point out now, if you haven’t noticed the sticker already, that this keyboard is an engineering sample. There might be slight variations with the final consumer version, but this is incredible unlikely. I’d mostly expect just minor firmware changes at this point. 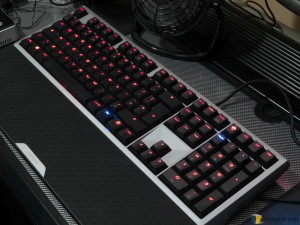 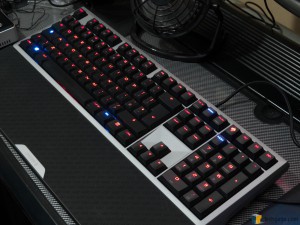 Finally, we have the backlighting. Red may not be for everyone, but I prefer it over blue. I often find that blue backlights cause eye strain, even when the brightness is reduced. What’s interesting is the blue backlights as indicators for CAPS, Scroll, Num and Win keys, rather than the more usual 3-point indicator set. 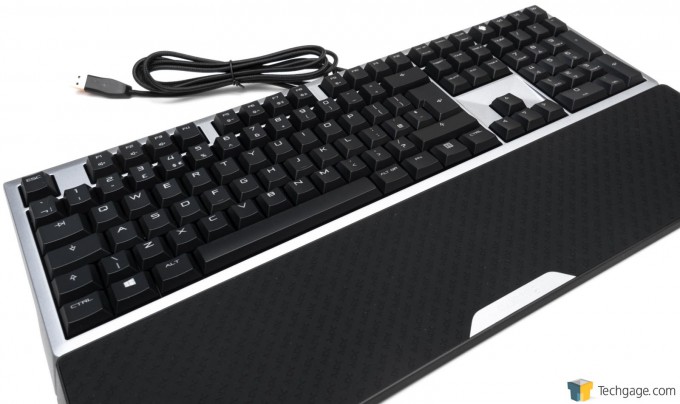 There is a large, rubberized wrist rest that magnetically attaches to the main board. I will warn you that it does have that ‘fresh rubber’ smell, and it will take a few days to disperse. The rubber is reasonably soft and a real dust magnet. It’s not sticky, but dust does love to cling to it.

Curiosity got the better of me, so I decided to go against my better judgment and… try to take the board apart. You see, I want to know if there is some kind of monolithic chip with 150+ pins, sitting proud above a green sea of solder-mask, or if it’s littered with little capacitors behind the switch contacts.

The board is held together by a bunch of torx screws around the perimeter. There is one hidden underneath the glittering cherry logo, which doubles up as a warranty seal – so be warned (although it’s not marked as a seal, it leaves a pattern of glitter behind). With screws removed, we see the backside of the board. 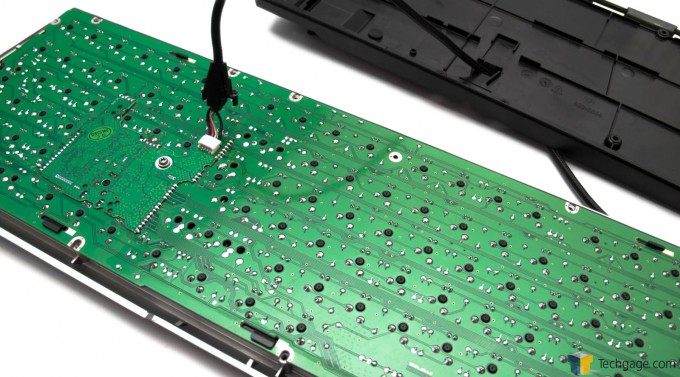 OK, I am slightly disappointed. It looks like a fairly standard keyboard PCB, marked as version 2.4.6. The micro-controller is likely on the other side of the stacked and soldered PCB the cable attaches too, but there is no way to remove it without desoldering. In addition, there is a second set of torx screws that keep the PCB attached to the aluminum frame. Unfortunately, these screws are super small, and none of my standard set of torx bits would fit, so the tear-down has to end there. 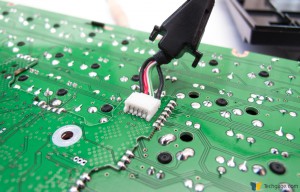 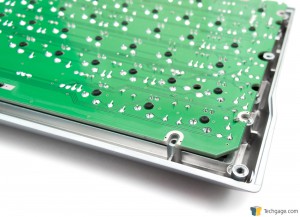 There is some good news. The cable is not soldered to the board, so should you suffer cable failure after the warranty, it will be quite simple to replace. Strain relief is a little odd, in that it’s tied to a plastic wrap that’s supported by the back panel, so if you yank the cable, you could pull it out of the the socket if you’re not careful. It should be simple enough to re-attach, if you haven’t pulled the housing off the pins or cracked the solder.

While not clearly visible, the aluminum frame is very substantial, between 3-5mm thick, depending where you measure. It’s one very large, solid chunk of aluminum, and this probably where most of the price went. It’s not super heavy, but it’s unlikely to float across your desk. 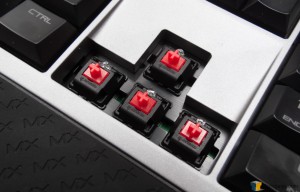 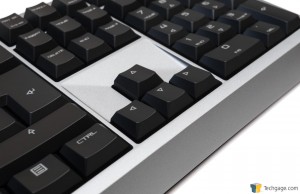 The MX Reds used on the board are the gold cross-contact variety capable of 50-million plus presses, using the standard + mount for key-caps. They feel like any red should, but backed up with a very solid PCB. There is no give to the board, no hollowness, even bottoming out is not super loud either; but to kill any remaining sound, you could still install a set of o-rings.

If I am honest, there is a fair bit of marketing being thrown at this board. The reality is, you are not going to notice the response time. There is still a lot to like about the MX 6.0, as it’s a collection of subtleties and rugged engineering. It’s heavy, solid, precise, accurate and incredibly well-built. There is novelty in the indicator lights, and the ergonomics are not outrageous either. Media keys keep it modern without the complexities of a superfluous software stack.

The MX Board 6.0 is not meant to be targeted at gamers (despite the red backlight, red switches and novel indicators), but rather at ‘professionals’. While it’s meant to be a typist keyboard as well, why the focus on response time and the use of MX Red switches? Typing is typically a tactile experience, while gamers would be after the responsiveness. It feels lost between the two worlds.

The font used has a sort of edgy ‘gamer’ feel to it, but I actually quite like it, as it’s easy to read, even with the backlight on full. Compare this to the light-bleeding font of the Tesoro Excalibur recently reviewed, it’s a welcome change.

I was having some minor issues with the FN key to begin with too – serves me right for not reading the manual. The default behaviors for it is toggled on (it has a blue light), which means the entire F-row will behave in FN mode, so backlight brightness and volume control. You have to toggle the FN key off by pressing CTRL-FN. This toggles the FN key off and back to red. CTRL-FN is just a toggle, so you can still use the FN key normally while it’s off.

Marketing hype aside, the CHERRY MX Board 6.0 is a solid piece of German engineering. It does seem to have a bit of an identity crisis, appealing to gamers but targeted to professionals, and let’s not forget the rather extreme $219 price tag.

I love the frame, and with the backlight toned back, it’s a very sleek design. The lack of configuration, such as the behavior of the Win-Lock, is a little irritating, but it’s something I can live with. The keyboard is good, but not $219 good. If the price were to drop down to $180 or less, then that would bring it into more acceptable territory, although $150-$160 would put it more in-line with other premium keyboards. I don’t think the heavy metal frame and vague Real Key tech justify the price.