One of the greatest things about a test bench is that installing hardware tends to be super-easy. In most cases (pun not intended), the only things that need to be secured to the test bench for anything like a permanent basis are the power supply and maybe the motherboard. Having said that, this is not a universal immutable truth (I know of at least one test bench where there is no way to mount the PSU on a permanent basis, but that’s neither here nor there).

At any rate, let’s see how easy it is to install a system in the Puget Systems Test Bench.

If you’re like me, the I/O shield is the first thing I install into a chassis. After this comes the motherboard. With an open test bench the job is as easy as lining up the motherboard with the standoffs, then gently laying the board down. 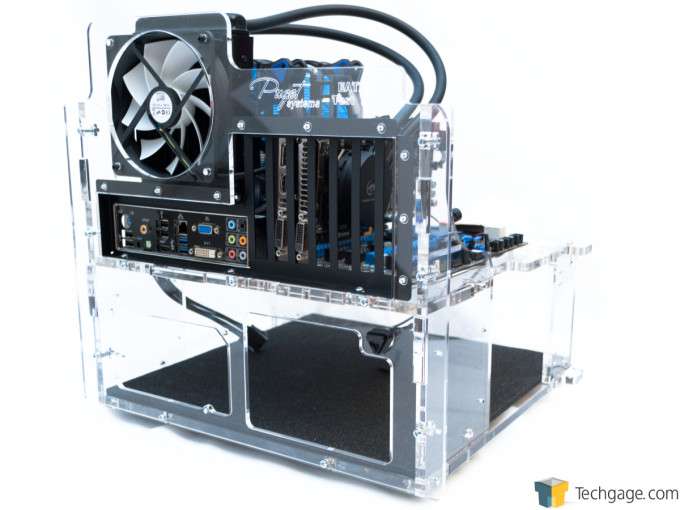 All told, it takes a lot more time to disconnect all the cables and removing all the screws from a previous installation than it is to install both the I/O shield and the motherboard onto the Puget Systems Test Bench. It took all of a minute to line up the motherboard with the pegs on the four corner standoffs as well as the openings in the I/O shield, plus another thirty seconds to thread the power switch cable and plug it into the front panel header. Fifteen seconds elapsed before I installed the video card into its PCIe slot, and another minute to install the radiator + fan into its position on the front panel. That means it takes around three and a half minutes or thereabouts to install the motherboard and most of its main accoutrements onto the test bench.

Next on the task list is installing the power supply unit, then connecting all the power cables as needed. 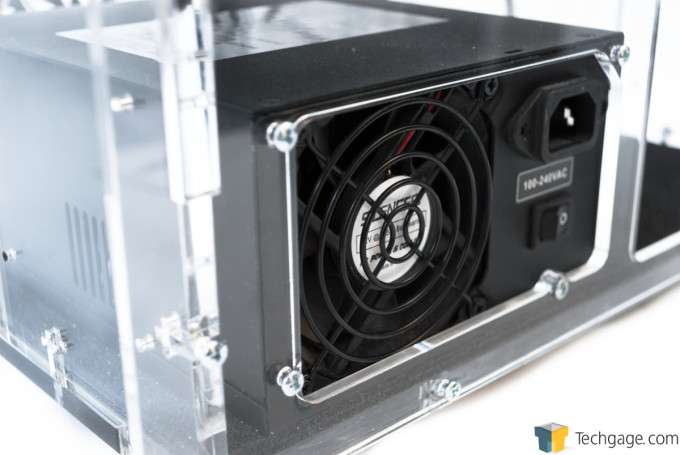 PSU installation is a breeze as well. All it takes is lining up the screw holes, then using the correct screws (which are included, as well as helpfully called out in the instructions) to fasten the unit in place. Then it’s just a matter of hooking up the necessary cables to their correct connectors. Time elapsed for this stage of the assembly: 1 minute for PSU installation, plus another minute for five power connectors (8-pin CPU, dual 6-pin for GPU, 24-pin for motherboard, and one Molex 4-pin for the GPU cooler’s water pump). Of course, if you wanted to, you could spend a lot more time to fuss with your cable management; however, this is purely an optional step (and something you can defer to until the end stages of your build).

A note about PSU installation: The Test Bench has only one set of screw holes for hard-mounting your PSU (all other PC chassis I’ve seen allow PSU mounting to be reversible, so they have eight screw holes). If, on the very rare chance your PSU’s own screw holes line up in such a way that its fan is facing the floor, it would be a bad idea to hard-mount it to the Test Bench. Always keep your PSU’s fan open to the air so it won’t overheat and kill itself (and, likely, the rest of your PC).

At this stage, I install any storage devices needed. You may have noticed that the Puget Systems Test Bench doesn’t have any drive cages or bays or anything of that ilk. On many test benches, storage devices such as SSDs, HDDs and optical drives are meant to be placed on the floor of the test bench. The foam lining on this one absorbs all vibrations these devices create, so I commend Puget Systems for its attention to detail. However, the company does include appropriate screws and mounting positions on the acrylic panels to install storage devices on a more permanent basis. But because I’m building this system as if it were a “classical” test bench – i.e., one used by a hardware tester who needs to swap components in and out quickly – I didn’t bother hard-mounting the SSD. 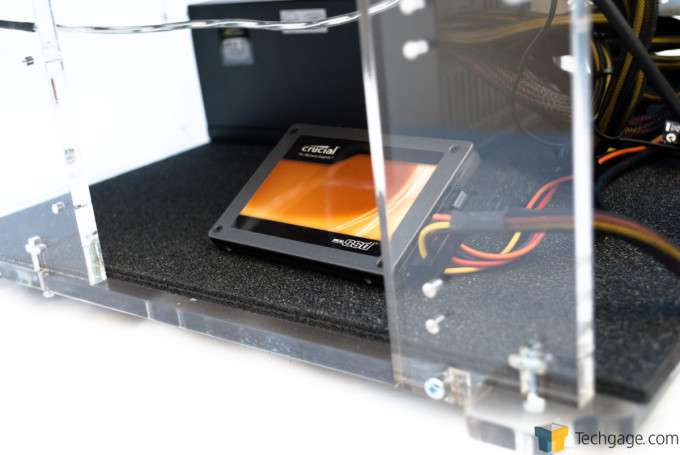 For my machine it’s as simple as plugging in the power and data cables to my Crucial C300 SSD, then laying the drive down on the foam lining. If you’re a hardware tester and you need to access components quickly for installation and replacement, this is where a test bench’s fundamental simplicity really makes sense. 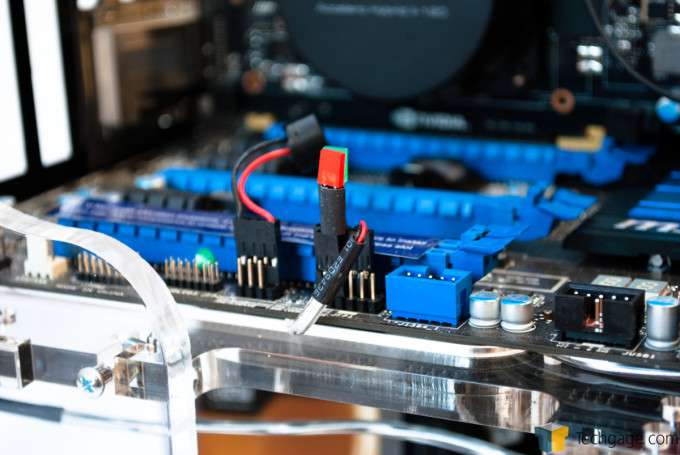 As an optional but useful last step, you can plug in the provided Power and HDD LEDs into their pins on your motherboard’s front I/O pin cluster.

At this point, the test system is fully installed onto the Puget Systems Test Bench. It’s time to do some performance testing, after which we’ll have some final thoughts.