With mass storage being available at reasonable prices, the desire to build home servers, NAS boxes and so forth has never been stronger. Some might choose the pre-built NAS route, but for those pro-DIY, Fractal Design has its Array R2. Interested in a mini-ITX chassis that can support up to 6 hard drives and 1 SSD? Read on.

Testing the cooling capacity of the Array R2 was done in a similar fashion to other chassis reviews I have done over the years. For the R2, I started a pair of instances of CPU Burn-in (one for each core). While an older app, it has always served me well when trying to stress a CPU to get a temperature reading under load. As always, the procedure is me running it for a set amount of time; in this case, 30 minutes. At the tail end of the run, I record the temperatures of the CPU using Real Temp. The two cores were then averaged.

While not stellar, the temperatures are well within the Intel-specified thermal envelope, and keep in mind, this was with the tiny stock fan that came with the CPU. I would say that given the limited capabilities of the stock Intel heatsink, the Array R2 is more than able to feed cooler outside air, allowing even a minimal cooling solution to work at a reasonable level.

The hard drives faired just as well, never fluctuating more than a couple of degrees in either direction. The two WD Green drives hovered around 42°C during testing and the WD 640 Caviar was a tick higher at 44°C. The drives certainly benefitted from the 140mm fan at the front of the Array R2 and never ventured anywhere near dangerous territory. 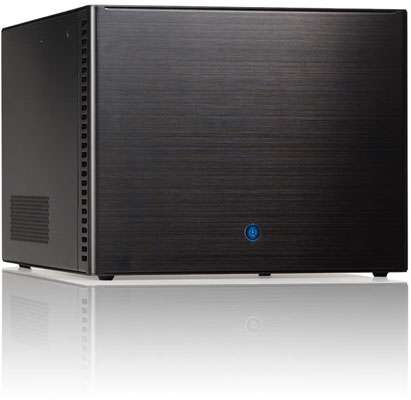 With testing done, what did we think?

The Fractal Array R2 is an exceptional case when used for what it was designed for. As stated earlier, one could install a double slot GPU, assuming it will fit lengthwise – but the option is there. This opens up the chassis to other, more adventurous souls and could potentially make a great LAN box if you can keep your hardware below the level that the PSU can power. That said, we used the R2 as a home server machine, running Windows Home Server 2011 for our testing and in that scenario, the Array performed admirably. It was a bit cramped but nothing that would cause me to personally shy away from choosing it for my next small form factor build.

The Array R2 will fit right at home with those of you that run more than one than a couple of machines on your home network. Those of you that are interested in NAS, and want to build it from the ground up, keep the R2 in mind. It’s one of the few mini-ITX cases available that can hold the amount of hard drives that it can. With the potential to stick 18TB of raw storage in the hard drive cage and still keep it all at a reasonable temperature, it’s extremely difficult to look past the Fractal Design Array R2.