The inside of the Define R3 is completely black with the exception of the hard drive trays, PCI slot covers and the included rear 120mm fan. While not removable, the motherboard tray has an opening behind the CPU area to allow changing of your cooler without having to remove the motherboard. For those manufacturers STILL not using this design element, you are falling behind. I will personally never purchase a case that lacks this feature as it’s a no-brainer and makes life on everyone easier.

Surrounding the CPU area of the motherboard tray are six holes that can be used for cable management. Each are sealed with the same rubber grommets that we saw on the water holes on the back of the case and each are sized for average use. The holes near a motherboard typical power connector are wide, while the holes near the bottom are smaller.

Capable of holding up to eight hard drives, the trays are designed in the same theme as the rest of the Define R3. Near silent operation. 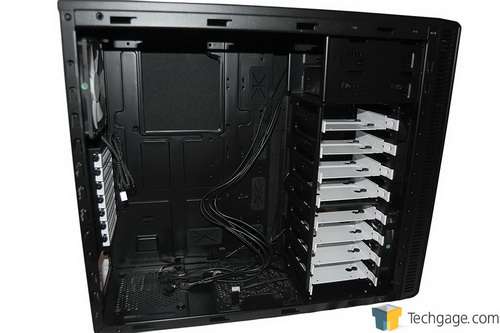 At the top of the case we can see the pair of foam covers used to seal up the dual 120mm fan openings. They are approximately ¼ of an inch thick and should be able to prevent most sound from escaping the chassis. 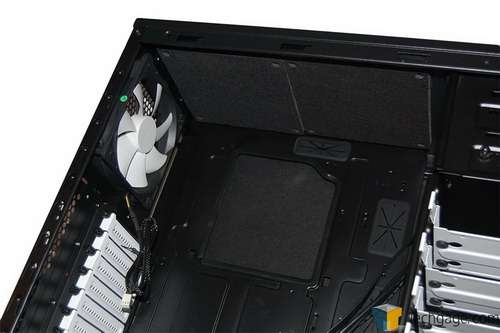 Along with the removable filter that we saw underneath the power supply area, there is another filter for those that want to add yet another fan to the case. Able to either pull cool air from the bottom of the case or expel it outward, you can install another 120mm fan, bringing the Define R3 up to seven possible fans if one would be compelled to populate all available areas. 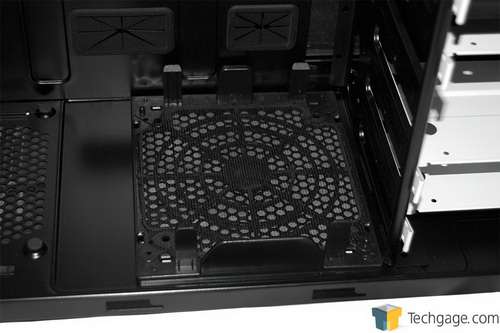 As mentioned earlier, the hard drive trays are white and contrast well with the all black interior of the Fractal Design case. Capable of holding either 3.5″ standard hard drives or 2.5″ SSD drives, the trays slide in and out of the case by simply pushing the tabs inward. By attaching your drives to the trays using the provided screws and rubber bases, the possibility of a loud hard drive due to vibrations in the trays are eliminated completely. 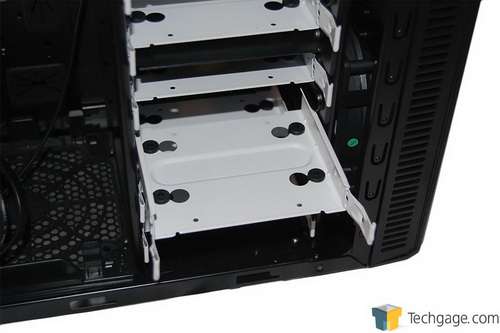 By moving the rubber bases inward, you can use them to mount a 2.5″ laptop or SSD hard drive. 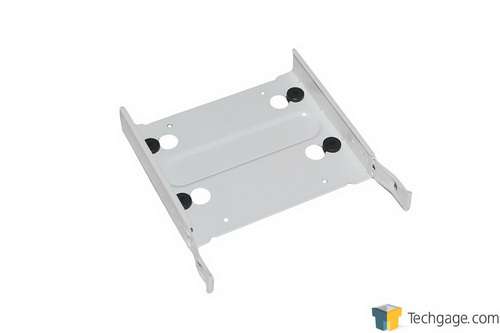 Let’s get on with installing some hardware into the Define R3, and test out its cooling performance.