Installation of my test hardware was an enjoyable experience, and the only problems faced were those that I face with any case. The Define R3 proved to be more than ample to work in and for a mid-tower, offered plenty of room for my quickly aging GeForce GTX 260.

With either of trays for hard drives, I was able to space the drives I have out with enough room for additional airflow from the front mounted 120mm fan. It should be mentioned that in the picture I have an additional 120mm fan installed, but this picture was taken some time after testing completed and all temperatures recorded were with the Define R3 in its stock configuration.

Faced with the typical rat’s nest of cables being thrown up out the back of the power supply, I tried to make the most of the situation but still had trouble with the excess cables. With the Define R3 being a mid-tower, it lacks a lot of the nooks and crannies of a full-sized chassis. With that said, I tried to route things as best I could, I honestly did, but it was all for naught given the number of cables left over after everything was connected. However, the power cable and all other necessary cables were easily routed behind the hard drives and fed into their appropriate positions. 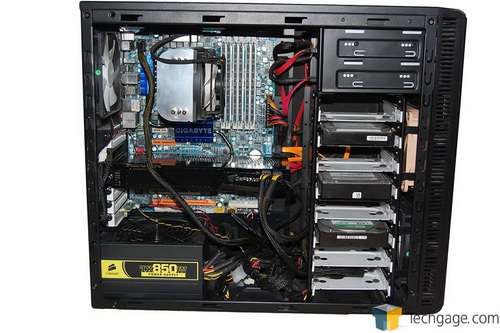 For those of you with a power supply that isn’t modular, installing a fan at the bottom of the Define R3 might prove impossible. You could put one in place and get a fan guard if you like but with so little room to work with, you just might not get much air flow .

I purchased this GIGABYTE motherboard, so I suppose it’s my own fault, but I cringe every time I build a system with this hardware because of the auxiliary power port at the top left of the board. Thanks for nothing, barely-short cable. It should be mentioned however that the appropriate holes were at the bottom of the motherboard tray but with the cable being just a bit short, I was forced to hang it across the front of the graphics card.

The components user for testing:

With Ryan handling the majority of our case reviews, I won’t be able to compare the Define R3 to those reviewed by him. That being said, with the majority of our most recent chassis reviews focusing on performance-minded cases, it might make sense to omit this one from direct comparisons. However, I do feel that the Define R3 could find itself at home with performance-minded users. Regardless, the team at Fractal Design has clearly geared the Define R3 towards those looking for subdued yet refined aesthetics and be that as it may, we are testing this one on its own.

For testing, the ambient temperature was kept at a constant 72 degrees Fahrenheit. As in Ryan’s reviews, AIDA64 Extreme Engineer is used for monitoring and recording all system temperatures throughout the entire testing process.

Testing is run on a vanilla install of Windows 7 64-bit. An idle temperature is taken of both the CPU and GPU before stress testing begins. To load up the CPU IntelBurnTest was used and ran for 20 minutes. For the GPU, we ran OCCT’s built-in test for 20 minutes as well.

Tests were run at stock clocks and no overclocking was attempted. Having got this i7-920 close to 4GHz, I know the headroom is there but for the purposes of this test, we opted for stock clocks on both the CPU and GPU. It should be mentioned that the GPU is already substantially overclocked direct from XFX. 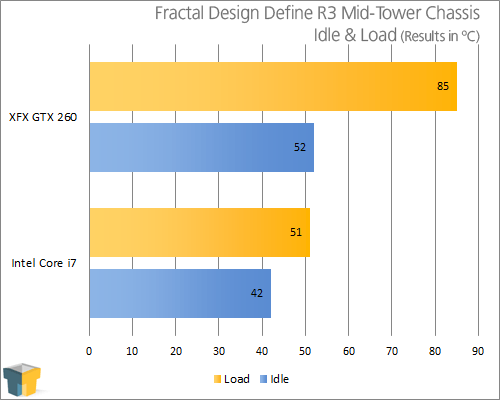 With nothing to compare it to, the numbers mean little. However, I would like you to take one thing away from this; temperatures never once reached anything near critical temperatures. On the contrary, the Define R3 is more than capable of keeping your hardware at a level well below what most consider acceptable. While I’m not completely surprised, I am happy to see that even with the acoustic material lining the sides and front of the chassis, temperatures were kept in check. A lot of that speaks to the quality of the Arctic Cooling Freezer 7 Pro Rev 2 but it, like any other cooler, needs cooler air to effectively work. The Define R3 is more than capable of providing that.