Before jumping into Freespire, I had a grudge towards it for reasons mentioned in the intro. I have to admit though, it is indeed getting better, and is a good beginner OS. The installation was one of the fastest ever… taking only 8 minutes total. The hardware detection is mostly great, so I don’t have any immediate issues there. One thing I enjoyed seeing, was the fact that the NVIDIA driver was already installed and ready to go. Not the stripped nv module, but the full fledge NVIDIA driver so that you can jump into OpenGL games or view the cool KDE screensavers.

I have to say that I found it odd that Freespire did not pick up on either the USB sound or my NICs on my Intel system, which consists of an ASUS P5WD2-E Premium board and 820 D processor. I can’t explain the USB audio problem, but I can the NIC. I had assumed that because the kernel used was older than the motherboard, it could be the culprit. So I downloaded the source for that same kernel version, and had a quick look. 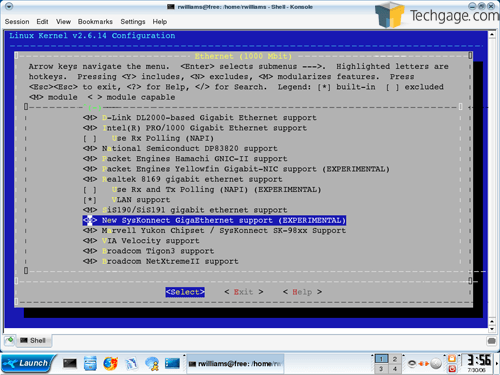 Support for the NIC on this motherboard, and other newer models, is known as SysKonnect Yukon2 support (Experimental) in newer kernel versions. Obviously, this is not present in this specific kernel version, and is the reason my NIC would not function. I tried other modules to see if any would work, but they would not. While the installation went awry on the Intel, I had no problems at all on my other PC (AMD, DFI Ultra-D). 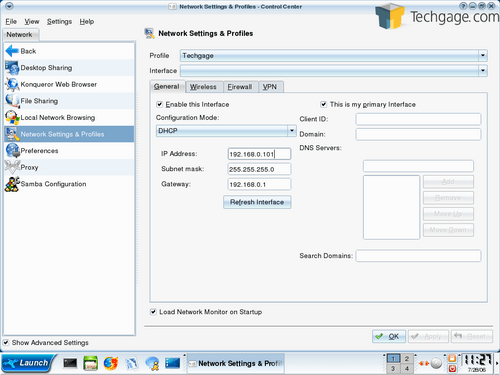 Freespire is meant to be a base OS. It’s up to the users to go online to the CNR service to get the other applications they want installed. That’s fine for the most part, but there are a few things I have to question. vim is the only CLI text editor on the system… which is strange because it’s hardly a novices tool. nano is my personal favorite as it’s quick and simple, but it’s listed under the CNR submenu in the program list. Needing to go onto CNR for such a small program seems silly to me, really.

Luckily though, nothing really stops people from downloading the programs themselves and compiling them. Since apt-get failed me, I did just that. However, I was lucky to want a simple program, but wanting a larger one will just bring on some good problems. I tried to sign up for a CNR trial in order to get Kaffeine, because I wanted to test out DVD playback. However, after signing up, I had an abrupt error that stated a ‘problem has occurred’. So I tried a different e-mail address and ran into the same error again.

I then tried apt-get, but quickly found out that there are issues here also. It downloaded the base files for Kaffeine, but it seems that’s all it did. I was unable to download and compile the program myself, because Freespire does not include the KDE header files that it requires.

One weird problem I ran into was the fact that whenever I tried to execute a program that required sound, and even some that didn’t, they would not begin due to a JACK error. In the below picture, Firefox was the program that should have started, though I had the same problem with the AIM icon. Disabling the sound system entirely fixed this up though. JACK is definitely not a great sound system to include here, because problems seem to be frequent, and not only by me. 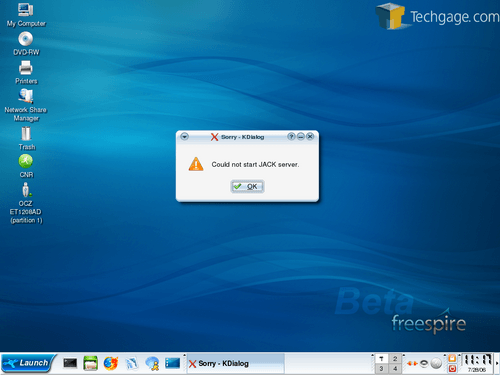 One thing that I find Freespire lacks is customization. When you head on into your Control Center, the only theme listed is for the base system. Though Windows is no better in this way, it would have been nice to see the default ones that are included with KDE anyway. Users are still able to change the color scheme, but the stock skin we have to start with isn’t exactly a visual treat. Besides the main theme, the rest of the OS looks great… especially the wallpaper and icons.

Even with all these problems right now, this is still beta software, so I am hoping to see these problems fixed as it evolves. Up to now, I have been complaining about things that experienced users may complain about, however, for an operating system for novice Linux users, this could be great choice. My hardware problems are likely due to my specific motherboard, since it worked in my other computer.

This is an OS that anyone can just sit down and understand. CNR makes it incredibly easy to install new applications, and to some people, that will be well worth the $20 annual fee. The reason is beats the pants off apt-get/yum/emerge is because it’s all website based, and users have the ability to view screenshots, information and more about programs before they decide to give anything a try. 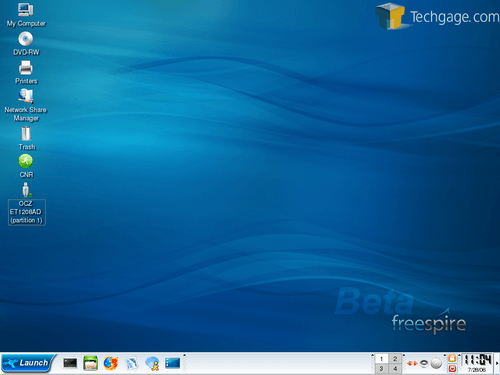 If I had to choose what I’d like to see changed in upcoming releases of Freespire, it would have to be more updated software and the option for more customization. As it stands, Freespire is a great OS for people who are looking for an alternative, but do not want to learn Linux to a good extent. It’s so well catered to novices, that I can’t immediately think of why any new user would need to use the command prompt, unless they have run into a problem that forces it. The way the system is designed, it’s almost hard to break. In the end though, if you are a user who wants to learn Linux at all, you’d be better off going with any other distro out there, such as SUSE or Ubuntu (Or Kubuntu if you want KDE).

I look forward to seeing how Freespire evolves, and plan to take another look in a few months.