Just released is Futuremarks latest system benchmarking tool, PC Mark 2005. We take a look at what’s new, and tell you what you need to get an uber score.

As with all benchmarking programs, PC Mark’s goal is designed to give you an overall idea of the performance your computer will deliver. As said in the intro, it tests all components in your computer, from your CPU, GPU, Memory and even your hard drives. Anything that you add or remove from your computer will affect your overall score. For instance, if you upgrade your memory or CPU to something faster, it will increase your PC Mark score, or at least should.

Of course though, it doesn’t just check out what hardware you are using, and spit out a number. It stresses all the components to the highest degree to see just how much performance it will press out. As an overclocker, the program is one tool that my toolbox doesn’t want to be without. The ease of use is unlike any other, one click.. that’s it.

I primarily overclock my CPU, GPU and Memory. When I run the program beforehand, then after the overclock, it gives me a general idea of how much performance I gained. Even though the program is a great benchmarker, there are many people who disagree. Why? Because it is a synthetic benchmark, and doesn’t show how your PC performs in the ‘real world’. Of course it performs the same tests on everyones PC’s, but that’s how it should be. That way everyone is on the same line, and some can see areas their PC that could use work, and for others, they can just sit back and watch their e-peen grow.

Prior to this version, Futuremark had released 2002 and 2004 editions. As computers become more advanced, as they do at an unbelievable rate, they release updated versions to reflect this. So what exactly does their ’05 edition have that ’04 doesn’t? Let’s check out the feature sets of both: 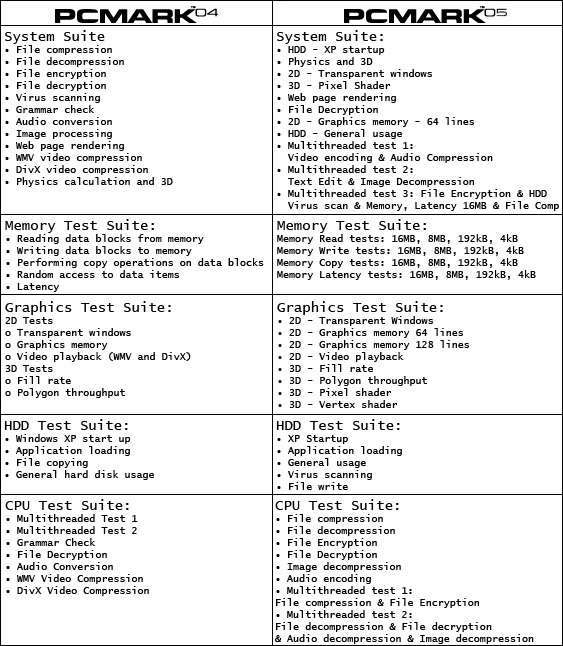