Just released is Futuremarks latest system benchmarking tool, PC Mark 2005. We take a look at what’s new, and tell you what you need to get an uber score.

As stated in our news posting last week, PC Mark ’05 launched a new naming scheme for future Futuremark products. Free, of course is for people who want the basic version, and that’s all most people will need. Advanced, for users who want more variety, including more tests and options. Professional replaced the Business Edition, and is meant for just that.. businesses who want to use it for commercial use, and need multiple copies.

This is only the third version of PC Mark, but has come a long way since the 2002 version, which was under the Madonion tag at that time. As mentioned earlier, it’s a great tool to calculate your performance, and as you tweak your system, you can quickly see if it had any benefit.

One thing I can say is, Dual Core CPU’s are going to love this program. If you have a Dual Core processor, you will immediately have better results. If you had two identical setups, but one with an FX-55 and the other with an X2 4800, I am sure you would see at least a 500 score improvement, due to the fact that Dual Core will eat up some of the tests. While most people won’t usually compress audio and encode video at the same time, it’s quite evident that Dual Core is the future, and your score will reflect that.

Whereas 3D Mark is obviously a gamers benchmark, people can still get a great idea of their results by comparing to others. At the time of writing, the ORB shows someone with a X2 4200+ with Radeon 9800 Pro beating out a 3.3GHz Intel with a 6800 Ultra. So it goes to show, even if you have an incredible video card, it’s also the rest of your system that matters. 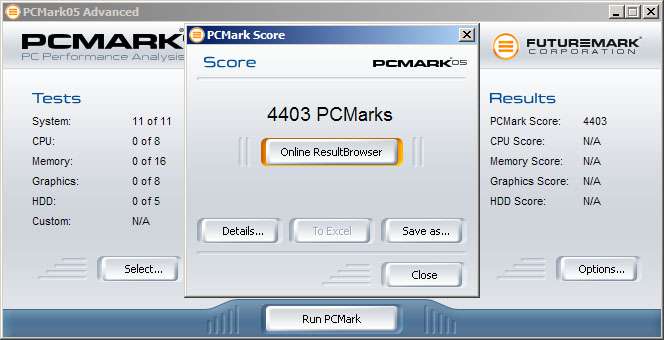 Overall, I enjoy using this program very much. As with all Futuremark products, for the Advanced license, it only costs $19.95US, or $9.95US if you own PC Mark 04. This is hardly a price to complain about, considering all the features included. Even with the low cost though, it would have been welcomed to have the custom suites available in the Advanced version.

Either way, if you want a great system benchmarking program, I highly recommend PC Mark 2005. To download the program, check out the Official Site and select from a variety of mirrors. For those who want to purchase, you can access their store there as well. Remember: If you own PC Mark ’04, select the upgrade on the bottom of the selection page to save yourself $10.

For those interested in checking out the ORB result from this review, or you just want to know that your computer is better than mine, you can check out the result here.

If you disagree with anything I have said in the article, feel free to discuss it in our related thread. Comments/Questions and flames are also welcomed. Registration is free, which is good due to the fact that they are currently damned ugly forums ;)