Throughout this article, I’ve elaborated on many emulators that I’ve had great luck with. However, there are still many out there for you to try that I didn’t mention. That’s not to say I ignored a few popular ones though, because I didn’t. I just happened to have a lot of problems with a select few, two of which I will discuss here.

I had high hopes for a Saturn emulator because it’s one of the best consoles that Sega has released. The game selection was great, especially if you were a fan of imports. Radiant Silvergun or Soukyugurentai anyone? Yabause is the only Sega Saturn emulator for Linux, and I was hoping to have a similar experience as I had with the PSX emulator. That was not the case, at all. 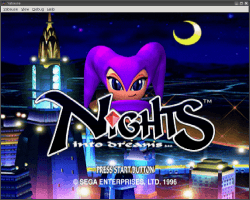 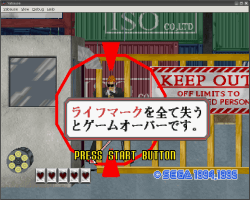 Although many of the games I had worked, they didn’t work well. In the shots above, you can see that the Nights Into Dreams title screen was displayed properly, but once I was in the game, the video was so incredibly messed up, that it was virtually unplayable. It had a serious rainbow, trance-like effect. In the right screenshot you can see Virtua Cop, which happened to be within the 10% of the time where you could actually see what was happening. Needless to say, support for games in Yabause are low. So low, it’s to the point of not being worth a try.

I did manage to run Daytona USA however, but still had some random graphic glitches. It was fully playable and ran well. Out of the 7 or 8 games I tried, it was the only one to work reliably. If you insist on trying it out anyway, you can check out the compatibility portion of the official site. While support is still a little iffy, Yabause is still in development, albeit a slow one. I truly hope to see a version that has wider compatibilities in the future.

If you have been in tune with the emulator scene for a while, you are probably well aware that one of the most difficult consoles to emulate was the Nintendo 64. I am not sure whether it was due to the fact that it had a generally difficult operating procedure or if the 3D graphics is difficult to emulate. Either way, it’s difficult to find a reliable N64 emulator. 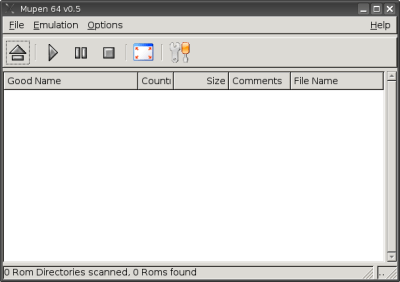 mupen64 is the only N64 emulator for Linux and is rather robust. It has many options to toy with and many plugins to download. Support is great, so it’s worthwhile to give it a try. My experiences have not been good, however. I’ve tried on and off for the past month to have a few different games function properly, but none of them would. The game would either sound really good and have choppy or distorted video, or the video would be good and the audio horrible. It seemed like a lose/lose situation.

The emulator is still in development, although a new version has not been released in almost two years. In my personal experience, I had no luck. However, there are many plugins and configurations to play around with, so you might have better experiences than I did.

We hope you have enjoyed our in-depth look at game emulation under Linux. If there is one thing you should walk away with its that, on a Linux platform, gaming possibilities are endless. Many people do not consider game emulators to be “games for Linux”, however, with them a huge world is opened. Equipped with any, you will have a large supply of games to play with. It sure beats hauling that old dusty console out of the closet!

As you have seen though, hauling out a console from a closet to play is not the only deterrent, or reason why gamers prefer emulators. Good emulators vastly improve the graphics of older games, and some actually run smoother than the originals, thanks to faster CPUs.

There are so many other features though as well. Internet play, screenshots, quick save-states, ability to game on the go, better gamepads, better sound… the benefits are vast. You might have noticed that I did leave a few lesser known consoles out, most notably portables, but there are many of those available as well. Don’t be afraid to search for a console emulator, because chances are good that one exists. The only other system I really wanted to see an emulator for, but didn’t, was the Sega Dreamcast. I guess we can’t have it all!

If anyone ever tells you that games are non-existent to Linux, now you can rightfully tell them that there are thousands upon thousands. Sure, it’s a half-truth, but it is possible ;-)

For a completely summed up list of the emulators we discussed today, you can go to the next page where I have put together a table summarizing everything. Though this article was strictly Linux based, we have also listed alternative emulators for those using Windows and Mac OS X as well.

Safaribans from our forum urges those interested in a good all-around emulator for multiple platforms to check out Mednafen. We left this one out because we decided against including emulators for portable platforms. From the official site, “Mednafen is a portable, utilizing OpenGL and SDL, argument(command-line)-driven multi-system emulator with many advanced features. The Atari Lynx, GameBoy (Color), GameBoy Advance, NES, PC Engine(TurboGrafx 16), SuperGrafx, Neo Geo Pocket (Color), PC-FX, and WonderSwan (Color) are emulated.”