Three months ago, I took the first Gateway notebook to hit our labs for a spin, and for the most part, I was impressed overall with the general design, performance and mostly, the price. The T-6836 was well-designed, didn’t feel “cheap” as you’d expect a >$700 notebook to, and as a result, it was recommended overall. The issue with that article, however, was that due to a “mistake” on my part, the review lacked some overall substance.

The issue was that I didn’t properly create restore discs… something that should be done as soon as possible. Being used to other manufacturer’s notebooks before it, I became accustomed to an included restore disc, but that didn’t work out to my favor that time. As a result of having no proper restore CD, I didn’t feel I was able to deliver the most-accurate review out there, so I followed-up with Gateway shortly after to receive another notebook, and the M-7818u is what arrived.

This time, I knew better than to format without creating some restore CDs first, and that’s something I’ll tackle on the following page in more detail, since as far as I’m aware, Gateway is one of the few notebook manufacturers that require the user to take care of this task.

The T-6836 notebook we took a look at last time fits into Gateway’s value-targeted category, while the M-7818u we’re looking at today is a step-up, and is considered a multi-media offering. Given the price of this particular model ($779.99), we’re can’t expect an explosive multi-media experience, but it should certainly be sufficient for most needs.

As mentioned above, today’s model is M-7818u, which is only available at OfficeMax. Gateway works differently than some other notebook manufacturers, mostly Dell, and doesn’t allow customization before purchase. Rather, they’ve teamed up with numerous retailers and sell specific models at each. This can be a little odd, as it makes getting the notebook you want more difficult, but as long as you don’t hold any ill regard towards a particular retailer, you can usually order it online. That’s the case with this particular notebook, as it can be ordered directly from OfficeMax’s website.

If you are interested in this model, but wish the configuration was a little different, you might want to head over to Gateway’s site and check out their M-series section, which at the current time lists 18 different models, so there’s a good chance that one might better-suit you. Color schemes will sometimes vary, however, which is one downside.

So let’s take a look around the notebook and see what it’s made of. The specifications will be taken care of on the next page, with the performance data on the final page. This particular model is very similar in design to the T-6836 that we took at in September, but that’s not a bad thing. On this model, the color used is Garnet Red, which I happen to love. I should mention that our photographs brightened the shade a little more than I’d like, and in person, it’s a bit darker… closer to a light maroon color. 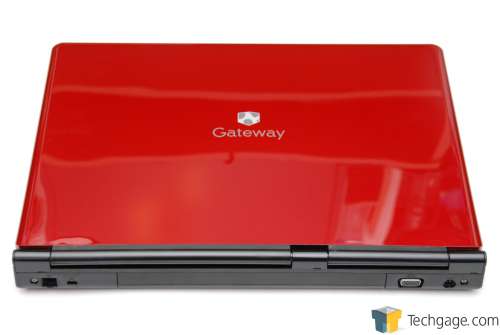 Upon opening, the first thing you’ll see is a thin spongy sheet covering the entire keyboard, which protects both that, and the screen, during shipping. Though it’s rather brittle, you might be able to reuse this for some time, or reserve it for use while traveling, where the notebook will probably be tossed around. You’d have to make sure there is no debris whatsoever on the keyboard or screen, however, as the extra push could potentially cause some scratches. 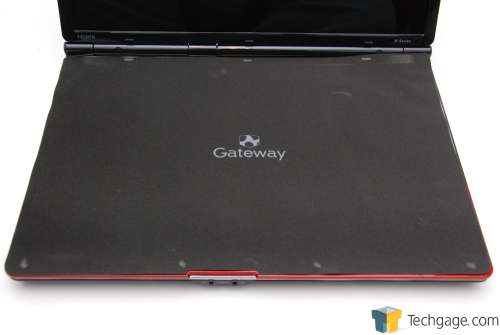 The trackpad used here is good overall. It’s not uncomfortable to touch for long periods of time, nor does it heat up to any great degree. The buttons for the most part are also well implemented. During regular use, they’re rather easy to tap with your thumb. The black portion directly below the buttons here includes indicator lights that will show depending on a particular status. In most cases, you’ll see the HDD indicator light as well as the WiFi activity. The input/output audio ports are found at the absolute front. 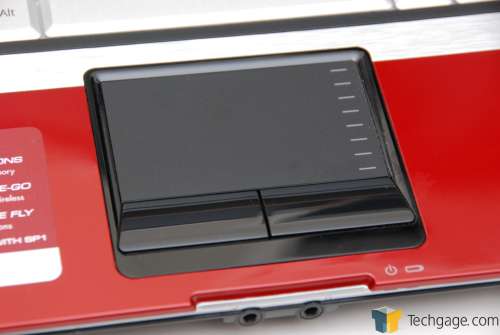 If you read our T-6836 review, you’ll notice some intense similarities here. The layout is generally the same, with the same keyboard, media buttons and power button. The brushed-aluminum look returns here, and looks sharp overall. The gray-colored keys also make a return, and also look good, next to the faux brushed-aluminum. I enjoyed usage of the keyboard overall, and given that it’s full-sized, it’s unlikely anyone will have a rough time transitioning from a desktop to this notebook. 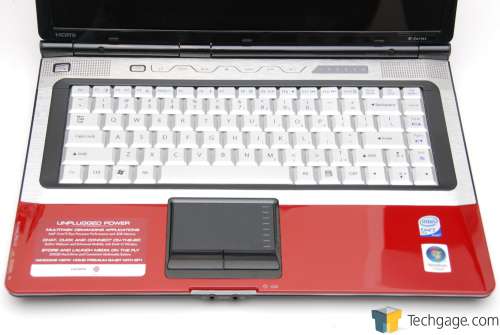 For a closer-look at the keys, look no further than the photo below. I have no major complaints with the layout, although the lack of a numpad might brush seem people away. Given the size, however, adding a numpad would decrease the overall size of the main keyboard, so it’s a definite trade-off. Also, one personal gripe I have is that the Ctrl key is not found in the leftmost bottom corner, like it should be. Rather, the Fn key is there, which can at times make a simple Copy/Paste a chore, if you are used to the Ctrl being where the Fn is, which would be understandable. You become used to it after a while, though. 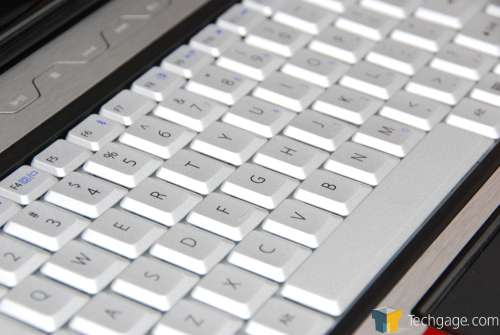 One reason this notebook deserves its “multi-media” likeness is because it includes HDMI support, which is a huge deal if you have a computer monitor with such a connection, or your television. Also on this side of the notebook (left), you’ll have access to two USB ports, network port, ExpressCard type 54 slot, memory card slot (SD/MMC/MS/xD) and also the WiFi enable/disable toggle. 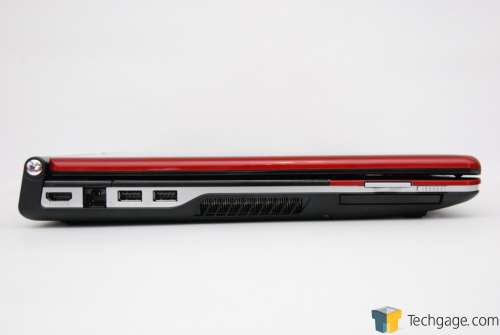 There’s a lot less happening on the opposite side (right), with only the DVD-RW drive being available, alongside one more USB port. There are a total of three USB ports on the entire notebook, which should prove efficient for most people. 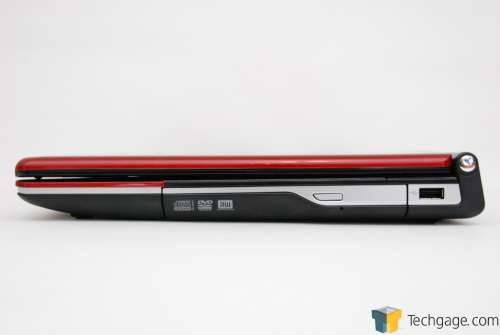 At the back, we find a modem port, Kensington lock, a VGA connector and also the power port. Given the price-range of this notebook, I was pleased to find both an HDMI and VGA connector, which in itself adds quite a bit of value. You could use the HDMI for your TV, or VGA for your monitor, if it doesn’t have an HDMI port. It’s great to have the option of either, not just be stuck with one. 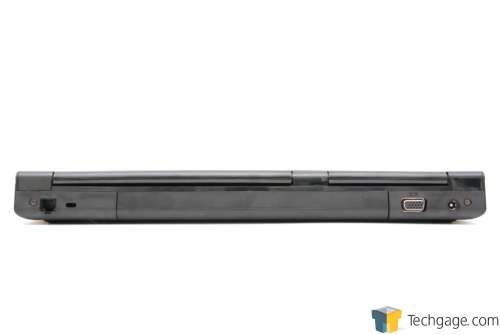 Finally, underneath we can find the various air holes and panels removable for upgrades. Both the RAM and hard drive are fully accessible, so if you want to upgrade to a larger hard drive, the option is there. Given that this notebook and many others ship with 4GB of RAM now, there’s no reason to ever consider upgrading to more, as the rest of the notebook is going to become the bottleneck. Although, if you desire even faster RAM, either with higher frequencies or lower latencies, or both, it’d be one option. 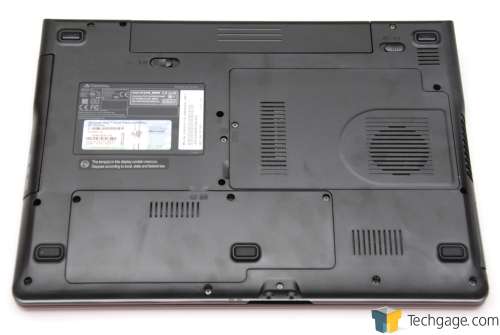 Gateway has done a solid job of packing as much value into the design of the notebook as possible. Although not pictured (since the reflection ruins all photos), the M-7818u includes a 15.4" screen and a 1.3 megapixel resolution web cam at the top, as is common of most notebooks produced today.

After much use, I don’t have any show-stopping complaints, although I do wish the volume dial located next to the top-right speaker was a little more accurate. Though it looks like it’s designed to support sliding of the finger, it’s not. Rather, you are meant to push lightly on the – or + to decrease or increase the volume, which in the end is a rather slow process.

For the most part, though, that’s the most “major” complaint I have about the design, and for a $779, I feel there is a good amount of value wrapped in here.