Before we dive into a look at the software and performance, let’s first review the M-7818u’s specifications. Being a value-oriented multi-media notebook, we wouldn’t expect high-end components, and that’s reflected in the below table. The CPU might be one of the largest bottlenecks, although it still should prove sufficient for most people. The T5800 is Intel’s last-generation Core 2 Duo mobile chip, so it’s of the 65nm variety, and lacks certain perks such as Intel’s SSE4 extensions.

If production work is a goal while on the go, the second bottleneck might become the memory. While 4GB is sufficient for all needs, it’s the overall speed that will slow things down a bit, but mostly in image manipulation scenarios. DDR2-667 used to be a standard, but DDR2-800 has since pushed in and has become a better choice. This is a value-driven notebook though, so small corners must be cut somewhere.

Other than the CPU and memory, the rest of the notebook is pretty-good, with a large 15.4" display, supporting a 1280×800 resolution, along with sufficient connectivity options, including the much-welcomed HDMI port. If you find yourself lacking in overall hard drive space, upgrades are now less-expensive than ever, but 250GB is still a healthy amount of space to deal with.

On this particular sample, talking about installation would be moot, because simply turning it on brought me straight to the desktop after its quick boot… no halting along the way at all. This means that the notebook was already given a username, and all other configuration set, but I’m really unsure if that’s typical design. However, nothing at all was changed on the desktop, so I assume it might very-well be. 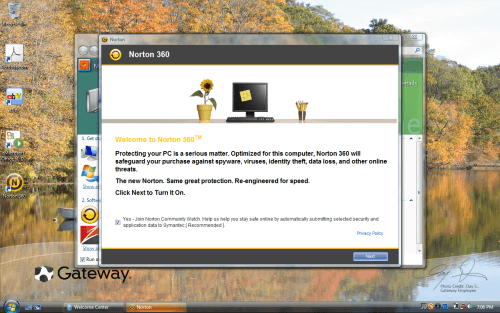 The fact that the username was set is a little strange, since with notebooks, customization is something people usually look forward to. But, that’s easily changed. You need to go to the user accounts configuration under the control panel, and after selecting the main user, you are able to change it to whatever you like. As far as I’m aware, that will not change the name of the actual folder (C:UsersUsername), but everything else will be reflected to the new name after a reboot).

To help keep notebook prices low (and probably also to help generate more revenue), Gateway pre-loads a handful of applications and URLs. Each of these can be uninstalled if you don’t like them, through the Uninstall Programs section in the Control Panel. This “bloatware” includes: 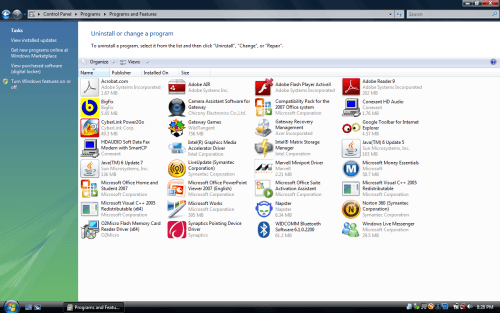 Aside from those, Gateway also pre-loads a lot of software for the sake of convenience. Some people might consider some of these pieces of software to be bloatware, but for the most part, some of it is stuff people will wind up installing at some point anyway. These include:

For the most part, there is a lot of software pre-installed, but it only takes a few minutes to uninstall whatever you don’t need. Hassle it might be, but if it helps keep the notebook less-expensive, it’s not too large a burden. Speaking of burden though, as I mentioned on the first page and the last Gateway notebook review was that rather than including a restore DVD with the notebook, you’ll need to create your own. This to me is a chore that people shouldn’t be expected to do, but the process is rather simple.

The tool used is Gateway’s Recovery Management, which offers you to both back up according to two profiles, as well as restore. The first option below creates a complete factory default disc. It will save all the settings on the PC, including applications installed, and when restored, you will wind up with a desktop reminiscent of the first boot. The second option creates a disc that only saves the drivers and applications, which would be useful if you wanted to install your own copy of Windows (such as if you had a preferred edition). 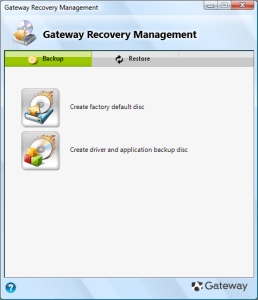 Once you select an option, you’ll need to put in a blank DVD or CD and allow the software to burn whatever it needs. For this particular system, two DVDs were required, but if you wanted to take the CD route, you’d have to have 13 handy. I think it’s safe to say that the DVD route would be the best one. 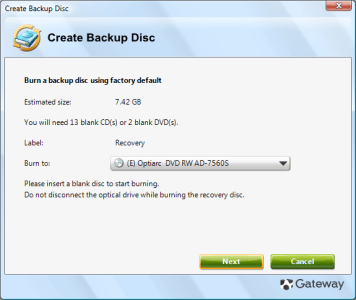 The entire process took around a half-hour, which included both the burning and verification process. For the most part, it’s a painless process, but I still find it a little strange that users must take it upon themselves to take care of this. Gateway obviously does this to save money, given they have so many models available, but it’s a chore nonetheless.

Things became a little more clear as I tested out the restore discs, however. From what I can tell, it doesn’t matter when you choose to create these restore discs, because changes I made prior to creating the discs didn’t stick after I went ahead with the restore. This is a good thing, because you wouldn’t want poor configuration changes to be carried through with each fresh restore, since that defeats its goal.

Rather, after the restore process finished, I was greeted with the usual Vista setup that I’ve become accustomed to on other brand-new notebooks. This wasn’t a simple restore that again brought me straight back to the desktop. This time around, I was able to choose my username, along with a few other small options. Five minutes later, the notebook was ready to go.

What I figure from this is that Gateway allows users two choices in setting up their notebook. Those who want to get things done fast, can simply boot up and use it. But, if they want a more typical “Out-of-Box Experience”, then they could create the restore CDs, and go ahead and restore it. That to me is not that important, since the only real difference I could see between the two was the pre-set username, but that’s easily changed as I mentioned earlier.

Now that I’ve been able to toy around with this backup/restore feature, I like it quite a bit, but I still don’t understand why Gateway couldn’t include the discs to begin with. If it’s this easy to create them, then you’d imagine it’d be even easier for Gateway. However, I will mention that I love the ability to create multiple sets of restore discs with this tool. In fact, I’d highly recommend that, since it only takes two DVDs per set. Keep one handy, and store the other one, just in case. No other manufacturer I know of allows the creation of these discs so easily, so that’s one perk.