Before we tackle the results, let’s quickly review our basic notebook testing methodology. The first steps in preparing the notebook for testing is to use a fully-restored OS install and by uninstalling all unnecessary applications. This is done in order to both optimize the notebook and also remove services that could be running in the background, potentially effecting test results. Also, Windows Search Indexing is manually disabled as well, to further help with producing accurate and repeatable results.

Once the machine is prepared for benchmarking, it’s shut down and set on a flat surface with plenty of room for airflow, until it’s completely cooled down. Once benchmarking gets underway, the machine is boot and left to sit idle at the Windows desktop for five minutes, at which point testing begins. Each test is run through twice, with a reboot taking place in between each run.

In the case of some of these results, their meaning is not so important as we recently upgraded out general methodology and haven’t tested other notebooks via the same methods. Future notebook reviews will have more comparisons, but if you are curious to see how this notebook compares to others we’ve reviewed in the past, feel free to take a look through our notebooks section. 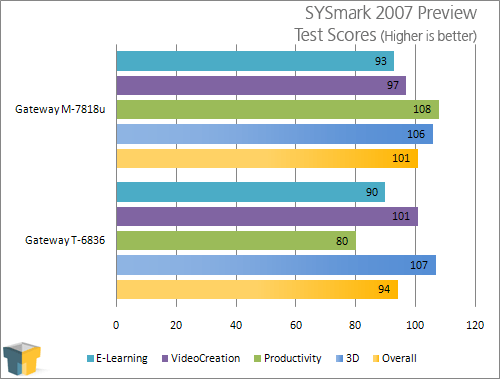 Because both of Gateway’s notebooks that we’ve taken a look at so far have been more budget-oriented, we’re comparing just the two in our SYSmark 2007 test. Here, the differences between the notebooks is minimal, but interesting since both include pretty comparable hardware. The M-7818u does feature Intel’s latest mobile chipset, however, which might be the primary reason for the increases.

For the most part, the M-7818u performed well throughout all of our tests. None of the results were too exciting, but as long as you don’t have a serious need for processes finishing as fast as possible, you’re sure to be pleased with the performance exhibited here.

Though while performance might be a little lacking for some people, what did impress me was the battery-life. Being a slightly-larger notebook than the T-6836, I was expecting shorter battery-life, but that wasn’t the case at all. In the case of our e-Book reading test, you can see that the M-7818u lasted just over five hours, which for the most part is great on any notebook out there, much-less one with a full 15.4″ display.

Where a DVD movie was concerned, the battery-life was still very impressive, at 2h 40m. That’s long enough to get through most movies in your collection, if not all… very nice to see. Also, as a result of our MobileMark 2007 installation not playing well (this is not the fault of the notebook, but the software), we were unable to run the usual productivity suite that comes with it. So in order to test out general battery-life with a heavy workload, we ran SYSmark 2007, which lasted 2h 10m before shutting down.

I should note that SYSmark is a benchmark that tests the performance of a PC, and it has no concern for battery-life, so it’s constantly throwing work at the PC and hard disk with short 3 – 5 minute breaks in between each run. Although it’s impossible for me to predict an accurate battery-life report for an average person, I’d expect that during normal use, including WiFi usage, the notebook should last at least a full three-hours, if not three-and-a-half hours.

For the money, Gateway has a great offering with their M-7818u. After taking a look at the T-6836 and being left with a poor taste in my mouth, I’m glad to have been able to have taken a more proper look at one of the company’s other offerings. The biggest issue with their notebooks still remains to be the lack of an included restore disc, but as we saw, it’s very easy to create your own, so at least there’s that.

After being able to use this notebook for the past few weeks, I’m pleased to recommend it to anyone who’s looking for a notebook in this price-range. It’s not the fastest offering out there, but that’s to be expected at $779. For the money though, Gateway packed a lot of value into what’s offered here. The caveats are primarily the lack of extras (no notebook mouse, for example) and the obscene amount of “bloatware” pre-loaded.

For the most part, the design is great, and the build doesn’t feel flimsy. Gateway also promises scratch-resistant paint, although I’m not sure to what extent that promise would be upheld. I wouldn’t drop it and expect it to look brand-new, but it should remain pretty clear of scratches after being thrown in many backpacks or briefcases. 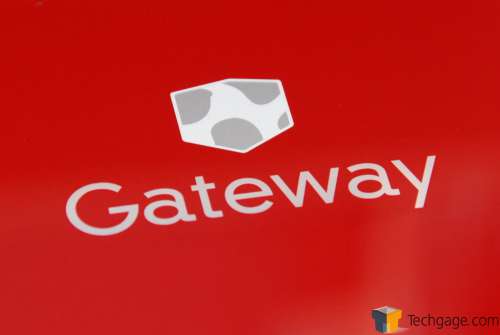 I’m not personally a fan of the top array of media buttons, and found them a little clunky… especially the volume dial. This could be due to personal taste, but I like pushing a button and getting some feedback. With this notebook, I’ve pushed these buttons more than once simply because I thought I didn’t push it hard enough the first time. The volume dial is the biggest issue, though, as you’d have to hold your finger on either the – or + for ten seconds to get it from the top to bottom, or vice versa.

To test the notebook for the ability to handle 1080p content, I used VLC to load up a 1GB 1080p video file that averages out to a ~10Mbit/s video bitrate. While not as high a bitrate as say, Blu-ray, it’s common of really high-definition files in a downloadable format. In the case of this video, the 1GB delivered close to 18 minutes of video, so a full movie would be closer to 5GB. Technical data aside, the video played just fine, the entire way through, without a single skip. That’s good news for those who want to bring their media with them (and an HDMI cable as well).

Overall, this is a great notebook for the money, and it’s priced very competitively. So if this has everything you need and want, you won’t be disappointed. If you are looking for more in way of hard drive space, desktop real-estate or anything else, you can check out Gateway’s other M-series models on their website. I’d expect our findings to be generally the same (save for performance) throughout most of them.