Late last month, Gateway released three brand-new notebook series, all of which have the goal of delivering a quality product for less than $1,000 USD. The MC is their multi-media specific series, which features a large 16″ display with edge-to-edge glass, in addition to illuminated buttons on the keyboard. There’s also the UC, which happens to be the company’s first-ever 13.3″ offering. Coming in at 5.2 pounds, the company hopes that given the $799.99 USD SRP, users who love small, yet powerful notebooks, will give it a look.

Lastly, the MD series was also released, which is where the notebook we’re taking a look at today belongs. It’s similar to the MC series in that it’s targeted at multi-media use, but it’s more of a value-focused option, so we lose the edge-to-edge glass and also the illuminated keys. Coupled with all of the features each series offers, and the fact that each one retails for under $1,000, either one is well-worth a look if you’re in the market for a new notebook.

Of course, it may seem like I’m jumping the gun here, but if Gateway’s previous notebooks are anything to go by, then I’m confident each new series should deliver the goods, especially after having given the MD7826u a good test over the past few weeks. So let’s get to our reports!

The three new series from Gateway aren’t simple revamps of their previous models, but each one sports a brand-new design, and I have to say, the change is refreshing. Compared to their M-7818u which we reviewed a few months ago, there’s simply no comparison with regards to which one looks better. That opinion will of course vary, but I definitely know which I’d choose first.

We’ll take a look at the actual specifications for the notebook on the following page, but for the rest of this one, we’ll take a brief tour around the MD7826u and see what’s new and available. As we’ve mentioned in previous Gateway notebook reviews, the company usually picks and chooses which retailer to send a particular model to, so one model may not be available at more than one e-tailer with the same configuration. The MD7826u is one of the oddballs though, because it is available all over, including at e-tailers like Amazon, CompUSA and Newegg.

The first thing you’ll spot on the MD models is the stripe which runs down the center of the cover. There’s no purpose to this other than to look good. If you look close, the end chrome piece displays the company’s name. While we received a dark red version of the notebook, a jet black model is also available. 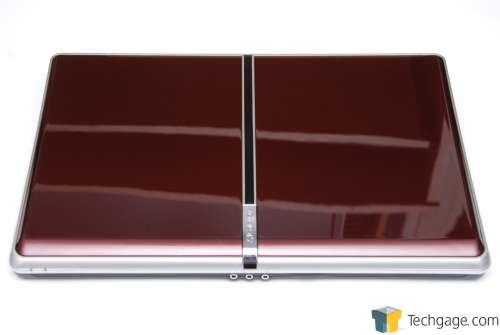 If the cover didn’t tell you that this notebook was different, maybe taking a look at the keyboard will change your mind. Well, it’s not just the keyboard, but the entire surface area of the inside. It’s unlike any notebook I’ve seen before, and a far stretch from Gateway’s previous offerings. One immediate downside I notice, though, is the lack of a numpad. On a 15.6″ notebook, one should be standard, but Gateway had an obvious goal in mind, and losing the numpad wasn’t done without thought. 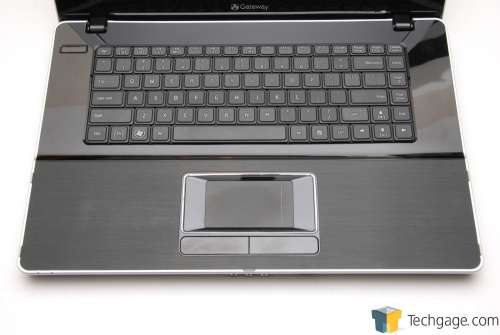 The clean area around the keyboard isn’t wasted, as there’s orange back-lighting used here to keep you up to date on the various status’ of the notebook. On the right side, the backlight illuminates a volume dial and media keys, and it looks pretty sharp, especially in the dark.

One thing I do really like though is the extremely clean design. Because Gateway moved some of the media buttons to become really subtle, the only button to be found other than the what’s available on keyboard is the power on/off button. You can’t get a much cleaner look than this.

This area of the notebook is produced with two different textures, a glossy plastic around the keyboard, and a faux brushed aluminum palm rest. Both textures integrate well into each other, and the palm rest is one of the best I’ve used to date. Plastic palm rests can end up rubbing against your skin in the wrong way after long periods of use, but I didn’t find that to be the case with the solution here. 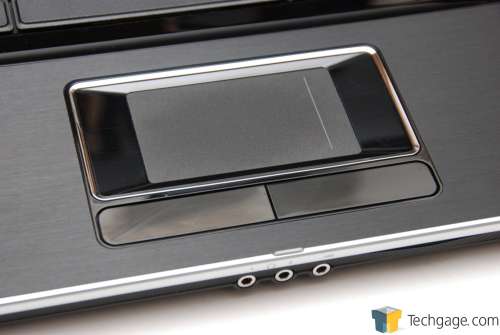 Likewise for the touchpad, which is very smooth and easy to use after hours of time. The temperature there never warms up to an uncomfortable level – a big plus. The left and right buttons are flush with the rest of the notebook, and are easy to push if you are in a normal sitting position or even lying down.

Now to the keyboard, which is unlike any I’ve ever seen on or off a notebook before. Similar to chiclet-style keys, all keys are elevated equally and feel the same. Those of you who love keyboards that give a little bit of tactile feedback will love this, although it does take a look getting used to, like most notebook keyboards. It took me about an hour before I got on a roll and felt I could type comfortably, and reliably. 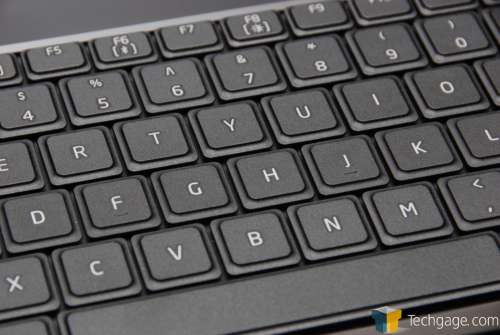 In the photo below, you can see how the notebook opens up. During normal use, the bottom of the panel will hide behind the back of the notebook, and the result looks nice overall. 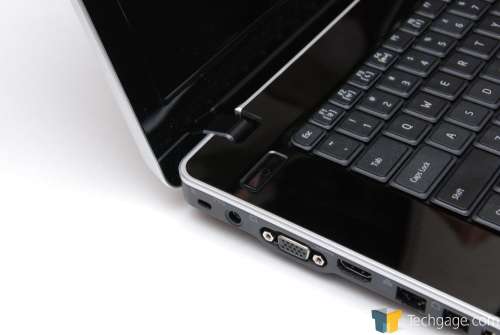 Where connectivity is concerned, the MD7826u has got it all (almost). On the front, you’ll find the audio ports, while on the right-side you’ll have access to two USB ports and also the ODD (DVD-RW). 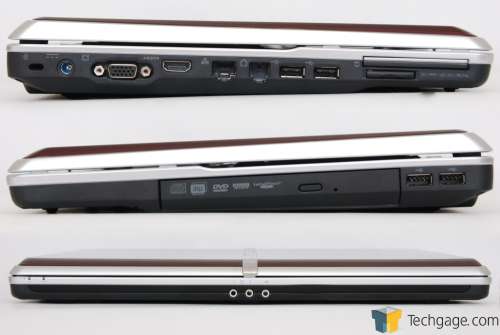 On the left side is where the vast majority of peripheral connectivity is, with both a VGA and HDMI port available, in addition to a LAN, modem, two more USB ports, an ExpressCard slot and of course, a memory card reader.

I admit that at first, I wasn’t totally sold on the general design of the notebook, especially the cover (I tend to hate “racing stripes”), but after a fair amount of use, the entire design has grown on me. Even though I wasn’t keen on the cover, opening the notebook up changed my mind completely. I absolutely love clean design, and this is about as clean as it gets. Past that, the peripheral connectivity is top-rate. So with that said, on the following page we’ll get a bit more into the specifics.